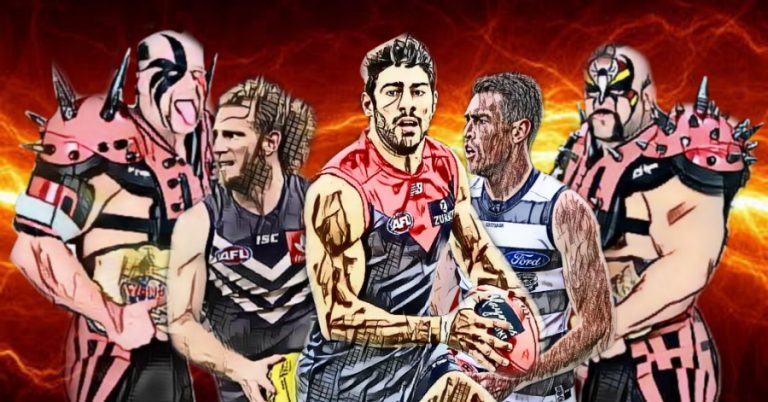 The Road Warrior Ladder – Round 16

And just like the AFL Ladder, the Dees have hit back after a slump and now sit atop The Mongrel’s Road Warrior Ladder once more.

Can they be toppled?

THE ROAD WARRIOR LADDER AFTER ROUND 16

Two movers this week, with the Dees flexing their muscles in Adelaide to pick up their fourth interstate win of the season. Ony Freo has more, and with the Dockers heading to Marvel Stadium this week, and the Dees visiting Kardinia Park, we could have a tie at the top.

Collingwood is the other mover, with their big win in Queensland pushing them into the top eight.

WESTERN BULLDOGS head to Sydney to take on the Swans in what looms as an elimination final for them.

RICHMOND head to Metricon Stadium t take on the Suns

FREMANTLE jet over to Marvel to face St KIlda

GWS head to Adelaide Oval to take on Port

ESSENDON head to the Gabba and face the Lions

ADELAIDE play the Hawks at Marvel… for some reason

And CARLTON travel across the country to face West Coast. This smells like a danger game to me.

MELBOURNE head down the highway, taking on the Cats at Kardinia Park

NORTH MELBOURNE try to claim their first points of the season, going crosstown to play Collingwood at the G

So, every game this week is potentially worth points. Keep an eye on those away teams – we have six teams capable of hitting top spot this coming week.

Wrestling note of the week – Big John Studd was a pretty big name in the eighties as part of the Bobby Heenan Family, but for someone who worked so often with Andre the Giant, he seemed to have a bit of the death wish.

You see, Andre did not like the fact that Big John would step over the top rope when accessing the ring before matches – that was Andre’s thing, and the Giant believed Studd was attempting to steal his thunder. In actual fact, Studd, despite being Andre’s in-ring nemesis for years, was a real sweetheart and continually put Andre over… he just wanted to step over the top rope because it was part of his “being big” gimmick.

Anyway, there was never any physical altercation, but displeasing the Giant wasn’t the wisest move. Studd passed away in 1995, at the age of just 47. Andre went two years earlier, at 46.