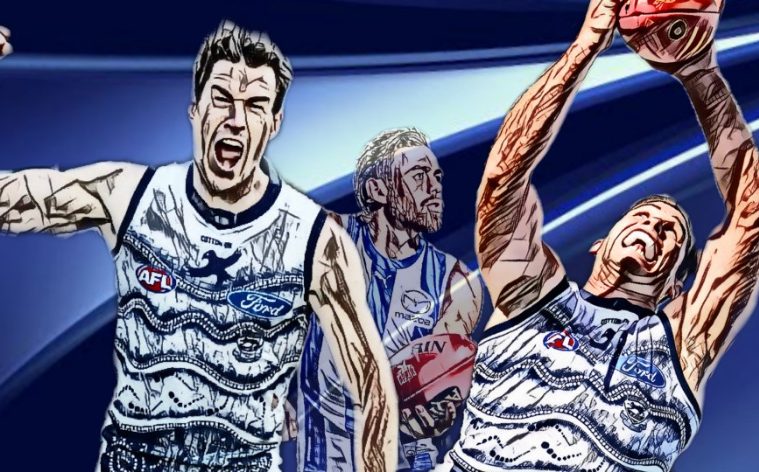 On a cold Saturday night in Geelong, the Cats and Roos renewed hostilities. The Cats brought good form into the contest after their thrilling win against the Tigers last week, but were without seasoned campaigners Tom Stewart and Joel Selwood – and rising star favourite Sam de Koning a late out – while the Roos languished in 18th after being belted by the Crows last week. With a review starting this week at Arden Street, could they respond and capitalise on a smaller Cats defence, or would the Cats keep rolling on and celebrate the 250th game of Mitch Duncan in style? Here are all the key moments.

The Most Underrated Player in the Game?

If you ask Geelong supporters, they’ll tell you Mitch Duncan is the best kick in the game. While stats may not completely back that up, Mitch has long been instrumental in the way that Geelong move the football forward and effectively. He is much loved by the fans and his teammates. He brings many into the game and for the last quarter, his teammates were looking to find him inside 50. He marked just on the full-time siren, but his shot fell short and was rushed through.

The man you’d love to have a beer with finished his 250th with 30 disposals, 10 score involvements and 2 goal assists. He has been a vital cog for his team since he debuted in 2010 – this was seen in the 2011 Grand Final, and many times since. Dwayne Russell referred to him as Geelong’s Ringo Starr – not the main man, or the second main man, but the man who keeps the team together and is important for the Geelong machine.

What Did North Show?

Started slow, Geelong had all the field position and it looked like it’d be a long night. Fought back and dominated most of the first quarter – set the tone in the contest. This effort continued throughout most of the night, without the scoreboard turning over.

North competed at the coal face and their defenders stood up for two and a half quarters, until the avalanche of Geelong goals and inside 50’s (74-25) couldn’t be quelled. Praise must be given to the likes of Luke Davies-Uniacke (match-high 35 disposals, 17 contested possessions, 7 clearances, 5 I50’s), Jy Simpkin (27 disposals, 9 contested), and Hugh Greenwood (19 disposals, 8 tackles, 10 contested possessions). These guys competed all night and were instrumental early in the way the Roos controlled some field position.

If you weren’t aware that Patrick Dangerfield was back at the start of the game, 12 seconds in you became acutely aware. It was vintage Danger, exploding out of the very first centre bounce and launching a thumping entry into the forward fifty, that rolled through for a goal.

The Brownlow Medallist was on managed minutes for tonight’s game, but still managed 19 disposals (7 contested), 6 clearances, and 8 inside 50’s to go with his goal. He competed, and had a few of his trademark bursts away from stoppages. He’ll be better for the hitout heading into Thursday night against Melbourne.

North clearly came into this game with the intent to keep possession and systematically work their way up the ground. In the first quarter, they controlled possession for the last half of the stanza, and were able to score. However, beyond QT, the Cats dialled up the pressure and North were not able to navigate a way forward. The Roos lacked the polish to navigate tricky conditions and the pressure with the way they played – similar to how Geelong have collapsed in recent finals series playing that style.

North, however, for much of the game, were strong in the contest and had clearance dominance for extended periods. Their effort was high all night and they kept throwing their bodies into contests. While the execution may have been lacking, the effort cannot be faulted. Part of their inability to transition may have been the loss of Aaron Hall to a quad injury early in the game. He is their link man, and he is responsible for setting up their ball movement.

The Cats made some tweaks after quarter time. While they kicked the first few goals of the game, North worked back into the first quarter and the Cats only held a single-figure lead. After the first change, the Cats were ruthless in their ball movement and physicality. The Cats were more in the face of their opponents and harassed at the contest, forcing turnovers and kept moving the ball forward. There were moments where they kept possession, but were more content keeping the ball in motion.

Geelong led all of these stats as the final siren blew. Early, North was competitive in clearances and contested possessions, but for the final three quarters, the Cats just dominated in all the key stats. So much so that Tom Hawkins (6.3) outscored the Roos (5.2) himself, as a by-product of the Cats dominance.

Central to some of the dominance is Tom Atkins. The unheralded Cat was moved into the midfield in R11. Since then, the Cats have gone from 11th to 2nd for contested possession differential. His pressure, hard-nosed play, and willingness to put his body on the line has straightened up the Cats in the contest, and has been vital to covering the loss of Brandan Parfitt, Patrick Dangerfield, and Joel Selwood at various times. He again led the game in tackles with 11.

Tom Hawkins finished with game highs in goals (6), score involvements (14), and joint contested marks with 2. Much has been made of his goal-kicking record. Less talked about – by some – is his willingness to bring his teammates into the game. Tonight, he went into outright second all-time for goal assists, league wide.

As good as Hawkins was, for the first half, in particular, Josh Walker was equally as good. He limited Hawkins’ influence early in the game, and halved a number of contests. As the Cats got on a role, Hawkins did get on top, but the former Cat & Lion battled all night.

Gryan Miers is maligned by Cats fans. They often question his position in the side. Tonight, he showed why. Some of his kicks to open up the fat side or to hit the corridor were outstanding. Miers moves the game and ball forward, and opens up the game for his team, which is why he is there – even if his kicking technique isn’t great.

Tonight emphasises why all teams (and I’ve said this before) need home & away guernseys – or, at least, a clash option. It was hard at times to pick out which team various individuals played for when the ball was on the far side (until the camera zoomed in). AFL, please bring in multiple playing strips for clubs and maybe have someone who isn’t completely colourblind assess what the teams will be wearing to minimise clashes.

The Cats lost Tom Stewart to suspension, and rising star Sam de Koning before the bounce. Their defence held up – partly thanks to the way the whole team defended, and their mids ability to move forward – but Jake Kolodjashnij (until a third quarter head knock), Zach Guthrie, and swingman Jack Henry competed well and halved a number of contests, allowing the lieks of Jed Bews and their mids to swoop in and propel forward.

One final highlight for the Roos was Charlie Lazzaro. While he may have finished with just 16 disposals, he ran hard and was a great link-man in the first half when the Roos had moments of momentum and hold field position dominance.

Jeremy Cameron was a great foil to Tom Hawkins – he went up and down the ground all night to finish with 30 disposals, 4.3, and 12 score involvements. The Cats duo are 1st (Cameron) & 3rd (Hawkins) in the Coleman Medal and share 2nd in overall score involvements.

It was a rough night for North Melbourne – and not a great start to a period where the club is going through a review. It can be hard to find positives, but the team must build on what their key ball winners did all night. They face Collingwood on Saturday afternoon at the MCG and need to show something. Meanwhile, the Cats host ladder leaders Melbourne in Thursday Night primetime at Alphabet Stadium in Geelong, in a battle for top spot on the ladder. Will there be Max Gawn heroics at the Cattery again? Will the Cats continue building? Tune in on Thursday night to find out.