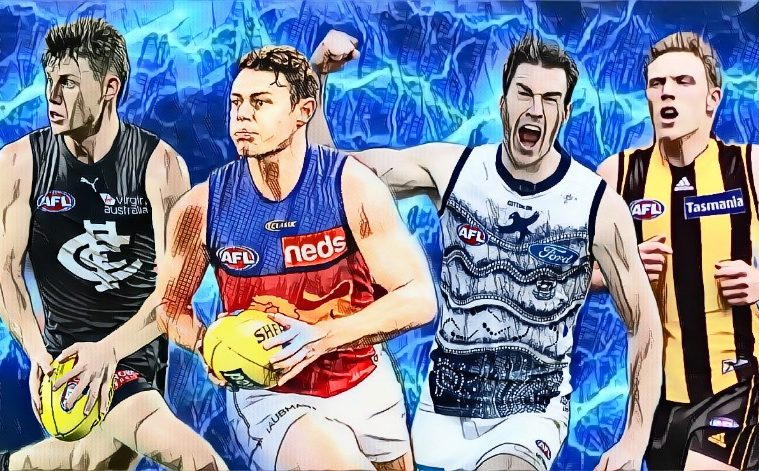 Four weeks is an eternity in football. When we locked our team in suspended animation, things all seemed normal. Melbourne were the standard-bearer, despite a small slip up, Brisbane was the clear number two seed, St Kilda was roaring towards top four, and West Coast were an utter embarrassment.

Four weeks later, and the Demons looked increasingly shaky before flexing their muscles, the Lions took giant strides, only to fall apart when the whips were cracking, the Saints have floundered, and are in danger of missing the eight altogether, and the Eagles improved, finally snapping their losing streak.

Four weeks is also an eternity for our team of superstars, and changes are indeed necessary. Come with me, on this glorious journey, as we resurrect the Mongrel Punt All-Australian team.

Our team has undergone significant change since the bye rounds commenced. In the last four weeks, seven players have elevated themselves into the team, which truly highlights the evenness of the competition. Those that dropped out have vastly differing reasons for omission, and rather than focus on the inclusions and exclusions separately, I have decided to meld them into one.

Key defenders Steven May and Jacob Weitering were always going to face a near-impossible uphill battle to retain their places, given both men missed significant minutes. May’s absence was partly self-inflicted, while Weitering will miss more time through injury. Now that May has returned, he can go about the business of repaying the faith of All Australian selectors (Me), and earn his way back, which he started on Thursday night with a dominant defensive display against the Lions. At the time of writing, Weitering is considered a chance to return to the Blues’ defence, and his return cannot come quick enough for Carlton’s finals hopes. But both May and Weitering are now on the outside looking in, which makes their return to our team that much more difficult.

So who replaces them? Centre-half-back was easy, given who was already positioned in the back pocket. Since making his return from an ACL injury, James Sicily has been enormous in Hawthorn’s defence, regularly playing as an undersized key defender, and doing so magnificently. Sicily is also wonderful offensively, highlighted by his 22 disposal, nine mark effort against the Dogs.

Full-back was a little trickier. It came down to two players. Sun Sam Collins and Giant Sam Taylor. Collins has become one of the best key defenders of his generation, so much so that Luke Beveridge felt the need to highlight Collins’ defensive efforts on Aaron Naughton in an attempt to draw the umpires into paying Naughton free kicks. Sam Taylor has also come on in leaps and bounds, but often doesn’t get the credit he deserves, often because his excellence goes unnoticed, the mark of a great one-on-one defender. Both Collins and Taylor were neck and neck going into round 15, and ultimately their performances this week decided their fates. Collins played on Todd Marshall, and wasn’t his usual dominant self, and Taylor spent time on Brody Mihocek, and performed admirably. In the end, I awarded the points to Taylor, but the smallest of margins.

There was a key defender sitting on the bench, and you might be wondering if he had a case for elevation. Unfortunately for Saint Callum Wilkie, his team’s form slump came at the worst possible time. Unable to stop teams from putting scores on the board was a major issue, and Wilkie has paid the ultimate price, not only being unable to command a place on the field, but dropping out of the 22 altogether.

With Sicily moving to centre half back, a spot in the back pocket opened up. This was an intense game of musical chairs, with Tom Stewart dropping back from the flank to the pocket, and Isaac Cumming being elevated off the interchange bench to take the spot Stewart left behind. This then created a spot on the bench, and I have decided to reward fellow defensive rebounder Bailey Dale. Dale has become a standard bearer for his position, and his performance against Hawthorn was one of his best, in a resume that gets more impressive by the moment. On Friday night, Dale was everywhere, amassing 28 disposals (at an elite 86% efficiency), nine defensive rebounds, seven intercept possessions, and 575 metres gained.

Next, we turn our attention to the midfield. Remember, our rule for this team is that only five midfielders (not including wingmen) will be awarded with selection in our team. We simply couldn’t ignore the form of Sam Walsh any longer, as he has roared into Brownlow Medal contention, arguably now ahead of teammate Patrick Cripps. Walsh has been a ball magnet, evidenced by his season LOW of 26 disposals against Adelaide. At his brilliant best last week, Walsh was best on ground in Carlton’s crucial victory over Fremantle, gathering 40 disposals (at 85% efficiency), 13 contested possessions, 11inside 50s, seven clearances, six marks and six score involvements.

Walsh’s inclusion spelt trouble for one of our midfield incumbents. Clayton Oliver was (arguably) best on ground on the Queen’s birthday, and thus retains his place. Andrew Brayshaw has stepped up in Nat Fyfe’s absence, and if anything is even better now that Fyfe has returned, so he is safe. Patrick Cripps started the season amazingly, and although his output has dipped ever so slightly, he has been very consistent alongside his midfield partners, making him safe for another week.

That left Christian Petracca. I understand that this might be a harsh selection, given Petracca’s brilliance. When making the decision on midfielders, I had to find a place for Sam Walsh. Of the four players I just mentioned, Oliver and Brayshaw were the safest, and I has to choose between Cripps and Petracca. Petracca’s best has been superb, as has Cripps. But I felt that of the two, Cripps has been slightly more consistent. As harsh as it may seem, the decision was made to bring in Walsh, and take Petracca out. Walsh also replaces Cripps in the starting midfield, and Cripps drops back down to the interchange bench.

Another Melbourne player that had to fight for his place was Ed Langdon. Langdon has had a stranglehold on the wing, but series of unfortunate events has dented that armour. First, coaches are beginning to work out the method in stopping Langdon’s effectiveness, which has given teams’ hope that the Demons’ game plan can be brought to a halt. The other event that has worked against Langdon is Tarryn Thomas, who flattened Langdon in round 10. The Demons struggled in Langdon’s absence, and he really hasn’t looked the same player since the Thomas tackle. After another sub-par performance against the Lions, Langdon couldn’t hold his place any longer.

The choice of who replaced Langdon came down to Isaac Smith and Karl Amon. Both players have been superstars for their respective teams, but which has been better? Both have played all 14 games. Amon has the higher disposal average, Smith the better disposal efficiency. Amon leads in contested possession. Smith has kicked more goals. But what swayed the decision was the next three stats. Amon leads Smith in clearances, goal assists and tackles. After recording an elusive “quadruple double”, Amon had done enough to overtake Langdon for the second wing spot.

Finally, we focus on our forwards. There was plenty of movement, perhaps more so than in the back half. Bayley Fritsch has become surprisingly consistent, and has kicked goals when other around him have not. Sitting eighth in the Coleman race, and first amongst small/medium forwards, Fritsch has kicked 32 goals, and looms as an even more crucial cog in Melbourne’s premiership defence, given Tom McDonald’s extended absence.

Centre half forward is a battle of the big cats, and there could only be room for one. In the bye rounds and beyond, Geelong’s forward line has belonged to Jeremy Cameron, and in many ways, Cameron has almost made teammate Tom Hawkins surplus to requirements. This isn’t meant as disrespect towards Hawkins, far from it. Hawkins is still vital to Geelong’s fortunes, and his 36 goals still sees him fifth on the Coleman table. Cameron however, has charged ahead, sitting second on that same table with 42 goals. Hawkins may have been more consistent, but Cameron has been more outstanding, and the switch was made.

With Coleman leader Charlie Curnow safe at full forward, we needed to address the third tall, Max King. Like Wilkie, St Kilda’s worrying form slip has come at the worst time for King. No longer enjoying the same forward delivery as the start of the year, King has slipped down the pecking order of key forwards. In his last four games, King has only managed six goals, and there simply needed to be a change. When deciding on the replacement, I turned my attention to last year’s Grand Finalists, and their forward talisman. The current bronze medallist in the Coleman race with 38 goals, Dog Aaron Naughton has been a lone hand in the absence of Josh Bruce. Surprisingly consistent (surprising because he keeps nailing goals despite not appearing to gather much of the ball), Naughton has kicked eight goals in his last two matches, and has overtaken many of his contemporaries to clinch the final spot in our forward line.

There were three inclusions to our forward line, but you may have noticed I only mentioned two omissions. Where did the other player go? For that answer, we must revisit Callum Wilkie. In omitting Wilkie, a place on the interchange bench opened up, and it’s only now that his position has been filled. Bayley Fritsch takes his place on the half forward flank, and that meant moving Lion Zac Bailey out of the way. Bailey’s form is still good enough to avoid the fatal axe, and he is simply dropped down to the pine.

Let’s talk about the elephant in the room, or rather, in the back pocket. At the time of writing, Tom Stewart has just been handed a four-match suspension for his late bump on Richmond’s Dion Prestia. Now, I understand the point of view that some of you will take. Given this suspension, how does Stewart continue to deserve his place amongst the best in our game? I thought long and hard about this, and had Stewart not been best on ground on Saturday, he may have been given the flick. But after gathering 29 disposals and six marks, Stewart’s 2022 form still warrants inclusion in the 22. However, this is very likely to change in the coming weeks.

We’re back in the full swing of things here at Mongrel HQ, and in the blink of an eye, finals are on the horizon. 12 teams are still in contention for a place in the top 8, and even those on the outside looking in can still wreak havoc on those charging towards September. Another glorious round of football awaits, and I can’t wait to see it.