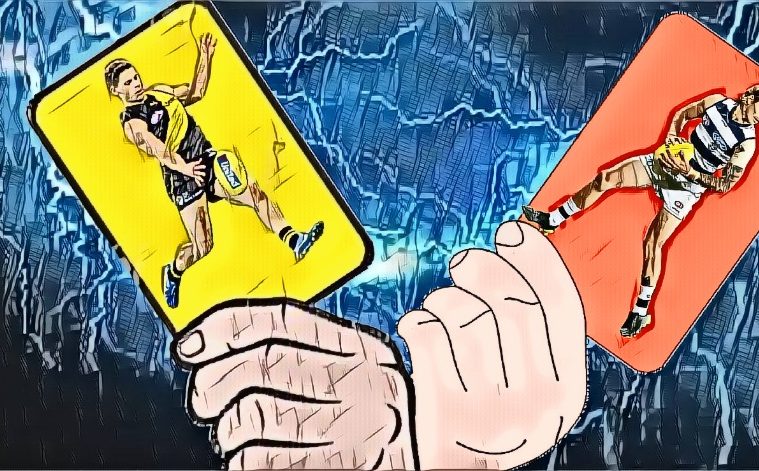 Seeing Red – The Case For Cards in the AFL

Earlier this week, fellow Mongrel, HB Meyers released a piece outlining why a red/yellow card system should not be implemented in the AFL.

In the interest of balance and fairness, it is now my turn to offer the other side of the argument.

HB’s article can be found here

Cards Off The Table

As someone who has both played footy and gone onto umpire the game, I have a reasonable and educated understanding of what’s expected by an umpire. As such, I feel I am in a good situation to offer some counterpoints to HB’s article denouncing the prospect of introducing a card system into the AFL. Here is my rebuttal.

So, on the weekend the AFL world bore witness to a crude bump by Tom Stewart on Dion Prestia that re-ignited the debate of “Should there be a card system in the AFL?”

As my colleague HB has delivered his passionate argument regarding why that might be a horrendous idea, I’m here to discuss my beliefs as to why I think a card system is a necessity in circumstances.

So… Stewart decided to bump an airborne Dion Prestia, late and high – leaving “Meatball” looking like he was Mike Tyson’s punching bag. While Stewart is looking down the barrel of a lofty suspension, he was able to carry on playing the game, and in a game decided by under a kick, his continued presence in the game really should have not been permitted.

It was, in fact, lauded by the commentary team about how he “responded under adversity” and “showed tremendous mental fortitude” pretty much applauding the way he applied himself after infringing in a manner that left a player knocked out, and earning probably a month on the sidelines. Just to put things in perspective here, if Stewart was to get three weeks suspension, that equates to 12 missed quarters of football, whereas Prestia was not only ruled out due to concussion in the first quarter, but will also miss another round due to the AFL mandated concussion protocols- seven quarters of football. Seems wrong on that front, however, during the game, Richmond were not only forced to make their medical sub, but the only in-game penalty Geelong received against them was a downfield free-kick that was probably eight metres from the spot Prestia was dazed and confused.

Had Stewart received his marching orders, we would be looking at a whole new ball game.

The card system is a touchy subject; people dead against it are mainly worried about integrity and error, and that’s understandable considering the inconsistencies in the game today, however, how ridiculous is it that a card system is more than acceptable in our junior and country leagues, yet frowned upon at the highest echelon?

For instance, if I was to walk out this weekend for my local side and belt a bloke immediately I would be staring down the barrel of a massive suspension, plus hit the showers immediately. In the AFL however, I could belt the guy at the first whistle, incur a free kick to the opposition team, accept my penalty was coming – yet have a profound impact on how the game plays out. Just like Matthew Lloyd when he knocked out Brad Sewell as he incurred a four-week suspension, however, he knew it was his last game had he lost anyway. How about when Alistair Lynch decided to attempt to take Darryl Wakelin’s head off 2004, copping a ten-week suspension after retiring? What about when St Kilda’s version of Tony Lockett took off Peter Caven’s head with a massive elbow, copping a six-week suspension?

All of these examples are cases where a player has done massively wrong, yet their team was still in a massive positional advantage to win (more so Lockett and Lloyd). Just for reference, last time I checked, the AFL is the only major sporting code that does not grant powers to officials to disqualify a player.

My belief is that a card system implemented properly will fix things. I’m talking about the big incidents that 99% of fans know straight away “yep that’s weeks”. I’m not just referring to the “thug acts” (Hall on Staker, Solomon on Ling, Jonas on Gaff, Bugg on Mills, Gaff on Brayshaw) but also “footballing actions” mainly very late bumps and slam tackles (Gibbs on Robbie Gray, Dempsey on Deledio, May on Martin) for example.

For one, I would leave the discretion COMPLETELY up to the umpires, and let the MRP f**k up on their own time. The main thing the umpire needs to judge is “is this conduct worthy of a sending off?”

I would suggest a yellow and red card. Yellow is a sending off and a review undertaken by an accredited umpire, basically if a field umpire is of the belief a serious incident has occurred but they want a review- this can be done in real-time as the game continues, and the video umpire determines if the card is upgraded to a red, or rescinded in error.

I would implement a yellow card for less serious offences down the road (striking or tripping) if the AFL is especially invested in eliminating the gut punches, however, there would be teething problems, as some of the AFL players have already verbalised a tactic to “draw free kicks”. With the card system, the infringing team is at an immediate disadvantage, plus I would not allow the infringing team to activate their medical substitute to cover the disqualified player. The video review should take no longer than a standard interchange anyway, plus if a card is rescinded then the MRP can determine if any further punishment shall be handed out, in case they believe any untoward action occurred.

Removing the player from play will also stop quick whistles, as teams and umpires expect the tempo to lift immediately, as the team that has just lost a player will want to respond physically – and the umpires are often on edge, paying quick frees to negate “spot fires” and keep congestion minimised. For anybody that watched the immediate aftermath of the Prestia incident, note how many quick whistles occurred once the Tigers’ physicality ros With Stewart done for the game, this does not happen, but also nobody that infringes after the fact can claim they “were reacting” as the player has been sent from the ground. As magnificent Stewart was for the game as a whole (incident aside) his game should have been over the second Prestia’s was.

For the AFL to get this right they simply leave it to the umpires to judge there and then, and for those that defend the sending-off in the context of Tom Stewart citing “football act” I will agree, he was undertaking a football act (the bump) however the “action” (a late bump to the head) it was not – and that’s what the umpires need to adjudicate, in terms of straight cards.

If there is any doubt with the video review, just send it to the MRO and let things take their course from there. Give the video umpire access to any broadcasts and replays to make his decision, the quality of video for field play is much better then the Motorola flip phones they use for goal reviews. For the naysayers that bring up “netball” and “soccer” – you can be sent off in both of those sports.

There are probably not many that are not fully invested in one outcome or another, however, perhaps this at least outlines something worth diving into later down the track – before this type of incident decides a flag…