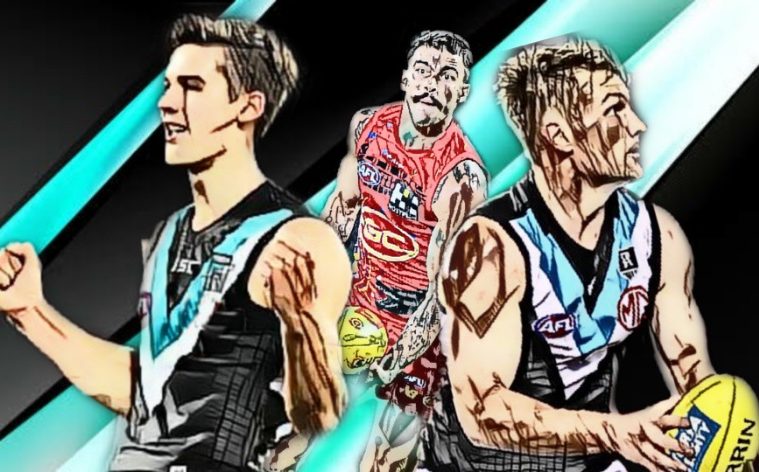 On a Sunday night, The Gold Coast Suns travelled to the Adelaide Oval for a middle-of-the-table clash between two clubs chasing the same dream with two very different stories.

Port Adelaide started the year dreadfully but has been able to steady themselves, at least for now, and keep their slim finals hopes alive, in what could be a dramatic fall from hosting back-to-back home Preliminary Finals in 2020 and 2021. There is a faint pulse down at Alberton thanks to their 6-2 run since being 0-5, with their only losses coming to Geelong and Richmond (both away).

Gold Coast were looking to show they can get it done in the second half of the season, as their abysmal record post-round eight often draws the ire of the footballing world wishing to question their legitimacy as a club. However, this Suns team feels different. There’s a harder edge to them. They are no longer the team that simply wilts when things don’t go their way and they have dug in for this season.

My interest in this game really peaked around the way these teams will move the footy and structure up. Would Sam Collins go to Dixon or Marshall? Who will stop Izak Rankine? How much will Witts dominate without a recognised Power ruckman? I was also salivating at the match up of Rowell and Miller vs Wines and Boak.

But enough of that, let’s get into The Stuff that mattered…

Just absolutely dominated this game in the first half. When Witts wasn’t lacing out teammates with his sublime ruck work, he was doing it himself and taking the ball out of the ruck and creating something for the Suns to work with. People will say that he should’ve been more dominant, but I think that’s a bit harsh on Witts. He is arguably the best ruckman in the competition at the moment and nothing in this game said anything otherwise. Sure, Dixon came late and hampered Witts’ impact to an extent, but when Dixon wasn’t with him he was still just as dominant. If he didn’t have some very poor foot skills on a couple of occasions, he would’ve been the most damaging player on the ground.

Rozee was in the good category at halftime. He was having a solid game and proving a player of difference as he had telling disposals that lead to Power goals.  Then came Rozee’s third quarter which made him undoubtedly Port Adelaide’s most important player on the park. This game escalated dramatically in the third quarter in terms of quality, and the best players rose with it. Rozee was at the top rising tide. But wasn’t done there, he then had himself a telling last quarter as he stood tall when the Suns came surging. There’s been a lot of talk of Rozee “taking that next step” and based on the last few weeks, he looks to have done that.

I might be overestimating Charlie or romanticizing even, but I thought he was a huge difference in this game. First, you just have to see his goal at the start of the third quarter, which officially marked the increase in intensity and class that Rozee rode. Talk about difficult, how’s a left foot goal from 4o metres out on the run? Second, his absolutely ridiculous contested marking. Third, his beast-like nature as he absolutely bullied those around him. Dixon drew crowds of Suns players just to stop his ability to draw the pressure and still release the footy. And finally, he somehow managed to stop the absolute dominance of Jarrod Witts. Witts was arguably the Suns’ best player, but his influence was noticeably reduced when Dixon was matched up on him in the second half. This may have just been the move that won Port Adelaide the game.

Great game. This guy just works his absolute guts out and he does it going both ways. Ainsworth is arguably the most important link in the gold coast chain. His delivery inside 50, his presence around goal, his defensive pressure, his ability to stick the tackles against some seriously strong opponents. Crunching tackles as well. You feel them. I can’t remember him fumbling the footy in this match either. This includes when he took an absolutely ripping mark in the second quarter when sandwiched between two power players. Seriously tough. Ainsworth was another player who elevated when the game did, refusing to let Power get the break on his team. The only problem with Ainsworth is he just needs to improve his goal kicking. He has to reward himself and his team for all the hard work to get the ball forward.

Very same vein as Dixon. An impact player. Does not need a lot of the footy, he just needs to do what he does well. Be an absolute bull at the contest. No moment was more telling than when Touk Miller looked to try and lift his team in the dying minutes of the game. Streaming out of stoppage towards the middle of the ground. Then in came Powell-Pepper. He ran straight through the fend-off Miller stuck out to try and stop him and absolutely pummelled the Gold Coast star. A long way from the guy was reduced to being the medical sub in finals for the Power last year.

A fantastic game from both players. A hot start by Farrell saw him take the upper hand and then a strong fightback from Ellis saw him level the match up. Farrell probably had Ellis covered in a couple of the times they matched up early, but Ellis lifted as the game went on and Farrell unfortunately faded. Both ended up with good numbers and provided critical links to their teams plays. Farrells left foot is just deadly and he had really good run and created plenty of space. Ellis was just professional and unfazed as he stepped up when the Suns needed with multiple goals in the third quarter.

Just elite, this guy. Houston has no problems when he has the footy in hand. The dashing defender cut the Suns up across half back as he thwarted attacking efforts and sent the ball back with interest that would’ve left the Suns feeling dizzy.

After a slow start and plenty of close attention, Rankine again showed his maturing nature as he worked himself into this contest and proved to be a telling factor for the Suns, particularly in the second half. Three crucial goals and some incredible moments.

Showed some really good signs. A couple of really good marks in the second quarter. He just had a few moments he would want back. Georgiades has clearly been at the Kevin Bartlett school of handballing after his performance in the first quarter, burning Charlie Dixon open in the goal square. Show us the launchpad Mitch…

I remember seeing a stat on twitter a few weeks ago around players and their percentage of contested possessions, and that Rowell was often in the same category as ruckmen in terms of having the clear majority of his possessions being contested. This game was no different. Whether it’s a lack of pace of just some close checking, it just seemed like every time Rowell touched the ball he was being absolutely smashed by someone. I don’t feel bad for him though, he gave it just as good with some of his own tackles. It is still just astonishing to see a kid being such a contested bull in this league.

Not just for his hot start to this game, where he got plenty of the footy and showcased good footy smarts and a clean pair of hands, but also for his glorious mane. That’s right, it’s not a hairstyle, it is a mane. Asserting Jones’ dominance over all around him.

Jones is an effort player. Case in point, his effort to mow down Sam Collins in the last quarter, and then know to immediately bounce up and hit Todd Marshall inside fifty in between three Suns players. All effort and plenty of skill.

Two early out-on-the-full kicks by Lemmens had everyone wondering if he was playing a Kardinia Park, with those skinny wings. Georgiades did spare him the embarrassment of two goal assists, though, as part of a pretty poor couple of minutes of his own.

Had himself a terrible cold or some sort of vocal problem. Maybe take a night off from a job that is focused on people having to listen to you talk intermittently for over two hours. It was really annoying and it really took me out of what was a cracking game of football. (I think it might be the way he actually talks – HB)

I really feel for Graham and Burgess, but they had to offer more for the Suns in this match. Both were found wanting on several occasions. Sure, they both had some good moments, as most AFL players do, but I can’t help but think that if either of them had just held an extra couple of marks, that they really should have, the Suns win this game.

Every Suns fan was probably wishing Steve Bucknor (former test cricket umpire) was the goal umpire out there today.  Bucknor never called an edge he didn’t know instantly and would’ve undoubtedly let Chol keep at least the second one of his two second-quarter points. Kudos has to go to the goal umpire as well, for being good at his craft. Not that Chol probably appreciates it.

Also, if we’re going with this ARC stuff, get some bloody decent cameras! The one that overturned the Power goal late in the second quarter was awful.

Wow. Just a fantastic game of football. It’s a shame there has to be a loser when both teams gave so much. It probably creates a few heart issues among their respective supporters but it provides great fodder for us neutrals. Both teams have plenty to take out of it and I’m sure they are both going to feature in some classic games in the next few weeks.

The Power have officially squared the ledger and now sit 7-7 and a game outside the top eight. I have to say I did not pick this after they started 0-5, I thought they were done, but they are just not letting this season die. Not without giving it absolutely everything. The good thing about this year is there are so many competitive teams. If anyone makes it this year, it’s going to be on the back of good footy, and that is what Port Adelaide are staring down in the next few weeks. Fremantle, GWS, Melbourne and Geelong in the next month, and they need to go at least 2-2, to keep themselves in the hunt.

A disappointing loss for the Suns. They probably hate hearing about it, but at least people can cling to the fact that they are now completely removed from the easy-beat category they have permanently resided in for a decade. The Adelaide Oval once again proved to be a wasteland of broken dreams for the Gold Coast. One day Suns fans, one day. They now lose a little bit of touch from the top eight with this loss but have a slightly more favourable draw if they win the games that they should. Collingwood await next week, as a must-win clash at Metricon, followed by Richmond. The Suns really need to win one if not both of those games to drag themselves back into contention. This game was a stumbling block but by no means a death knell on their finals aspirations.