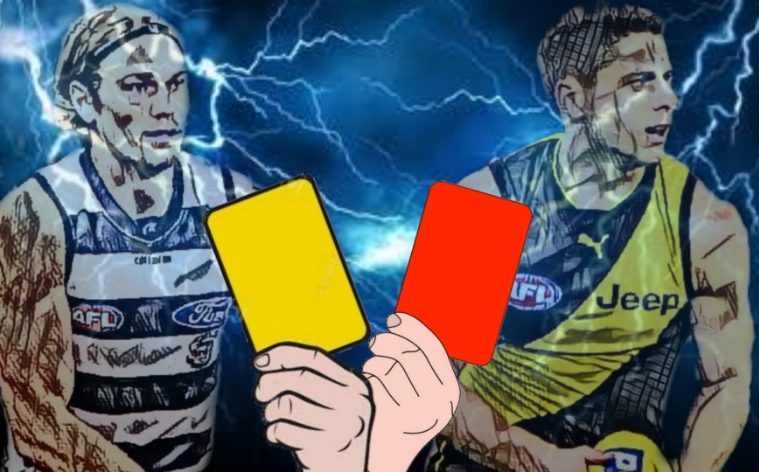 Cards Off The Table

The hit from Tom Stewart on Dion Prestia has once again opened debate as to whether the AFL should introduce a yellow/red card system to immediately penalise players and teams for on-field indiscretions, particularly when the victims of these actions are unable to compete for the remainder of the game.

Contrary to popular belief, people here at The Mongrel Punt don’t always see eye to eye on topics, and this is one that has divided our writers.

As such, it is time to put forth a case for each side. I’ll be taking the con side in this article and Brett Hodgson will follow up in the next little bit with the reasons why there should be a card system in place. He better not cherry pick what I say and use it against me…

… that would be unfair.

So, who is better looking? Tom Holland or Henry Cavill? Spiderman appeals to the younger cohort, but Cavill… he’s The Witcher, and Superman. Plus, he has a bit of size about him. Does he have Holland covered?

So confident am I that I will win this debate that I am willing to spend the first fifty or so words debating which of these two blokes is better looking. And yes, I am happy to steal this opening segment from the nerdy blue-haired lawyer from The Simpsons.

I mean, this card-rule debate is a storm in a teacup, isn’t it? Another knee-jerk reaction from a group of pearl-clutching people who want the AFL to think of the children and fall in line with whatever other sport they follow, sending blokes off the field for an indiscretion.

They see something go wrong – in this case Prestia being cleaned up by Tom Stewart – react like trained seals, and they want it fixed. Immediately… go… fix it! Now!!!

Whilst I felt for Tigers supporters, and understand why they’d throw their support behind a rule that, if applied retrospectively, would remove Geelong’s best player on the ground in a contest they lost, something tells me that if Tom Stewart had played a shocker from that point on, the argument to “send him off” wouldn’t be quite as vocal.

Let’s get a couple of things clear immediately.

If instituted, there is no way in hell the AFL will not cock this system up.

Think about it – when have they NOT cocked things up when it comes to changing rules without doing their due diligence and actually properly trialling it?

Everything they do for the betterment of the game leads to more and more supporter frustration.

They are all at the top of the list for things supporters hate, and they’ve all been instituted quickly and without a lot of thought or study. Actually, no… nobody asked for the stand or dissent rules – no one is that stupid.

But if the league opted to go with this card system, it would be the biggest turn-off in the game since I had my shorts ripped off in a tackle once and “accidentally” exposed myself to supporters. No one wanted to see that, they tell me.

We can all see what is going to happen with the card system. I am sure my counterpart, the Good Mr Hodgson, will argue that it should be reserved only for the most serious of offences. Hell, he might even cite Hall on Staker, or Gaff on Brayshaw as his examples as to when it should be used, but Stewart on Prestia?

Are we going to put that in the same basket?

Though it was worthy of a report and likely a gefty suspension, it was still a football action – a bump in the play. Not a great bump, and yes, it was high, but this wasn’t a punch in the face or the guts. Again, we are falling into the trap of wanting to penalise something because of the outcome – not the act.

It has been the problem with our match review system for years. A bloke breaks another’s jaw – three weeks to the perpetrator. The same bloke who gets hit gets up without injury – the perpetrator gets a fine.

Are we going to have Michael Christian, or a panel of umpires sitting in a box, reviewing the incident and making the assessment on the spot to find whether the incident is worthy of booting the player out of the game? Hell, umpires can’t even get the rules we have now correct. How can they be expected to take on the responsibility of this, too?

The Match Review Officer and the Tribunal screw up the parameters we have in place, already, as well. The MRO gets to sit and review tape for hours to find the right grading and he still doesn’t get things right. Chances are, under a card system where he has to decide the fate quickly, a bloke gets a red card, sits the remainder of the game out and is subsequently cleared of wrongdoing at the tribunal.

You know what that is called?

How do we go if there is a similar action to the Stewart-Prestia incident and this time it’s Callan Ward – old Cement Head – copping the knock. Someone bumps him, he hits the deck… and then he bounces up. I’m not saying Prestia was soft by being knocked out – it can happen to anyone, but some blokes just have a bigger, thicker head. I’ve seen Trent Cotchin bounce up after copping a hard knock, too. Are we going to be quick to call for a red card when that occurs, or only when someone is hurt? Are we going to take a system that’s broken and break it some more because people are upset for a couple of days?

Here’s one for you to mull over – what about the Tom Lynch punch on Sam Collins a couple of years back? A blatant punch was thrown, dropping Collins, and it advantaged the Tigers, as Lynch kicked a goal while Collins was on the deck, unable to breathe. That was a non-football act that would warrant a red card if we were being serious about it. Richmond won and Lynch was pivotal in that game. Where was the outcry for him to be sent off?

Where was Maude Flanders when Lynch hit someone off the ball?

You cannot be hypocrites here, Tiger fans. Eventually, this will swing back and be directed at one of your players. You know that, right?

Guilty until being proven innocent is not ideal, but it seems those calling for the implementationof a card system dont care about that -“Fix it… now!”

Speaking of colours, at the heart of this matter is that our game is full of grey areas. I know some would like to see it in black and white, but the truth is, way too much is left entirely up to interpretation. This would be another grey area. We have free kicks at one end of the ground let go at the other within 15 seconds of each other, and we’re expecting a card system to somehow provide consistency?

As always, if the AFL ever commits to going ahead with bringing the league in line with every other major sporting code in the world where there is physical contact, we’ll screw it right up.

We have this wonderful game where so many things happen on a weekly basis that we simply cannot institute rule after rule to stop all of them. We’re already upset with the system we have that is constantly being tinkered with. How couldn’t bringing in another contentious system not make it worse? We have bozos fixing things until they’re completely broken!

A wise man said to me that fear of what might occur is not a reason to opt out.

To that, I respond that those who refuse to learn from history are doomed to repeat it – a poor track record in introducing rules as a knee-jerk reaction is not reason enough to go ahead.

I don’t care that they employ this system in lower levels of the sport, where blokes run around and thump each other more regularly. If it is required there, it is required because it is not professional, and instances like Barry Hall decking Brent Staker, or Andrew Gaff thumping Andrew Brayshaw happen very, very rarely at the highest level.

Common sense must prevail. Leave the cards to the round ball game… and stop screwing around with ours.