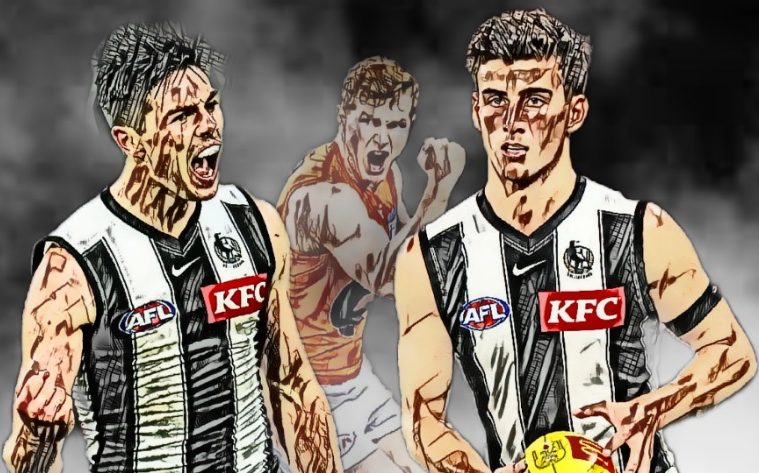 Coming into today, there was some hype to the game. The Pies defeated the Demons in their last game and the Giants narrowly lost a shoot-out with the Dogs. Apparently, the orange tsunami has returned, and the Pies are building under Craig McRae. On a soggy, dour day under the Melbourne sun (yes, it does exist) these two teams met. How did it play out? Here’s what mattered!

Much was made of the contribution Toby Greene made last week for the Giants. He finished with seven goals and kept the Giants in the game. He is one of those players that you hate when your club plays against you, but you’d love in your team. In many respects, he’s the Nick Kyrgios of the AFL – the way he is umpired, the so-called “Toby Tax” when it comes to suspensions, and the fact that he is completely box office when he plays.

Today, however, wasn’t his day. Between Darcy Moore, Brayden Maynard, and Isaac Quaynor they managed to nullify the impact Greene had in this game. Toby had his moments, but the Pies worked together to cover him. Early in the game, it looked like the Pies’ defenders were completely fixated on Greene that they left their direct opponents, allowing Greene to set up the opening goal of the game. From that point on, however, he couldn’t really impact the game the way he wanted.

He had brief glimmers of his brilliance, and both teams were Toby conscious. He kicked a goal late in the last quarter to make things interesting, but, ultimately, the Pies team defence kept him out of the game. He finished with 1.1 from 19 disposals.

This won’t be a pile-on. The media vultures have circled the Pies enough this week and overblown a number of things. But whenever there is significant media attention and pressure, it’s interesting to assess how a team responds. While the Pies were slow out of the blocks, they wrestled back control, and then kept a relatively safe distance for most of the game.

With Jordan de Goey not playing, the attention is turned to serial pest Jack Ginnivan (he’s probably the next in line to taking the ratbag mantle off Toby) and Isaac Quaynor. Both played their roles well and contributed when needed. Ginnivan did all he could to antagonise – even having the GWS defenders lamenting a perceived lack of awareness from the umpire about his innate ability to hold his position and shrug a tackle. I mean, what’s the problem? Players need to tackle him correctly. And Quaynor offered great rebound and won some significant hard balls in the last quarter in teeming rain.

Full marks to those two and to the Pies for being able to silence the outside noise, especially the keyboard warriors, and win the game, cementing themselves in 8th and relegating the Tigers into 9th.

Coming into today’s game, the key stats were basically even across the two teams. The Pies, however… well, they flexed their muscle when it counted. They dominated field position for much of the game with 12 more inside 50’s, even with nine less disposals. They embraced the chaos and rarely allowed the Giants access to the centre corridor. With those 62 inside 50’s, they had 33 scoring shots, while the Giants managed just 17 shots from their 50 entries. Had the Pies kicked straighter than 11.22 this game would not have been anywhere near as close as it was.

The Pies also held stoppage and clearance ascendancy 37-28 (13-10 from centre bounce) which allowed them to hold that field position advantage. Even with these advantages, they embraced the chaos and were happy to run in waves and just keep the ball alive.

GWS were brave and did take the game on. While there has been recent discussion about the resurgence of the orange tsunami, this was rare today on a soggy MCG turf. They were more effective when running at the Pies and not allowing them to setup. When the game was on the line, it was their lack of ability to hit clean targets at half-forward, and so the ball would slingshot back the other way. It was a solid performance from the Giants, without being spectacular. However, whenever you can kick 12.5 in wet conditions, you’ve finished well, even if seven of those goals came in a frenetic last quarter.

Mark McVeigh threw a curveball early by sending Nick Haynes to full forward. Haynes kicked 0.2 in the first quarter, and while he didn’t take his chances in front of goal, he nullified Darcy Moore for much of the game. It wasn’t until the last quarter and Haynes going behind that ball, that Moore started to get some meaningful space and possessions.

Darcy Cameron had a great game in the ruck. He finished with 17 disposals, 23 hit outs and two goals, being the dominant ruckman on the ground and contributing in all facets of the game. With no Preuss or Flynn, the Giants and Lachie Keefe battle manfully in the ruck all day, but he just couldn’t go with Cameron.

With 100 seconds left on the clock yesterday at the MCG, Jack Henry marked and goaled for the Cats … putting them in front with not long to go. With the Giants coming hard in the last quarter, and while they did kick the last four goals of the game, the younger Henry, Ollie, – the second half specialist (16 of his 20 goals have been kicked in the second half) – kicked from almost the same spot to re-establish a big lead for the Pies, finally putting the game out of reach with eight minutes to go.

Sport has a great way of being poetic and this is something that you cannot script but is a great moment for the Henry family.

I saw this because I know I’m going to upset Collingwood supporters. Most people have Nick Daicos as the clear front runner for this year’s Rising Star – this writer doesn’t agree with that. Yes, he has a lot of skill and wins plenty of the footy, but it’s easy to do that from half back when you run around without an opponent and call for the handball every time you’re near someone.

Now, I don’t want this to be a beat up, so, the positives. He makes good decisions, and is clean. I’d love to see him get his hands dirty, use his clean hands in the contest more, rather than just be on the outside. I know that’s probably the coach’s direction, but Fly, please let him dominate on-ball as well. If he can do that, wearing the body contact, and hard checking of midfielders and key position players, I might just change my mind. The future is bright for him, 100%, let’s just temper expectation and look beyond mere disposals.

Many have spoken of the increased impact from Harry Himmelberg since moving to the defensive half. Again today, 11 marks and 30 disposals. He got involved in everything. He competed, won the footy, and distributed it well. This has been a great coaching move from McVeigh and crew, and we are starting to see the potential of Himmelberg be fulfilled … just in a different part of the ground to what may have been expected.

I’m not a huge fan of the Pies – when you live in Victoria and don’t support them, you learn to ‘hate’ them … and it seems the Pies cheer squad have embraced it. I had a good chuckle seeing the sign “Get Over It! Collingwood hates you too!” Great job Pies cheer squad.

Jamie Elliott was superb. He was the reason the Pies got back into the game in the first quarter. He contests everything, and in the wet, his evasiveness and clean hands brought many others into the game. Were it not for his wayward kicking in front of goal (2.3) he’d have been the clear best on today.

Phil Davis was great today. The fact he spent most of the day on Ollie Henry shows how highly regarded the young Pie is. Davis repelled many of the Pies forward thrusts and, while he is slowing down, showed again he is still a more than handy one-on-one defender.

Josh Kelly 26 disposals, 8 tackles, 1.1 was in everything and put his Giants side on his shoulders and almost brought them across the line. He’s putting together a very good season.

The deliberate rushed behind against Darcy Moore was correct. The initial contact was outside of nine metres, and when that happens, it doesn’t matter if there is pressure. He did touch the ball again, but there was no pressure hence why it was paid. It added some spice and intensity to the game, the frustration is understandable, but it was the correct call.

That’s all from the analyst’s corner today. A 10-point win to the Pies, which probably flattered the Giants in the end. The first half was a slog, but the game opened up and came to life in the third and was a great watch in the last. The Pies travel to Metricon next Saturday night to take on the Suns, which will have top 8 ramifications, while the Giants host the Hawks at Sydney Showground Stadium.