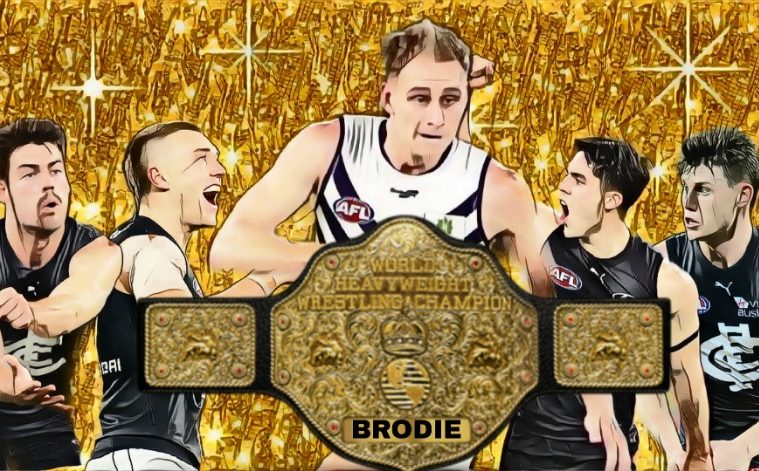 Remember in The Hobbit, when Bilbo Baggins found the one ring?

He was described as the most unlikeliest of creatures. Whilst I am not sure how hairy Will Brodie’s feet are, I am pretty sure that nobody enviioned him capturing the Mongrel Midfield Championship Belt this season.

And yet, here we are!

After dethroning Christian Petracca in Round 11, Brodie has tuned back challenges from the Lions and Hawks, and now enters defence number three. This time, he faces the might of the Blues.

Patrick Cripps, George Hewett, and Sam Walsh line up to have a crack at the champ in Round 15 as the Blues take on the Dockers at Marvel. Can our little Hobbit do it again? Or will the might of the Carlton midfield be too much for him?

The title is on the line – may the best man win.

The individual win has to be comprehensive. If a challenger has 26 touches and a goal and the champ has something similar, we call it a draw and the champ gets the benefit of the doubt to retain the title. You either win decisively, or you don’t win at all.

Note – at the conclusion of the weekly update, a full championship history, spanning from 2017 to the current day is available, including a full history of title reigns and most successful defences, etc… We are now at 8K+ words in this baby, and the history grows every week.

The Mongrel Punt Midfielder Championship Belt is a column for our Mongrel Members.  They also get five other exclusive columns per week as well as access to HB’s game reviews early. Wanna join them and support the best damn independent footy site you’ll find?