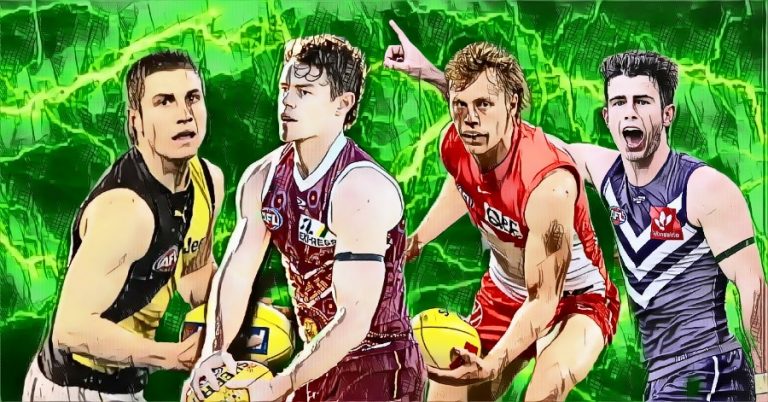 Mongrel of the Year – Round 14 Results and Leaders

The bye rounds are done for the season again, and I’m sure you, like I am breathing a sigh of relief, more games of footy mean there is less time for the media to pontificate and less time for idle players to make bad life choices. Round 14 will be looked back on as a round of upsets, and that’s not just a lazy way for this ‘expert’ to reconcile his two correct tips. Essendon and Port Adelaide both comfortably defeated more fancied opponents, with maligned players for both sides coming to the fore, while Richmond and the Bulldogs outlasted adversaries who looked likely throughout the games.

The top of the leader board remained relatively settled as the Demons, Lions and Dockers enjoyed their annual bye, while Mills and Cripps were unable to find their way into the top 5 players on the ground, despite the Carlton skipper being very good on Thursday night. However, two players forced their way into the top vote getters running tally, and both were in action during the Tigers/Blues blockbuster. In-form Richmond midfielder Liam Baker continued his purple patch, while 2021 sensation Sam Walsh was the Blues best in their narrow loss.

A metaphorical toss of the coin determined the most valuable player in this game, with the silver teetering on its edge before tipping over to announce Dion Prestia as a narrow MOTM over a streaking Liam Baker who has polled 19 votes in the past five games. Not that I want in any way to promote credibility for BTs incoherent rambling, but I quite like the ‘human meatball’ (mostly for the fun visual it elicits), who was a contested beast in this game, securing 19 of his thirty touches in contests, and extracting a whopping 13 clearances. Baker’s poise and clean hands in greasy conditions neatly delivered the ball 75% of the time to the advantage of a teammate, a spectacular result considering his position.

Hard-nosed Mason Redman moved into double figures in Mongrel votes as his equal game-high 31 disposals and 11 marks led the way in a big Bomber upset. Excelling in his primary role as a defender but has also been a prime offensive mover in most of the Bombers’ best performances this year, his run and dare was indicative of a vastly different Essendon on Friday night. Former Giant Dylan Shiel was equally effective, claiming four votes for his 25 touches which included seven clearances and a game-high ten score involvements. Often ridiculed for his flaky disposal, he was on song in impact deep forward entries that brought 2m Peter amongst others into the game.

The reigning Brownlow Medallist reminded everyone of his best in a challenging season personally and for team as the Power and Wines both delivered their best performances of the year. 34 touches, 10 clearances and seven score involvements going head-to-head against a powerful Swans midfield would’ve warmed the cockle region of even the coldest hearts down at Alberton. Two forwards were the next most impactful, Power beanpole Todd Marshall appears to have finally come of age and added a further four goals to his career-high season tally of 27 in his sixth season, at the other end Isaac Heeney singlehandedly tried to keep his side in touch with four goals of his own and three contested marks.

An unexpectedly entertaining game was only decided in the dying minutes despite Geelong never looking in major danger throughout, and one of the key drivers was 2020 All-Australian Cam Guthrie. He was relentless in his pursuit of the Eagles, recording a career-high 13 tackles, his ferocity threatened to boil over as he pulverised Rioli at one point, but he steadied to collect 25 possessions and four clearances. Tall West Coast defender, Tom Barrass was a pillar of strength throughout, and especially after the unfortunate injury to Jeremy McGovern left him outnumbered. 12 intercepts, 10 marks, and eighteen disposals at 90% saw him back to his very best. Geelong small forward Tyson Stengle was the most dangerous forward on the field, kicking 3.2 from his fifteen disposals and directly setting up another goal in what has been a very impressive debut season at Corio.

A rollicking game in front of a disappointing crowd was a throwback to a higher-scoring era as now traditional rivals the Dogs and the Giants put on a show for the ages. Young Dog Cody Weightman slotted five first-half goals before injuring his elbow and couldn’t even make it into the votes such was the standard overall. Who else but the ‘Bad boy of Bankstown’TM would provide the most thrills of all on the way to a dynamic seven-goal haul as part of fourteen score involvements from his 21 touches. Perennial Brownlow fancy and AA contender, Jack Macrae has been surprisingly absent from the Mongrel voting call sheet this year, despite averaging 32 disposals and seven clearances, but his 37-touch game capped off with a goal was enough to see him receive four votes here.

Perhaps an indication of their growing maturity, Matt Rowell’s best afield efforts saw him become the fifth Sun into double figures in the Mongrel award for 2022. A flurry of late goals from Gold Coast overstated the result which was a closer affair for much of the afternoon. Former number 1 draft selection, Rowell is slowly regaining his incredible best and was supreme in the clinches, winning seven clearances, six in the centre, and laying 11 tackles, while one-third of his 19 touches ended up scores as he was offensively impactful as well.  Izak Rankine, another of the five double-digit men was a constant source of productivity, eleven of his 17 disposals score involvements as he registered 3.2 with a further two direct goal assists.