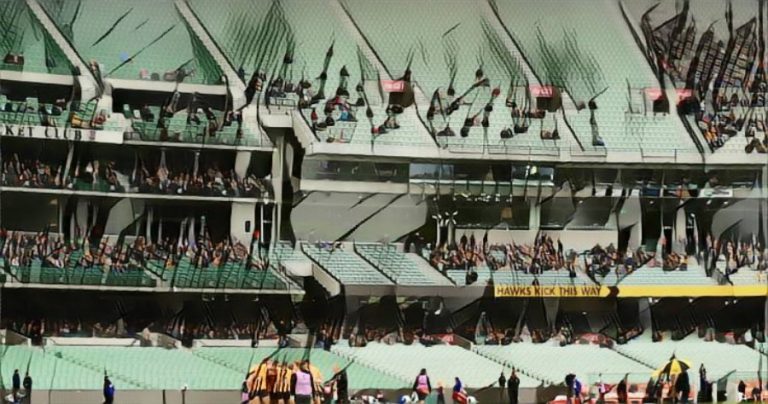 Low Crowd Numbers – It Is NOT Your Fault

For those of us who have had the luxury of working from home since the start of the COVID pandemic, it goes without saying that this has resulted in more than a few benefits to the way we live our Monday to Friday. The pushing back of the snooze button a little while longer. Those couple of hours otherwise spent on public transport commuting to the office better spent elsewhere. Less exposure to the winter weather.

It’s also been quite common to hear business leaders attempt to shame people for this. How dare you not consider the plight of the CBD coffee traders before working in the spare bedroom at home? It’s your fault that the city has become a wasteland devoid of any activity.

Similar arguments appear to be forthcoming from the AFL media of late, as crowds of 13,742 and 21,757 respectively attended the GWS/North Melbourne and Richmond/Port Adelaide fixtures respectively, gaslighting supporters into feeling as though it’s their obligation to rug up on cold wintery days and attend the game in-person, which usually occurs following a transition from a similarly gaslighting narrative around the obligation of owning a club membership as almost all teams record their latest ridiculously inflated record membership number each year.

In plain old English, it’s fucking cold at the moment. You are not obligated to attend the game in person. Especially when the AFL, even with the luxury of a floating fixture, fail to fixture for common sense in this respect? Why couldn’t the Richmond/Port Adelaide clash be moved to Marvel Stadium? Or if the league were that concerned with the appearance of sections of empty seats on the coverage in such a prime timeslot, put the game from Perth or Brisbane in its place with far better weather to accommodate spectators?

It’s also rich of the AFL-approved media to run this narrative, when it’s clear that their preference is for teams to base their income models around the league drip-feeding the broadcast rights revenue to the teams as a control mechanism.

Here’s a snippet of Hawthorn and Essendon’s annual report from 2019 respectively (I’ve deliberately used 2019 here to avoid the perception of inflated numbers due to empty stadiums/interstate venues since COVID and used those two clubs both due to their financial standing and as the only clubs who differentiated membership and ticketed income). 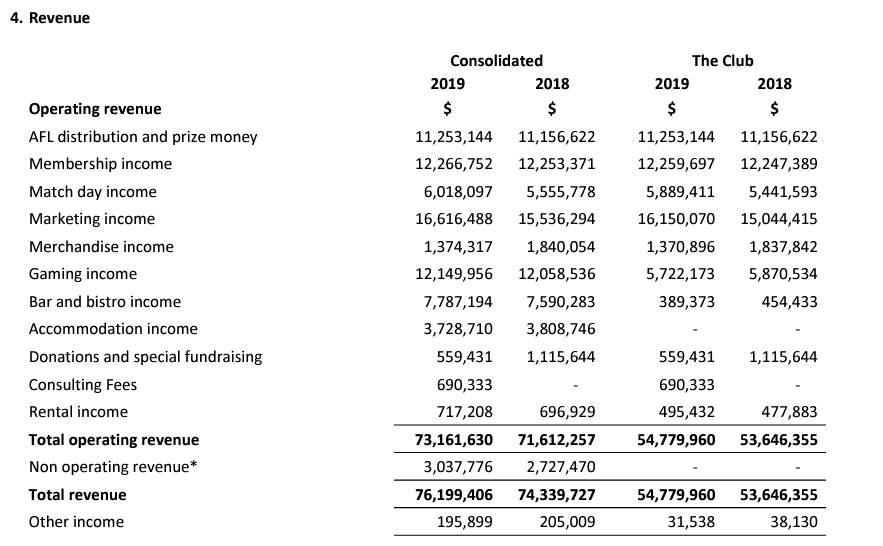 As you can see here – match day income falls well behind the priorities of sponsorship and TV revenue. In fact, it’s starting to be shadowed by alternative revenue streams – such as Essendon’s fitness centre and Hawthorn’s corporate events business. What is also noticeable is, until the community pushback against it in recent years, pokie venues were contributing heavily to the balance sheets.

To the average footy supporter, the 24/7 coverage of the game has never been better, the 4K coverage of games common place, the price of a 4 pack of your favourite brews probably a similar price to begrudging warm mid-strength in a plastic cup. All before braving a public transport system that is the largest spreader of some of the biggest COVID numbers seen to date. To pump up the nobility of sitting in the outer and screaming yourself hoarse is at best a dated pissing contest, at worst, a mischievous argument to squeeze the last few dollars out of near-irrelevant revenue stream.

Using the North Melbourne-GWS Giants clash as an example – the AFL managed to achieve avoiding a new low for a crowd at Docklands (previously 8974 – Melbourne/GWS in 2012). I suspect for the primary purpose of avoiding the comparison to the increase in NRL crowds to a league-high average of 16,906, perhaps also to avoid providing further oxygen to the Tasmania franchise bid. When assessing the numbers for the viability of a Tasmanian team (either a standalone or a relocation), I suspect the crowd numbers aren’t one that is going to figure prominently (especially when you consider the existing Hobart venues and even the proposed harbourside development both have significantly lower capacity than any Melbourne team’s average turnout).

The TV ratings appear an underrated metric that are sparsely analysed by the analysts of the game and the TV industry alike as they are by their US counterparts when analysing the NBA and NFL ratings to justify prime time slots and expansions in markets that rate favourably. Whilst plenty of chest-beating occurs around the opening round prime time slots and their comprehensively higher numbers in comparison to rival codes, and of course, the Grand Final numbers always are bigger and better each year, but rarely is there much looked at the graveyard shift games mid-year for a revenue stream that essentially props up the league singlehandedly at the moment.

Hawthorn and Essendon have shown the way of the future for your club’s survival.

It’s not braving the elements and buying a hot dog. It’s demanding your club be able to think laterally and find alternative income sources and ensure your team rate favourably in the prime-time slots when they get them. The difference between the haves and have-nots in this regard is becoming starker, and only increases the loanshark-like stranglehold that the AFL have on it’s clubs and their boardrooms.