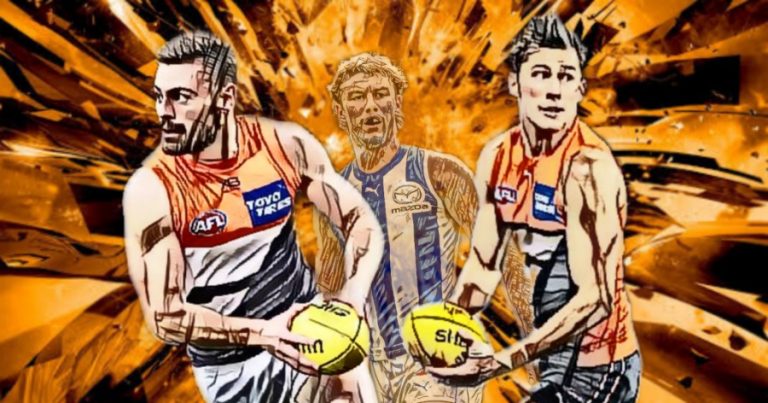 Settle in, folks, for what could only be considered game of round, nay year, nay century.

I’ll cut the hyperbole. I don’t believe there’s much that could be said about the build-up for this game that would be both positive and honest. In the blue corner, we have the Kangaroos, a team full of players who treat the football with about the same amount of passion as a toddler does a vegetable. In the orange corner, we have GWS who, despite having a bad year, have shown some improvement in the last fortnight and will be hoping that a comfortable win can put them back into some kind of groove.

Here are the talking points:

The first five minutes of this game pretty much set the scene for the rest of it. The Roos won the first clearance thanks to a free kick from a solid tackle, and went inside 50. They pressured well, and almost forced a turnover when GWS got the ball out.

The key word there being almost.

A fumble on the wing allowed GWS to effortlessly go inside 50 and an easy goal to Toby Greene resulted. The Roos won the next clearance and went found a behind, but the GWS transitioned forward with precision and ease. The Roos backline forced a turnover with some good pressure but coughed it up off half-back and GWS had goal number two. The Kangaroos had entered the ring, but they had left their gloves at home.

FORWARD PRESSURE
The pressure of the Giants’ forward line was exceptional and their defensive structures just did not allow any easy ball movement from North. GWS aren’t renowned for their pressure, but the lift in it shows perhaps the emergence of what their future will look like.

The Roos matched the pressure of the Giants early but dropped off fractionally with every goal against. I wonder whether fitness or heart is the issue, but by the time they were four goals down – only 20 minutes into the first quarter, GWS were doing as they pleased. So I suspect the latter is to blame.

It didn’t always work, but the plan was clear for the Giants: Go quick and go central. Whenever they got the ball on the wing their first thought was to look inward, and would go there whenever they sensed a hole in North’s defensive structure. It’s the kind of high-risk/high reward footy that I love to see and although North were able to cut-off the inboard kick on occasions, they were rarely able to capitalise as GWS were ready to pounce and with pressure. Better teams will offer fewer chances for the Giants to take that risky shot and will hurt them on the turnover more regularly, but if they carry on like that, they’ll become a vastly more competitive team much sooner than they looked like they were going to a month ago.

A Frankensteinian mash-up of McGovern’s arms and Rich’s legs is Himmelberg the defender. And he was key to many of GWS’ counter-attacks.` Settled down back, Himmelberg was able to cut off attack and attack by the Roos and then launch his side forward quickly and effectively, using his long kicking to great effect. He racked up 37 touches and 16 marks, almost breaking his disposal PB of 23 by halftime. There may have been some question marks about moving their leading goal kicker to defence, but with almost 700 metres gained, he put those questions were definitely answered today.

I’ve often looked at ruckman winning too many hit-outs as somewhat disadvantageous. Sure, a good tap ruckman can win you a game but when they’re winning too many hitouts, stoppages become too predictable and that was proven again this game. Goldstein and Xerri dominated Flynn in the ruck, but it was GWS with all the clearances from stoppages. Not necessarily in huge numbers (in fact North had more centre clearances)- but with the cleanliness of their wins. When north won a clearance they were generally rushed and with hack kicks out to nowhere in particular. When GWS won a clearance, there was more space and organisation, and they could set themselves up from a clearance well.

GWS wanted the ball and they got the ball. They dominated all the possession stats by working harder at the contest and by running harder, faster and for longer. Every forward movement from the Giants was on the back of overlap run, and defensively they would get numbers to the contest. Conversely, North were nowhere to be found. Their movement was stagnant, they couldn’t win a contested ball, and they couldn’t hit a target by foot. North were against the ropes early and I was trying to see where a counter-punch would come from, but when Riccardi sunk the Giants’ 7th goal in early in the second and the Roos were still looking for their first, I was wondering whether the towel was a safer option

Coniglio has become a little maligned in recent years at the Giants. Since signing a mammoth 7-year contract, he’s copped a bit of criticism for not impacting games the way he used to. If things turned the corner early this season, they were going back in the direction he meant to go in the first place at the conclusion of this game, with Conigs being front and centre of every contest. The quick stats read 34 touches and 3.2 on the scoreboard, but even that doesn’t quite justify the mammoth effort he put in. I haven’t seen a game this complete from Coniglio in quite some time, and although it could be argued he was playing against witches hatches, I’m more inclined to believe some shackles have been released under his new coach.

Harry Perryman was sent to hospital for a check-up after a massive hit early in the game, so fingers are crossed he’s ok. It was a bone-crunching hip and shoulder – completely legal, and despite the Perryman injury, it was refreshing to see the umps put the whistle away for a good, hard contest.

Josh Kelly was hit off the ball by Horne-Francis in the third quarter. The number one pick, frustrated after just his second kick for the game was turned over, gave Kelly a very late roundhouse whack which will definitely be looked at by the MRP. Fortunately for Kelly, and perhaps JHF, he was unharmed by the incident and played out the game.

Speaking of Horne–Francis. I don’t like bagging players in their first year, even if they’re the number 1 pick. Footy takes a while to learn and players need to develop, but I did not see anything from him today that inspires confidence. He’s either not as good as they thought he might be or he’s got one foot out the door. I suspect it’s the second.

Noble throwing one of his better midfielders to full-forward and leaving him there when his team isn’t winning the ball is a very bold strategy, Cotton, and it definitely did not work. Stephenson started in the square and he must never have left it because I completely forgot he was playing until I looked at the stats at the end of the game.

I’m not AFL coach but I’d have probably told him to run next to Tom Green or Coniglio. Not in a tagging role but just to have one of his players somewhere near the football. His first kick came 11 minutes into the last quarter and he’s playing like a man who just doesn’t want to be there.

North stole Greenwood out from under the nose of the Suns last year and I’m beginning to question the logic of it. Greenwood may have come to Arden Street but he left his footballing ability on the Gold Coast. I don’t know if he’s being played out of position, spending too much time on the bench (he played about half this game) or has just regretted his move south but if I’m North, I’m asking for a refund after today’s performance.

Was the crowd number and, if I’m going to be honest, it’s about 13,000 more than I expected. North are a small club that probably have as many members in Perth than they do in Melbourne (for some reason). GWS is a much smaller club. Neither are going to bring a big crowd even when they’re playing well, and North are definitely not playing well. Perhaps they should put up some temporary stands and start playing at Arden Street: they’d probably get a similar number but at least they’d be playing in front of a full house and they might even recapture some identity.

Commentators often refer to North’s ‘shinboner spirit’ thing and I’m not going to lie, I was a kid when they were winning grand finals so I don’t really know what it really means. When I think of shin bones, I think of kicking coffee tables in the dark which can’t be conducive to winning football games. I get the sense this young North side has no ideas what it means either, but watching them play at the moment comes with about the same level of pain of hitting your shin bone in the dark

Well I dunno about you, but this game went roughly as I expected it to. The Kangaroos are still suffering from some type of leather allergy and packed it in for the year. It’s onward and upward for GWS who, while they are still a long way off and probably took their foot off the pedal a bit in the second half, impressed me with their defensive ethic and desire to play a risky, attacking and attractive style of footy. It was a 49-point win to the Giants and North are feeling fortunate their junk time goals were enough to keep them off the bottom of the ladder.