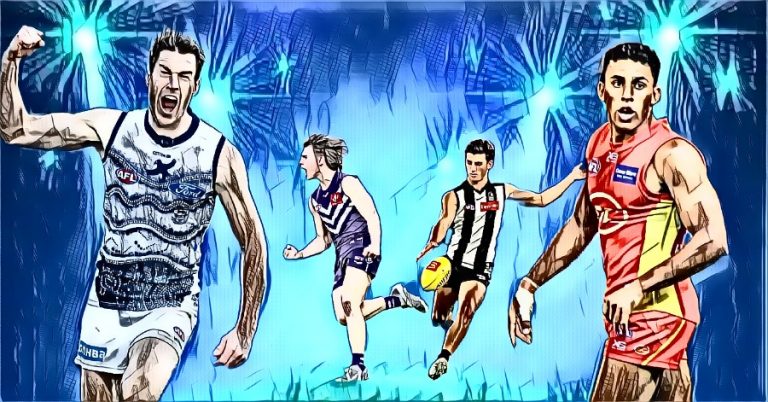 Mongrel of the Year – Round 12 Update and Leaders

Round 12 saw the first of the three rolling ‘bye’ rounds the AFL employ on an annual basis to appease the AFLPA. If that toothless organisation spent a bit more time reviewing ground conditions and educating its players around good choices we might have more players available for selection this weekend, but I digress. While the very top of the leader board was unchanged with Carlton’s bye, and the omnipresent Demon midfield duo along with Brownlow fancy Neale well held, it allowed Callum Mills to move to within one of the lead in outright second. Elsewhere Ben Keays forced his way back in to the top 4 with another solid outing, while Freo’s new midfield leaders Brayshaw and Brodie joined Magpie Jack Crisp in equal fifth.

The extended leader board this week saw a big move from Cat, Coleman Medal leader Jeremy Cameron who jumped up to 19 with another best afield rating, his second of the year from five voting games, and Lion livewire Zac Bailey who’s four-goal performance and Tex Walker’s powerful 3-goal return moved them both to 16.

The star Cats forward duo are averaging 6 goals per game between them this season, and that’s exactly what Cameron delivered alone on Friday night as he swept to the top of the Coleman leader board. A difficult match up when in full flight, as he has the speed and endurance to zip up and down the ground, finding space on the race back inside 50, but equally as potent on the lead out from the square, he mystified the Dogs all night collecting 18 touches, seven marks and an astonishing 11 score involvements. Could be an absolute handful if healthy in September. Cats #30 Tom Atkins has probably been unlucky not to feature in the votes the past few weeks, particularly on the back of his fearsome attack on the ball that netted him 17 tackles against the Crows last week but is rewarded with four votes here for an outstanding performance. His twenty hard-won disposals, eight intercept, seven score involvement and four tackle game would have won plenty of admirers outside the coaches’ box where he’s already a firm favourite. Rhys Stanley, in-doubt before game-time was clearly the best ruck on the field, nullifying in form English and providing plenty of drive with his 15 contested possessions.

Consistent Crow, Rory Laird was in everything as he racked up a spectacular stat sheet collecting 33 disposals, nine tackles, eight clearances, and drove the ball I50 on six occasions to be the major contributor for a Crows team finally back on the winners list, albeit against the hapless Eagles.  The next two placings went to key forwards, Taylor Walker and Jack Darling who produced similar output, sharing eight contested marks in a game where only 18 were taken, kicking three and two goals respectively, each with a pair of valuable goal assists and contributing the first and third leading score involvements on the ground to outline their impact. Interestingly both players are the subject of scuttlebutt about their futures after equally tumultuous but varied off-season issues. It’s great to see them playing good football though as each are sensational in full flight.

The milestone man, Touk Miller polled a perfect five in a game that resembled so many from his elite 2021, he has now quietly moved onto 17 overall to lead the charge or his surging Suns. His game leading 32 disposals (22 contested), 13 clearances, 799m gained and eight I50s turned around a 17-point quarter time deficit to deliver a mature response from the Suns who are guardedly dreaming finals. 24-gamer Connor Budarick returned career-highs with possessions (25) and R50 (6) as he proved impenetrable across the defensive line collecting 15 intercepts.  Prime mover Lachie Weller, on his way to the fabled kilometre in metres gained was scythed down, not by a reckless opponent but by moving turf unseen at professional level since the dark days of Colonial Stadium in the early 2000s. The game of AFL is richer for matches being played in Darwin, but we cannot sent our most valuable assets into an unsafe work environment, and unfortunately these are the last votes Weller will expect for over 12 months.

The Demons premiership skipper played with the freedom of a man unknowing of the firestorm the next few days would bring as he almost single-handedly held off a determined Swans in a showcase match at the MCG. In what was potentially a major final preview, Gawn was everywhere, gained possession at will, twenty-three contested from a total of 28, took six contested marks, 11 of his thirty hot outs going to advantage and to cap off his big night, hitting the scoreboard with 3.1.  Often the scapegoat, Sam Reid turned in a vintage performance, plucking four contested marks as he also kicked three goals, his ten tackles including an unbelievable five I50 absolutely set the tone for the Swans who eventually outlasted the reigning champs. Another Swan mildly under the pump, despite his standing at that proud club, Jake Lloyd stood tall under fierce pressure, best exemplified by the stirring contested mark he took to deny the Demons a shot on goal in the last term.

The game is certainly in good hands if we consider that three of the five players awarded votes in this thriller are all eligible for this seasons Ron Evans Rising Star Medal. Nick Daicos was superb from start to finish topping the possession count with 35 as his precise skills in gusty conditions of the first half were only exceeded by his clean touch through a second half downpour. Equally Hawk master Sicily with 11 clearances, Daicos gained a match high 789m as his team dominated early, before a rousing comeback on a sodden MCG resulted in back-to-back four-point wins. Darcy Cameron played a very Brodie Grundy styled game in compiling a career-high 26 touches, to go along with six clearance, nine marks and a goal in the first quarter, while he was ultimately overrun in the knock-outs by returning Hawk beanpole his influence around the ground as a genuine extra midfielder gave the Pies the ascendancy. The nearest competitor to Daicos claiming the aforementioned trophy for best rookie, Jai Newcombe was perhaps an accurate snap on goal in the pulsating last term away from maximum votes in this one. Almost single-handedly changing the momentum of the game in the second quarter, Newcombe hunted the ball like a tiger, brutalising more mature and experienced bodies as he excelled the worse the conditions got, game highs in tackles and clearances again proved his credentials as the Hawks most important mid.

Fremantle’s Caleb Serong most likely suffers the common affliction of many star WA players, too far from the bright glare of South-East Australia centric media, but make no mistake, he is a jet. Going head-to-head with perhaps the best foursome since the Beatles (apologies to WCE circa 2005 – I’m Melbourne based of course), Serong led his team with style and grunt amassing 31 touches, six clearances and seven tackles, as he continually won possession against his highly rated opponents. Fleet of foot Lion is doing a certain disrespect to just how fast and nimble Zac Bailey is, and thus he turned a mediocre half time contribution into almost a best afield performance in the literal wink of an eye. Progressing from next big thing last year, to a firm fancy for an All-Australian blazer, Bailey lit up the Optus turf with his evasiveness and deadly accuracy scoring four goals straight and setting up another as an outclassed Brisbane stayed in touch on the back of his brilliance. Out of contract Docker key back turned forward Griffin Logue did his chances of an extension or godfather acquisition offer no harm with another selfless performance in a bullocking role, kicking two goals himself and grabbing three big contested marks in the process.