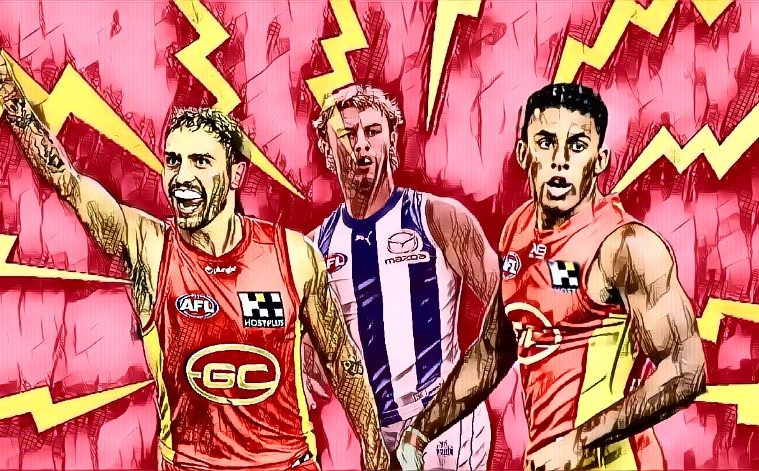 For the second week in a row, Darwin was transformed into a Gold Coast fortress. After taking care of business in a big way against Hawthorn, this time it was North Melbourne’s turn to face a Suns outfit that grows in confidence with every forward step. Unlike their ladder position, North started well, taking it right up to their more fancied opponents, and entered quarter time with a handy break. However, as all good teams do, Gold Coast came back hard, eventually putting the young Kangaroos to the sword with a commanding 62-point victory.

Here are my likes and dislikes from Gold Coast’s momentum-building victory.

Here is a man that everyone can hitch their wagon to. When Touk Miller was elevated to co-captaincy alongside Jarrod Witts, many wondered if his brilliance on the field would be negatively impacted by the responsibility of leadership. If anything, the opposite has happened, and Miller is even more of a follow me type of player than he was before. Leading from the front, as he so often does, Miller drove his team forward with a best afield display. Miller amassed 32 disposals, 22 contested possessions, 20 pressure acts, 13 clearances, eight tackles, eight inside 50s, six score involvements and 799 metres gained.

How much better do the Suns look when Connor Budarick is in the 22? Missing most of last season with an ACL injury, Budarick has hit the ground running this season, and their defensive balance looks so good when he’s there. Collins is the main stopper, Ballard the interceptor, and Budarick is the rebounder. Looking so assured with ball in hand, Budarick was one of his team’s best players, with 25 disposals, nine contested possessions, six defensive rebounds and 442 metres gained.

Moving Oleg Markov to defensive 50 was a key reason in Gold Coast’s second-quarter charge, with Markov controlling proceedings with beauty by foot. Now that Lachie Weller is likely out for the season, Markov has a permanent place across half-back, and he shapes as an important component to Gold Coast’s game plan going forward. Markov’s numbers today reflect his influence, with 565 metres gained from 19 disposals, seven inside 50’s, seven score involvements and six marks.

With any team in the midst of such a massive rebuild, such as the one North are undertaking, you need to find positives to cling to, something that gives supporters hope that their club is on the right track. One positive from this game was North’s start to the game, which was as unexpected as it was brilliant. Playing with vigour and enthusiasm, and a determination to take it up to their more fancied opponents, North looked a lot better than in previous weeks, restricting the Suns to just one goal, while kicking four of their own to take a 17-point lead into the quarter time break.

Speaking of finding positives, I’ve been very impressed with the work of Luke Davies-Uniacke this season. It looks as though LDU has finally developed into the consistent big-bodied midfielder the Roos have been crying out for, and the sheer numbers back that up. LDU was undoubtedly North’s best player today, with 25 disposals, 13 contested possessions, six inside 50s, six marks, five clearances, and 554 metres gained.

Without key forwards Ben King and Levi Casboult, there was slight concern about where Gold Coast’s score would come from. Yes, Sam Day was back to give Mabior Chol a chop out, but the number one key defender would undoubtedly go to Chol, something he hasn’t had to deal with very often. With Chol under duress, the team responded, and kicked 15 goals from 13 individuals. It speaks volumes of the development of the Suns that their weakness in the forward line was offset by the entire team rolling up its sleeves to get the job done regardless.

In Izak Rankine, Joel Jeffrey, Ben Ainsworth and Malcolm Rosas, Gold Coast possess enough small forward weapons to trouble even the best defences. Each brings their own unique skillset that compliments each other superbly. The penny has finally dropped for Rankine, who combines flashy brilliance with forward pressure. Jeffery is the high flyer with a highlight reel Eddie Betts would envy. Ainsworth is the tough nut that provides many an assist to his teammates, and Rosas drifts up the ground to bring it all together. With Chol, and eventually King, the Suns forward set-up has a devastating upside, and will wreak havoc for years to come.

With 30 minutes played, North had set themselves for a major upset. Trailing by 17 points, the Suns looked flat, listless, and needed a spark to get themselves back into the contest. In taking the game back in the second quarter, the Suns proved that this is more than a fleeting resurgence. Kicking 7.7, and keeping North scoreless, Gold Coast went from 17 points down, to a commanding 32 points ahead. Good teams find a way to get the game back on their terms when all seems lost, and for the first time, we need to start looking at the Suns as a good team, and everyone involved should be proud of their efforts to get the Suns to this position.

It was the switch that changed the entire trading landscape. Finally, someone had requested a trade to the Suns, and Gold Coast became desperate to get someone, anyone, over the line. With Lachie Weller on his way to Queensland, Fremantle knew that Gold Coast’s desperation would deliver them a haul coming the other way. Gold Coast sent pick 2, in exchange for Weller and pick 41. You might be wondering why I love what on the surface appears to be a lopsided trade. Yes, comparing the player Fremantle selected, Andrew Brayshaw, with the player they lost, seems silly. But package Weller with the player taken at 41, Charlie Ballard, and suddenly the trade looks a lot more even. Weller has been very good, but Ballard has a very bright future as a key member of the Suns’ defence. Leading the league for intercepts, Ballard has more than surpassed the perception of the ‘steak knives’ of the trade, and Weller is holding up his end of the bargain as well.

Speaking of Weller, he was beautifully magnificent today. Until his heartbreaking injury, Weller was a run and carry machine, and his smoothness was matched by a ruthless efficiency. Weller ended his evening (and perhaps his season) with 21 disposals, at 90% efficiency, seven inside 50s, six defensive rebounds, five one-percenters, five marks, and a staggering 802 metres gained. The Suns will miss his running power greatly, and no doubt they will be praying hard that his knee injury isn’t as devastating as we all fear.

But as much as Lachie Weller brought so much love, his knee injury in the last quarter was absolutely shattering. Seeing Weller crumpled on the broken turf, slapping the ground in frustration was devastating, as he knew what everyone watching knew. The Suns are marching towards their maiden finals appearance, and Weller knows that if they make it, he won’t be there to experience that euphoria.

The perfectly curated Adelaide Oval, this wasn’t. I haven’t seen a surface get cut up this much in a long time. So many players lost their footing, and late in the last term, the poor surface claimed the knee of Lachie Weller. Now, to be fair to the grounds staff, the weather likely played a part in the roughness of the surface, but for a ground that doesn’t see too much football, it is a blight on the competition that matches are played for premiership points on a surface that looks at home in suburban Melbourne in the 1980s.

DAVID NOBLE’S USE OF JASON HORNE-FRANCIS

Jason Horne-Francis is North Melbourne’s most prized diamond. He has toughness for days, an innate ability to find the football and is a good driver in heavy traffic. Why then, did David Noble start Horne-Francis at half forward? At quarter time, Horne-Francis had only touched the ball three times, once on each wing, and a sharking goal from a stoppage. If that wasn’t bad enough, Horne-Francis, and other bull Tarryn Thomas, started the second half on the interchange bench, at the precise time that North needed a spark to get themselves back into the contest. It beggars belief that Noble continued to use Horne-Francis so poorly, and provides more evidence as to why Horne-Francis seems so disgruntled.

We don’t like to put the boots into the people in charge of the match, their jobs are made hard enough by the administration. And to be fair to Eleni Glouftsis, she did quite a good job today. But we can’t ignore the fact that her voice is just far too quiet. I don’t want to suggest that it is merely due to her gender, but there were too many times that Eleni called a free kick, and I couldn’t hear the explanation. I don’t know what the solution is, whether it’s as simple as turning her mic up, but when she inevitably umpires a match in front of 75,000 fans, simply being heard, even by the players, is something that might prove too difficult.

It would be interesting to hear Nick Larkey’s take on this, as he looked as though he could not hear or understand what he was being told when standing on the mark at one stage. He seemed to think he was being told to move back. When he did, he was penalised 50 metres for not adhering to the ‘stand’ rule.

This is more of a personal bug bear than anything else. But seriously, if you can get two fists to the ball, you can extend your fingers and mark it. Instead of punching the ball away where it could conceivably land anywhere, you can take the mark and control where it goes next. It’s not that hard, and it grinds my gears every time it happens.

It was a game that started so well for the Roos, but it ended in the same depressing fashion for the Shinboners. Credit to North, their start was fantastic, and 30 minutes in, you felt that an upset could be on the cards. But this is ground zero, and consistency, even within matches, is something that still eludes the Roos. Taking the first quarter in isolation, you can see that David Noble has something to work with, but anything resembling excellence is still a long way off.

But for the Suns, this was another step forward in what is quickly becoming their coming out party. Without two of their biggest target up forward, Gold Coast rolled up its sleeves and put together a team-first effort. They weathered the pressure storm, and roared over the top of their opponents, which is ultimately what good teams do. They enter the bye with a 6-6 record, and only percentage is keeping them outside the top eight. This is the best I’ve ever seen the Suns, and I can’t wait to see how far they can ride this wave.