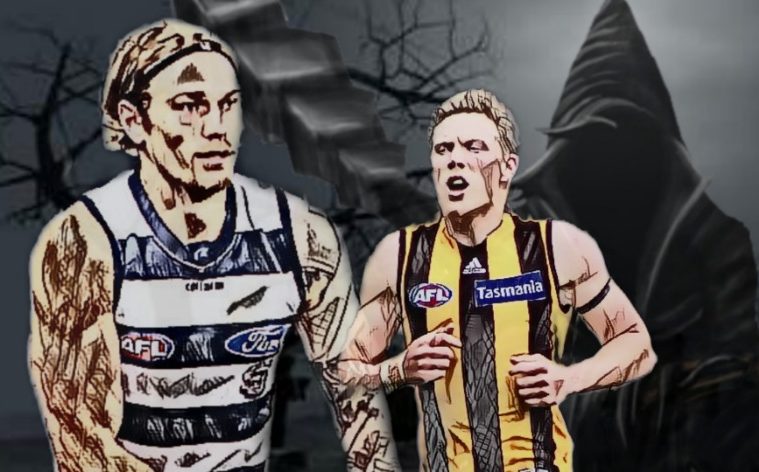 In The Shadow Of Greatness

It’s kind of difficult to believe that a talent like Tom Stewart almost fell through the cracks when it comes to AFL footy.

A late bloomer, his story is now well known, but with a number of All-Australian years under his belt already, this season he seems to be exceeding even the loftiest expectations. And in the process, he could be about to dash the hopes of someone else having a career-best year.

As we head into the bye rounds, Tom Stewart is going from strength to strength. Whilst I am sure a few Geelong fans can point to other outings where he dominated proceedings, I am not sure you’re going to find a better statistical output from him than we saw in Round 11.

Stewart covered all bases, notching 40 disposals for the second time in his career. Amongst that plethora of possessions were 17 intercepts – an equal league-high for the season, ten rebound fifty disposals, and the casual nine one-percenters, as well.

Only three men in history have ever collected double figures in each of those categories in a game – Stewart was one spoil away from making it four. He broke records in our Defensive Player of the Year rankings and now holds the top two scores registered since we commenced the award, and is averaging career-high numbers in disposals (+3.5 on 2021), one-percenters (+0.5 on his 2017 debut season), and intercepts (+1.8 on his outstanding 2021 year).

With All-Australian selections in three of the past four seasons, Stewart looks like a lock to make it four from five in 2022 as he does as he likes as part of the excellent Cats defence. That would place him in the same bracket as Jeremy McGovern – renowned as one of the best defenders the modern game has seen, and would also elevate him to sit just one selection behind Alex Rance, who went close to perfecting the zone-off intercept role last decade.

But with Stewart dominating off a half-back flank, where does this leave James Sicily?

As many of you know, I am a Hawthorn fan. Fewer may be aware that I have a love/hate relationship with Sicily that goes back quite a few years. He is a brilliant player, but ill discipline and a hot temper have cost both him and his team on multiple occasions. I’ve watched his work in defence stifle an opposition, only to see a thoughtless act undo all his good work moments later. You got the good with the bad, with Sic.

Until now, it seems.

After over a year on the sidelines recovering from his ACL injury, Sicily returned to the fray this season like a man possessed – maybe possessed by Ross Glendinning, or Paul Roos, the way he is going about his footy.

Maybe there is something to spending a year on the sidelines that flicks a switch in the mind of the super-talented players? Is it a wake-up call to remind them that this life and this career don’t last? Is it a tap on the shoulder to let them know things could end in a heartbeat? Regardless, the talk of a more mature and dedicated Sicily is proving to be more than just enthusiastic off-season optimism from the club.

But is all the optimism in the world enough to force his way into the All-Australian team for the first time? Recent history is not kind to players on poorly-performing teams.

In 2021, the back six in the AA team all hailed from teams who played finals. Jake Lever and Steven May from the Dees, old mate Tom Stewart from the Cats, Daniel Rich from the Lions, Aliir Aliir from the Power, and Bailey Dale from the Dogs. The top five teams, to be exact.

In 2020, it was a little more varied. Again, mostly comprised of players competing in finals, but Nick Haynes and Luke Ryan managed to muscle their way in despite playing on teams that finished 10th and 12th, respectively.

2019 returns us to the finals-players in the roles, with Hurn and McGovern combining with Grimes and Houli to take up two-thirds of the back six.

So, getting out my trusty calculator… 16 of the past 18 AA selections in defence have hailed from finals teams. That makes it just an 11% chance of making it if you’re sitting outside the top eight.

This does not bode well for Sicily.

And Hawthorn will undoubtedly sit outside the top eight when the final siren on the home and away season sounds. They have been better this year – very competitive – but would want to hope that they don’t fall below 13th. The last player to make the AA defensive squad from a team sitting at that position or lower was Sam Docherty in 2017. That equates to a 3.33% chance of making it over the last five seasons.

Stewart, however, seems to be right in the ideal spot to secure his fourth All-Australian blazer. If I’m being completely honest, he is the player I kind of hoped Sicily would be for the Hawks. Not that I am disappointed with what Sicily is now – I just believe that Stewart reached that level and found the required maturity long before Sicily got to the point we now find him at.

Stewart is just about the perfect half-back flank, and as Sicily played at a high level throughout 2018/19, it just seemed as though Stewart was a level above. Anything Sic could do, Stewart was seemingly doing it better. The Hawks star made one AA squad, and watched on as Stewart collected AA blazers in 2018, 2019, and again last year with Sicily on the sidelines.

If there is one thing that keeps Sicily in the hunt this season, it is that the big boys are dropping like flies – at least the ones people had in contention for the key position slots. Steven May was subbed out in the first ten minutes last weekend with concussion, immediately ruling him out of this week. That’s immediately two games where his influence is void. Jacob Weitering has injured his shoulder and will sit out for over a month. Jeremy McGovern started like a train, but has since been derailed as well.

It leaves the key defensive positions a little vulnerable.

And it just so happens that James Sicily is playing like a true key defender this season. His 7.1 one-percenters have him at 16th in the league, but when you combine that with his 8.6 intercepts, you start to see a picture of a man not only killing contests, but winning them, as well. Not quite Alex Rance-like levels in terms of stats (his 9+ numbers in each of one-percenters and intercepts in consecutive seasons is ridiculous), he is doing what few can.

Other players in a similar boat include Sam Taylor from GWS (third in one-percenters with 9.64 per game, and second in intercepts with 9.36 per game – see above regarding Rance and his ridiculous numbers – Taylor is doing it now!). If he were playing in a big side, arguments would be made that he is the best pure defender in the game.

Harris Andrews continues to toil away despite looking a little more vulnerable than in seasons past. He is averaging 7.9 one percenters and 6.8 intercepts in a year that you would consider below expectations (for him… and above expectations for just about everyone else). He also sits as the number one defender on a contending team. That counts, like it or not.

The other contenders for an AA defensive role offer something different.

In our own Rolling All-Australian team, courtesy of the hard-working Matt Oman, Sicily holds down a back pocket role, with May and Weitering the key defenders. It seems as though fate may be stepping in for Sicily, with Weitering’s absence the likely door that will open up for him.

Will the All-Australian selectors step outside their finals-bound player rationale to hand Sicily his first AA blazer this season? Or will they search for the best defenders on the best teams, perhaps rewarding some of the diligent Freo, Geelong, Sydney and Melbourne backmen?

As it stands right now, my own back six (taking recent injuries into account, is as follows)

Maybe Sicily can unseat the Rance-like Taylor from his CHB spot, given Taylor’s position on a poor team? Sic has made the transition from flanker to key position defender this season. He is responsible for a tall every week and he is still producing floating defender numbers.

Being considered a true centre half back is the key to Sicily unlocking his first AA selection, but I am not sure that perception is widely shared at the moment. If he is viewed as a flanker by the selectors (some who have been on record as stating they do not watch every game), he may end up being a victim of his team’s lack of success.

And if that happens, he will always be viewed as the second-best flanker in the league, at best.

The number one spot is reserved for soon-to-be four-time All-Australian, Tom Stewart.