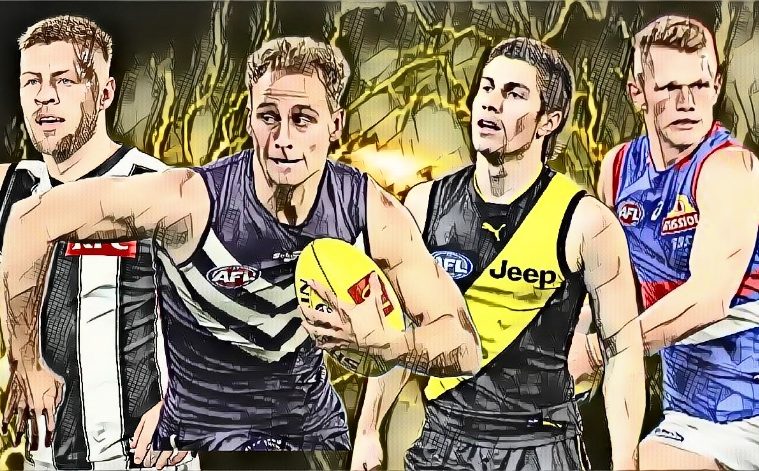 Mongrel of the Year – The Halfway Point

Round 11 saw some pulsating contests, with Sydney vs Richmond and Collingwood vs Carlton putting forward their worthy nominations to be considered games of the season, while Fremantle’s stunning third quarter burst may have just flipped the script on what had seemed a foregone conclusion with a rampant Demons perhaps fallible after all. Again, we saw some incredible individual performances, and while there wasn’t too much movement at the very peak of the leader board, apart from 2020 Brownlow Medallist sidling up alongside Blues skipper Patrick Cripps in equal top position, there was plenty of movement in the top ten.

Cat superstar Tom Stewart, robust Docker Will Brodie and Collingwood ironman all moved north on the table after typically excellent games across the weekend. Early season front runner Ben Keays redressed four weeks without acknowledgement to capture a single vote and maintain pace with the top 5.

It’s often quoted that players need 50+ matches before they feel comfortable at AFL level, and 24-year old Liam Baker is showing that statement to be consistent in his case with back-to-back Mongrel best afield performances. Due to unexpected absences from the Tigers’ primary on-ball brigade, Hardwick has had to accelerate succession plans, and Baker has benefited with the move farther afield, his 22 possessions at just a tick under 80% efficiency were collected and executed with his customary smoothness. With calls by some fans for the Swans to move away from the Lance Franklin era as they stuttered to a 25-point deficit at halftime and a seemingly overreliance on the 1,000-goal legend once the ball entered the forward 50, in the blink of the eye the big #23 turned back time better than anyone since Cher and her elaborate ribbon bodysuit and battleship prop.  Four-second half goals, including a perfect three from three touches in the last to drag his team over the line saw those earlier proclamations quickly deleted.

A player intrinsically linked to Hugh McCluggage, due to their childhood friendship and near-identical drafting has lived in his shadows for much of their career to date, however, with the star #6 missing a few weeks with a hamstring strain, Berry took the opportunity to fill the void, with stunning effect. Registering career-highs in total disposals (33), marks (10) and I50 (8), Berry also impacted with an equal game-high ten score involvements along with hitting the scoreboard himself to the tune of 1.2. It took a pretty special outing by the Lions winger/mid to keep a white-hot Lachie Neale off the top of the podium, another masterpiece consisting of 39 touches, nine clearances and six tackles saw him rocket to favouritism in the Brownlow Medal. It was also pleasing to see former #1 draft pick Cam Rayner bob up with three votes after making a strong return from his ACL-enforced absence last season, spending more time further afield, Rayner has improved his tank to complement his hulking frame and acquired the ball 25 times with six clearances and also kicked a goal.

The preeminent defender in the AFL furthered his reputation with another superb performance down back in the Cats solid win over the Crows. Gaining an equal career-high forty disposals for the second time this season, Stewart’s aerial mastery and superior judgement helped him pick off an extraordinary 17 intercept possessions and a career-high 16 marks. It’s incredible to think he wasn’t drafted until just before his 24th birthday and now stands on the cusp of a fourth AA-blazer before he turns 30. Adelaide big man Reilly O’Brien curiously dropped earlier in the season, coach Matthew Nicks perhaps frustrated with his inability to use an Android phone as his form was more than solid, has been dominant in the ensuing matches. A career-high disposal tally of 28 924 contested) was achieved through nine clearances, seven tackles and three contested marks. His hit out total of 46 included a whopping 15 to his team’s advantage as he produced one of the singular most dominant matches for the season across the competition.

With a mortgage already on the best recruit award in season 2022, Freo on-baller Will Brodie took on the hardest job in footy, quelling the influence of Petracca and Oliver, and did it with great aplomb, still managing to win 28 of his own disposals, including seven clearances. He’s a mighty player and it’ll be thrilling to see how he can gel with Nat Fyfe on his imminent return from shoulder surgery. Excitement machine, Michael Frederick played probably his best ever game on the big stage in the AFL’s colosseum. 17 disposals with two goals, and a further two goal assists only tell part of the story as his pressure, pace, and deft touch ripped open the usually impenetrable Demon defence in a withering 10-goal run. His tap back to Schultz will be replayed ad infinitum as a genuine highlight of the season as he worked brilliantly in tandem with his fellow Docker smalls.

Former pie, Adam Treloar continued his rich vein of form with a second five-vote performance in the past three rounds, cutting the Eagles to ribbons in the Dogs’ 100+ point evisceration. The busy midfielder collected a team-leading 35 touches with nine marks, four clearances and seven I50 as he contributed to nine score involvements. Ex First-class cricketer Alex Keath added a string to his bow by kicking a career-high two goals in an eye-catching performance, while fellow tall Tim English re-found his pre-hamstring injury form with 28 touches, 11 score involvements, 28 hit outs, seven clearances and a goal of his own as he bullied the makeshift West Coast ruck division.

The surging Suns were allowed to do as they pleased in this top-end clash, with Gold Coast defender taking full advantage through his superior body positioning and anticipation to collect a game-high 13 intercepts and a season-high six R50. His 18 disposals and six marks repeatedly cut off the Hawks’ infrequent forward forays and ensured the margin would give the ‘home side’ a generous percentage boost. Suns skipper Jarrod Witts was essentially unopposed in this match with Hawthorn’s three first-choice ruckmen unavailable through injury, and as expected did as he pleased. 18 disposals, nine clearances and a mammoth 11 hit-outs to advantage in the uncustomary conditions gave his midfield silver service that the Hawks could not match. Tiger premiership player Brandon Ellis was perhaps unlucky not to receive the top billing here as his relentless running, ferocity at the contest and ability to finish off possession chains with two goals went a long way to establishing the match-winning lead.

Fashion designers are already salivating at the thought of how the slimline cut of the AA blazer will frame Jack Sinclair’s flowing mullet, and the prolific Saint continued to play his part in a four-quarter masterclass against the hapless Kangaroos. 32 disposals, with an above-average ratio of 27 kicks at just under the elite 80% threshold gained his team a game-high 764m, eight marks and seven I50 rounded out another impressive performance in a potential Trevor Barker Medal season. Former two-time best & fairest winner Seb Ross continues to fly under the radar in a changed role where he can provide more outside run to his well-established ball extracting capabilities. 28 possessions, five tackles a goal and a goal assist are providing the perfect complement to a high functioning Saints on-ball outfit.

In front of 80,000+ fans, controversial Magpie Jordan De Goey showed all of his star qualities as he outlasted a high-quality field to claim BOG honours, it’s not always the volume of statistics that he claims, but the bombastic manner in which he generates forward thrusts and alters momentum. On this occasion 24 disposals gaining 500+ metres and a goal were the catalyst for the Magpies’ biggest win of the season against the improved Blues, incredibly taking a 1 game lead in their head-to-head record after more than 250 meetings. Two of Carlton’s off-season acquisitions, George Hewitt and Adam Cerra were front and centre in the Blues’ efforts to steal the game at the death, combining for over 60 touches, ten tackles, ten score involvements and ten I50s as Michael Voss’ multi-faceted midfield worked impressively to overcome the challenges of missing their starting ruckman, Coleman Medallist and likely AA centre halfback.

Port Adelaide returned to the winners list and have now recorded five wins in the past six rounds to keep their finals hopes alive, this match against the Bombers was no classic but a good example of team footy as the Bombers provided some of the better players on the ground but were mostly outclassed across the four quarters. Bomber ball-magnet Darcy Parish compiled another 39 possessions, the tenth occasion this season he has returned over 30 touches, in addition, he wrestled seven clearances and contributed to nine score involvements of only 20 Essendon managed for the game. Highly rated young Conor Rozee has felt the weight of expectation this season, but his form turnaround has corresponded with his side’s improved showing and he was a key contributor adding nine score involvements and seven tackles to his compact 24 touch, 1-goal game.