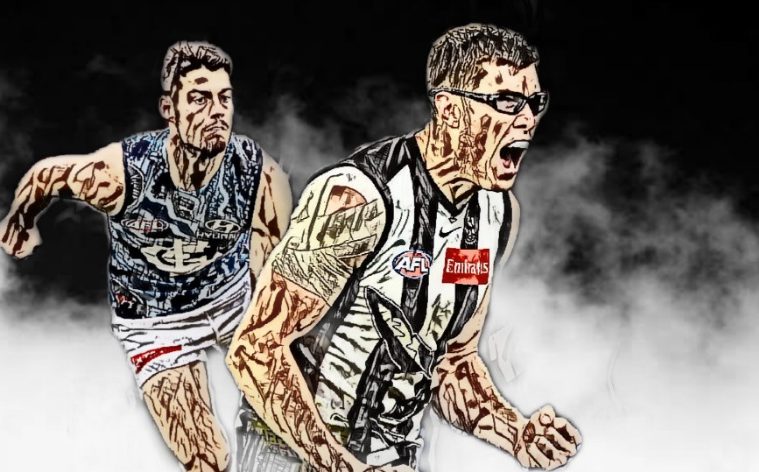 A packed MCG (80,627) bore witness to the latest edition of this storied rivalry; a rivalry as old Coca-Cola and Pepsi; as intense as Jesus vs Satan. Who could seize the moment in this clash of titans in the biggest of colosseums?

Both sides recorded fantastic wins against top eight sides last week, and are set to impact the prospective ladder position of the other as they go back and forth today.

The Blues seem to have finally returned to the upper echelon of the AFL, and the Magpies are building a solid, young core. In game number 261 between these rivals (128 wins apiece and 4 draws) one side would edge ahead on the ledger, but also solidify their place on the ladder. Would they stay in the top 4, or would the Pies draw level with some in the top eight? Here’s what transpired.

No, I’m not talking about a C-grade knockoff of a Shakespearean tragedy in the guise of Romeo & Juliet, I’m talking about the AC joint injury to Carlton defender Jacob Weitering early in the first quarter. Weitering is the Blues’ defensive marshall – he is assured by foot, he reads the play, he directs his fellow defenders where to go … and in the immediate aftermath of his departure from the hallowed turf, the Blues looked all at sea.

The Bee Gees sang about tragedy in their heyday, and for Carlton fans, there’s no bigger tragedy than Weitering going down, other than all the restaurants along Lygon Street being closed simultaneously.

Weitering is one of, if not the premier key defender in the game. He rarely gets beaten one-on-one and he coordinates the entire defensive setup of the Blues. In a big contest with Jordan de Goey, Weitering left his man and went at the ball. Unfortunately, the big Blue came off second best and didn’t return to the field. The Blues battled for the rest of the day, and almost pinched the game, but the loss of Weitering hurt them and saw the Pies able to navigate a shaky Blues defensive system and personnel.

Early injuries to key players have hurt the Blues this year, with the same happening to Patrick Cripps and Marc Pittonet as well, in first quarters. Unfortunately for Blues fans, they may lose Weitering for a few weeks and their grip on the top four is now much shakier.

While the game had been relatively tight on the scoreboard for much of the day, the Pies felt like they were grinding the Blues into the dirt. They had control of the game, and everything was on their terms. At various stages in the final quarter, it looked as if the Pies would finally break the Blues’ resolve.

When Ollie Henry kicked his second goal, he puts the Pies out by 23 points. Matt Owies converted, and then Henry kicked his third, re-establishing a 23-point lead with five or so minutes on the clock. It felt over. And then the Blues machine found something.

Owies responded and then the big, hulking full-forward for the Blues reminded everyone why he’s leading the Coleman Medal and why he might be the big difference for the Blues in 2022. Charlie Curnow took a great contested grab on Jeremy Howe and slotted from 50, and then found space to kick a second last quarter goal, his fourth for the match and his 37th for the season. He got the Blues within a kick, and the ball lived at their end in the last quarter.

Darcy Moore dived for a mark on the goal line, but channelled his inner Wayne Harmes late … except he was in the field of play and hit the ball over the boundary line. A point may have been more beneficial and allowed the Pies to setup, but Jack Silvagni had a flying shot with seconds left but unfortunately, it sailed wide for a point, meaning the Pies were able to hold on for a four-point win, and sit just outside the eight, only on percentage, in 10th, with the Tigers holding their spot of 9th, and the Bulldogs in 8th.

Both teams have a distinctive style in 2022. The Magpies have built their game around pressure – they chase, they harass, they tackle (losing the count only once this season in Round Three). The Blues on the other hand, have identified their midfield as being one of their strengths, and so build their game around clearance and contested ball dominance (averaging 145 CP per game, and being strong in centre bounce clearances). Like any team who wants to contend, the Pies came in with a plan.

Like the Rebel Alliance having the blueprints of the Death Star and thus how to stop the Empire, so Collingwood did their work and sent their fighters in to bring down the biggest weapon of their enemy. The Magpies took it up to the Blues in both categories all day, never letting the Blues completely have their way.

Through their tackle pressure, the Pies forced many errant kicks and turnovers that allowed them to generate repeat entries, and, for most of the game, hold sway with field position. By controlling the field position, the Pies were able to hurt the Blues with their forward handballs and their spread.

It wasn’t until they had to set their player settings to all-out attack, that the Blues were able to launch their audacious pursuit at pinching the win late. Winning clearances, with Sam Walsh and Patrick Cripps looking like they would die than lose in their attack at man and ball, the Blues mids almost won this for them. Where that manic run, drive, and hunger was for other parts of the game is the question that Michael Voss and his team will no doubt ask his team. Credit must go to Craig McRae and his team though, for a clear strategy that ultimately got them the four points, pushing the Pies ahead on the head-to-head ledger.

It’s hard to determine who won the midfield battle. It was an even contest for most of the day, but it was the place in which the Blues, in particular, would win or lose the game. Cerra, Cripps and Walsh all had great influence on the contest – as did George Hewett, who used the ball well all day. For the Pies, Jordan de Goey, Steele Sidebottom, Jack Crisp and Josh Daicos all contributed and got the ball moving forward. The Blues probably won the inside battle, but the Pies had better looks on the outside with their spread.

He started the game clear at the top, and he extended his lead by kicking four today. He started well, kicking Carlton’s first. After kicking his second, he didn’t have the influence we’ve come to expect from him … until the final five minutes of the match. He clunked a powerful contested mark and delivered from outside 50, and then found space to kick his fourth.

There has always been hype around Charlie Curnow and he’s long had the physical attributes to impact the game significantly. It’s so good, even as a neutral, to see him get his body right and show the competition what he can do. Lock him in for the Coleman now … with the delivery he gets, his marking ability, and the way he kicks the footy, he’s going to be hard to stop. The question is, can he crack, 70? 80? Maybe even 90 for the season? He has some contenders chasing him, so let’s hope this is the resurgence of big forwards kicking big bags!

Who is the Best Recruit?

It’s an unfair question to ask, I know. For some, it might be like asking you to choose your favourite child. Or choosing which is the best locally brewed beer and weighing up all the contributions and differences they have, and therefore making them the best.

Today saw Patrick Lipinski and Adam Cerra go, well, relatively head-to-head … in the sense that their teams were playing each other and they may have run past each other here and there. Both were actively sought out by their respective clubs in the off-season and both have contributed in great ways this season.

Cerra was on from the first bounce. And while Lipinski contributed throughout the day, it was his second-half where he really went to work. Both of them have slotted into the structure of their respective side and fit with the style of play their coaches have. Cerra is a workhorse who is active around stoppages, and accrues the footy for fun. He is also clean in space. Lipinski on the other hand, while capable of winning the hardball, thrives on the outside with his speed and ability to power out of stoppages – he also hits the scoreboard regularly.

It was a tight contest today. Cerra finished with 30 disposals, 14 contested, 6 clearances, and a goal going at 77% efficiency. Lipinski had 21 disposals, 9 contested, 2 clearances, and kicked 2.1 at 67% efficiency. Both teams would be happy with the contribution of their marquee recruits. You could raffle the more valuable today, but I have Cerra slightly ahead because of the impact he had throughout the day in getting the Blues moving at stoppage, and was consistent across the whole game. Lipinski’s third-quarter though … that was special.

You know when a cult figure is near the ball. Jack Ginnivan found space inside 50 in the first quarter and you could hear, and even feel through the TV, the anticipation rises within the Collingwood faithful. It’s a shame that he bottled the easy shot. Maybe he needed to celebrate first and that would have helped?

Sam Docherty just keeps on keeping on. His medical and health challenges have been well-documented, but what is often less documented is his football ability. He is a genuine A-grade player. He reads the play well, he uses it well, and he is full of courage and leadership. Another game, and another reminder as to how good he is.

The ‘other’ Daicos. I say other, but he should be the main man. All the hype in 2022 is on Nick Daicos and the potential he has. While he is skillful and no doubt will be a great player for a decade to come, his brother Josh is very good. He runs to the right places, and he is so cool and composed with ball in hand. No doubt Collingwood fans like him and rate him, it’s time for outsiders to do the same.

Dissent must only be a thing if you don’t get the free kick. In the third quarter, Nic Newman almost had an aneurysm as he channelled his inner John McEnroe or Nick Kyrgios and exploded with arm gestures and his vocal chords at the umpire. However, he won the free kick so, no harm no foul?

Corey Hart had a song in the 80’s called ‘Sunglasses at Night’ and so I’d be remiss to not talk about Mason Cox after learning about this song today. Cox is maligned by basically everyone … except the Richmond fans who are triggered whenever he takes a contested mark. Today, he found some form. You know that, because the Collingwood fans were chanting USA after he took a pack contested intercept mark in the last quarter. BT screaming his name with about 15 o’s and 27 x’s to emphasise the phallic nature of his name probably adds to the hype.

That’s all for today. A Sunday afternoon classic at the home of football between two arch rivals with the Pies sneaking through for a deserved win. The Blues must lick their wounds – and they have the bye to give them extra time to reflect – while the Pies face the Hawks at the ‘G next Sunday … they’ve beaten two top four teams in the past fortnight the Pies … can they beat a bottom side next week?

Thanks for joining us and don’t forget to subscribe to the Mongrel Punt for the best analysis, banter, and footy content you’ll find anywhere on the internet.