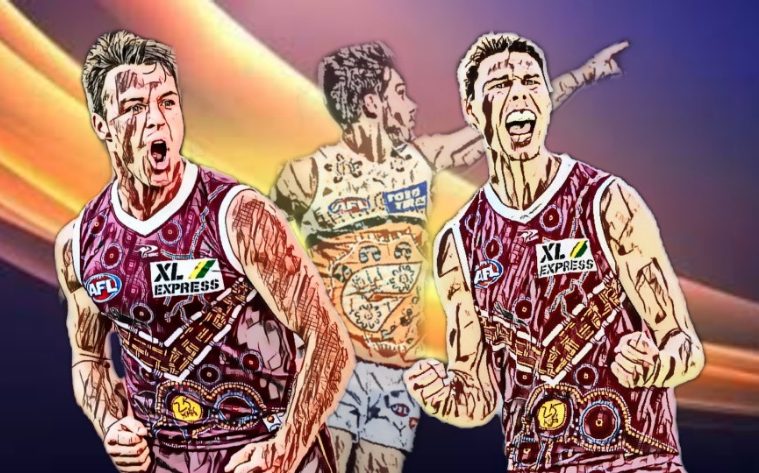 In outstanding conditions at the GABBA, Brisbane withstood an eight-goal opening quarter to
overcome the Giants in a hard-fought battle on their home deck.

GWS broke out of the blocks early, putting one of the premiership fancies on notice, before the Lions midfield kicked into gear and got things rolling- retaking the lead and holding on to record a 14 point victory 16.14 110 to 15.6 96

Let’s take a look at how this contest evolved

The Giants started off on fire using clean ball from the ruck to slice through the centre, with Matt Flynn decimating the duo of McInerney and Fort in the first quarter, before the Lions team remembered they had a job to do, and gave the midfield great use once the fightback commenced.

For all the fanfare that Clayton Oliver, Andrew Brayshaw and Patrick Cripps are getting in the Brownlow market right now, former winner Lachie Neale almost seems to be an afterthought, however, I urge you to take a flutter.

The former Brownlow medallist was absolutely superb in a clear best on ground performance, accumulating 39 disposals, five marks, six tackles and 2 goals – the 178cm champion thrived amongst the Giants. His work rate around the stoppages was absolutely tremendous, as he showcased his explosive lateral movement that has been rarely seen since his Brownlow-winning year.

Possessing arguably the best spacial awareness in the AFL, a fully fit Neale is an absolute nightmare for any stopper in
the competition. Perryman tried valiantly and had some handy moments of his own, but once Callan Ward went down with concussion, he was left to the job.

With GWS threatening late in the last quarter after cutting the margin to 10 points with a few minutes to go, Neale was able to extract a vital clearance to set up the clinching goal. Despite his outstanding attacking nous with ball in hand he had five or six important deflections around the stoppages that thwarted the Giants launching forward.

The move of Himmelberg to defence looks to be a winner early on. Despite a few errors by foot that Brisbane capitalised on to maximum effect, I believe the plus outweighed the minus, as GWS were able to set up three slingshot goals from defensive 50 exits from Himmelberg. The aerial factor he brings to the defence was noticeable, as it gave Sam Taylor a break from having to launch aerially at every contest. Himmelberg – a former junior defender was allowed free reign at a lot of balls, as Brisbane seemed to underestimate what he could do.

Himmelberg had 20 kicks from his 21 disposals, seven marks, nine one-percenters, 11 rebound 50s, and almost 750m gained in an outstanding effort. Not to mention, his nine “one-percenters” were also a game-high

Jarrod Berry has made the wing vacated by Hugh McCluggage his own in 2022. Today he was outstanding in a great two-way effort- reminiscent of the gun he replaced.

Any young wingman should watch the game he played, as he chose the precise moment to attack. He roasted Josh Kelly and medical sub, Xavier O’Halloran to the tune of 33 disposals, 10 marks, three tackles, a goal and eight I50 entries. His toughness is unquestioned, however, I believe his IQ is underappreciated, as Berry never gave a handball only to look for one back, always playing the team role first, he would instinctually look for a body to contact- allowing his teammate to continue forward. Every successful team needs a Jarrod Berry..

The bodywork of Jarryd Lyons on Tom Green frustrated the gun midfielder for the Giants, as Lyons’ selfless attitude allowed his cohorts to work themselves back into the game. As a Suns supporter, I have my own view on the now infamous delisting, however, the one thing that could never be questioned is Lyons’ sacrificial attitude to his team, and it’s this two-way approach that will prove vital in the business end, as the Lions go up against more powerful midfield groups

Matt De Boer allowed Daniel Rich no time, space or the opportunity to sit 10m off a player taking a mark, setting up the forward launch. Watching Rich becomes so frustrating, as the simple act of getting a body in proximity of him is a foreign concept to a lot of teams. Helping the matters were the Giants’ accurate goal kicking, negating cheap disposal from kick-ins.

After a three-goal opening quarter to Toby Greene, I thought Noah Answerth would be in for a rough day, however, his response was outstanding. He showed an outstanding defensive nous in the open field, collecting two HTB free kicks, however, he was also excellent in running off Greene when the play broke open – to which Greene didn’t seem too interested in following through. Greene had to be moved in the midfield later in the game to get going, but lacked his trademark spark.

PEATLING DOES IT AGAIN

GWS had to find somebody else to hit the scoreboard with Himmelberg shifted to defence, and just
like last week- up stepped James Peatling.

Giving the Lions defence fits, Peatling kicked 3.1 from 15 disposals and six marks, but his willingness to put his head over the ball was the best part, and he capitalised on the Lions’ sloppy defensive 50 tackling, twice getting collared high and converting one opportunity in the first quarter. He also showed off a handy aerial aspect, outpointing Callum Ah Chee in the air later in the match deep inside 50. The cleanliness at the ground level ball added something to the attack, as
Jesse Hogan often worked outside 50, allowing space for Peatling and Co to operate in.

Absolutely loved the response from Deven Robertson in this game. Brisbane look so much more composed with him around the ball, as he can create something out of nothing. Having him in the 2’s is an absolute waste, as this kid will be a future captain in my opinion, and if Brisbane aren’t careful it will be for another side. Played a crucial role on limiting Coniglio after half-time.

I love watching the Lions’ defensive unit, however, they could be in serious trouble in a very tight game. Mark my words… Darcy Gardiner will cost Brisbane a big game – he was very lucky to have not given away ten free kicks in this contest, as if he has even the slightest feeling of losing a contest he will either grab hold or push off.

Just before the soft 50m penalty goal to Daniel McStay- I think I’m missing a whole heap of mayo out of my fridge, have you seen it Daniel? Gardiner got away with two dumb blatant holding shepherds that went unwhistled. A very ordinary footballer hidden in a great structure.

Harris Andrews had a rough opening few minutes, making two defensive mistakes that directly led to the opening two goals of the game for GWS. However, he rebounded superbly after that.

Mark McVeigh actually rested Tom Green up forward, and his pack contest at the high ball directly led to a crumbing goal in the first quarter. Hopefully, GWS can find space to isolate him deep, as he can still be damaging around goals.

Great return to form from Brendan Starcevich, tough and unassuming as we have become accustomed to, he provided outstanding 1v1 contested pressure and a cool head with a defensive 50 exit.

Outstanding acts of courage from “Cement Head” Callan Ward who unfortunately copped a knee to the side of the head, ruling him out in the second quarter. How he was able to get up I will never know, as watching it made me stumble- and as I picked my beer up off the ground I wondered “How many of these blows can this guy take” (just kidding, no beer until after the review is typed)

Marcus Adams also had two outstanding courageous acts, getting wiped out by charging Jesse Hogan early and following that up by backing into a leading Toby Greene and his opponent, Answerth.

Brisbane often blazed away, but also made some crucial mistakes when lowering the eyes later in
the game. Stronger opposition made them pay, however, it’s something that they need to tune up for
their flag tilt.