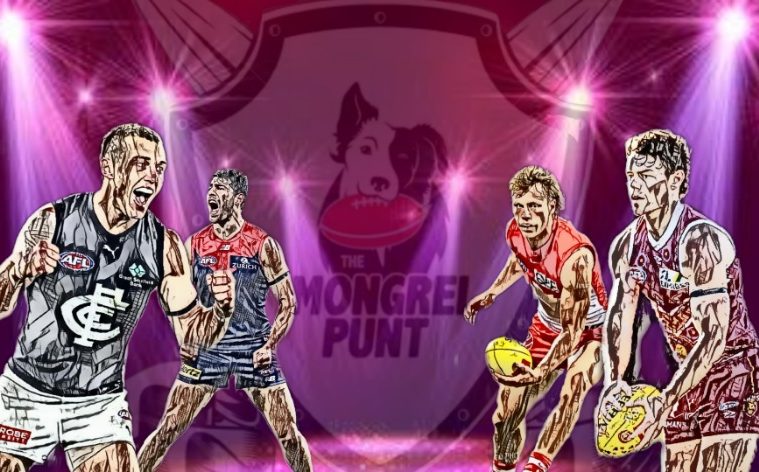 Mongrel of the Year – Progressive Vote Totals before R11

Round 10 action saw a few upsets with Collingwood and Hawthorn both outlasting top three opposition, while the Cats, Saints and Blues all reaffirmed their finals credentials. Consistent Collingwood star and favourite to claim back-to-back Copeland trophies has played 173 successive games, placing him tenth on the all-time list of games played without missing, and continues to go from strength to strength polling his 12th vote in the last three games to move into equal 7th on the leader board. The two Demon/Naarm midfield bulls also made a coordinated attack on the top of the leader board, Petracca’s four-vote performance moving him to outright second, while Oliver’s sublime best afield effort secured him fourth spot.

Carlton’s Charlie Curnow belying the absence of fellow big man McKay has been electric, while ex-Sun Will Brodie continued his outstanding run, and both move onto the leader board for the first time this year after strong performances on the weekend. Elsewhere it was shocking to discover that Bulldogs champion and 2021 Brownlow runner-up polled his first Mongrel votes of the season in his side’s excellent win against a gallant Suns, while the 2020 All Australian Cam Guthrie also netted his first votes in 2022 with a best afield outing against the Power.

After years in the doldrums, the Blues suddenly have an abundance of riches at the fingertips of coach Michael Voss. Coleman Medallist Harry McKay is absent, likely Brownlow frontrunner and skipper Patrick Cripps was down on his usual output, while nominal best-22 players Ed Curnow, McGovern, Pittonet and Williams are on the injury list. Yet, this Blues outfit appears to be made of sterner stuff than their recent predecessors, accounting for the Swans at their home fortress.

This week it was 2021 revelation, Sam Walsh who placed in the Brownlow and Leigh Matthews MVP Trophy putting his hand up, collecting 34 touches, four tackles and clearances with seven score involvements and six intercepts in a typically hard running display. Exciting Blues big man lit up the Friday night stage with five first-half goals on the way to six for the game, his athleticism, and aerial prowess a nightmare to match up on. While for the vanquished, Cal Mills further enhanced his AA chances with a vote to move into outright third place in the Mongrel award, a game-high eight tackles showing his willingness to do the hard work as well as the free running work where he has excelled.

Dogs skipper finally broke free of the shackles that injured ankle seemed to apply in the opening half of the season to lead his team to a stirring victory at Mars Stadium. Employed in the hybrid big midfield/marking forward role best exemplified by Dusty Martin and to a lesser degree Nat Fyfe, Paddy Dangerfield and Jake Stringer he was virtually unstoppable wherever deployed. 24 disposals at 75% efficiency, eight marks (three contested), seven clearances and eight tackles complemented his 3.2 in their fighting win. Intercepting defender Ed Richards played his best game of the year after an impressive month that returned 36 marks. In this one he led all-comers with 13 intercepts and 11 marks, four of those contested as he proved an impassable object. Rising star nominee Joel Jeffrey in just his sixth match gave his team a fighting chance with five goals, two of them spectacularly scored with his back to the goalposts.

Veteran Cats midfielder, Cam Guthrie turned back the clock with a 38-possession game that included 10 clearances and a whopping 13 score involvements. In a quieter than expected year, the Geelong #29 was excellent against the Dockers in their surprise loss, but this time strongly influenced a compelling win against the in-form Port. Power half-back Dan Houston was again prominent for his side, collecting 30 touches and taking a game-high 11 marks, with three of those contested setting up numerous attacks with his typically high efficiency. High-profile, and therefore highly scrutinised Geelong forward Jeremy Cameron continued his positive form with a fourth voting game this season after compiling easily a season-high 24 disposals, 12 score involvements, eight I50s, and a game-high 629m gained as he roamed far and wide to exploit the tight Power defence. He finished off his big game with three goals and directly set up another.

Flame haired Demon Oliver is unlucky the guidelines of this award only allow a maximum of five votes per outing otherwise surely would’ve claimed even more in a stunning career-high 45-touch effort. 22 of those possessions were obtained through contested situations moving him closer to the all-time leaders in that metric, a table he will almost certainly top well before he hangs up his boots. He also won game-highs in clearances (11) and I50 (thirteen), and showing his insatiable hunger also laid two tackles inside the attacking fifty. His partner in crime (insert butchered Ashes-to-Ashes ditty replacing Lillee and Thommo) Petracca was almost as effective, his thirty disposals containing eleven I50s which led to a competition high four direct goal assists. He also maintained his eligibility for the Lewis Jetta award with his solitary behind, and now only has to outlast big Cat Tom Hawkins for this dubious honour.

Four marks, four kicks, four goals – that’s Max King’s second-half statline, it literally doesn’t get any more efficient than that, and was especially important as his team overcame a dogged Crows outfit who led through three quarters and ended up with more scoring shots. King ruined his symmetry of fours with the five votes as most influential player in the ground, finishing with six goals straight from his seven touches including four contested marks in a match-winning performance. Brad Crouch continues to fly under the radar but has been a super consistent performer in the improved Saints outfit having polled in six of the past 9 games. He picked up 31 touches, two goal assists and a goal of his own as he was a winner in the head-to-head battle against another strong 2022 performer Ben Keays. Lastly, Brad Hill was back to his best as he celebrated his 200-game milestone, thirty disposals at the uber-elite 90% efficiency, ten marks, 586m gained a goal of his own.

Bombers fans hearts would’ve skipped a beat upon hearing L.Baker named best afield in a massive MCG clash, but alas it wasn’t favourite son Leon, nor was he even donning the red sash, but a similar in stature Baker, Liam headlined a powerful Tiger performance. Baker collected an easily season-high thirty possessions and delivered with precision to the tune of 90% efficiency. He supplemented this with strong defensive efforts to apply six tackles, create nine intercepts and then influenced the result with an equal game-high eight score involvements. Prolific Bomber Darcy Parish returned nine above his season average to find the ball 43 times, eight tackles, six clearances and six I50 show his workrate. Essendon will miss the efforts of Mason Redman who will miss through suspension after collecting a career-high 25 kicks and over 900m gained, he has also polled votes three times in the past month. Prestia was voted as the Yiooken award winner and proved his value to the side one again, the multiple Jack Dyer Medallist has troublesome soft tissues in his legs, but continues to hold a significant key to the Tigers’ chances this year.

The Giants were easily able to account for the lowly Eagles in Mark McVeigh’s first match in charge, presumably during a Sugar Ray hiatus (edit: oops that’s McGrath). Beleaguered former standalone skipper Coniglio continued his career renaissance and would be challenging Tom Green for the Kevin Sheedy Medal at this point of the year. He was able to attract the ball thirty-six times from seven clearances and a game-high ten score involvements leading to an outstanding three goal assists. Seven-gamer James Peatling enjoyed a breakout performance, recording career highs in disposals (23), marks (11), goals (3), clearances (3), goal assists (2), and I50 (5).

The star-studded midfields in this game featured two Brownlow medallists, two number one draft picks, multiple All Australians, and those banging on the door – if you predicted a 16-game rookie picked up in the oft-neglected mid-season draft as best afield in this one I’d respectfully suggest you seek medical expertise, or at least have a nice cuppa and a lay down, but in the wash-up that’s exactly what occurred. Hawk wunderkind, Jai Newcombe donning the famous number 44 guernsey stood toe to toe, eye to eye with each of those named above and out-tackled them, out-ran them, out-bustled them, and out-desired them to be the most influential player in a stunning Hawks upset. 27 disposals from nine clearances, a meritorious five from the centre despite losing the hit out count 27-71, 12 score involvements and a sublime one step goal capped off a complete game. Stand-in Hawk skipper James Sicily polled four votes to move back onto the Mongrel leader board and was irrepressible in the air, despite his lack of inches, his timing and ability to read the play more than makes up for any disadvantage. Almost half of his seven marks were contested, and eleven intercepts formed part of his 24 touches, gaining 665m at just under 80% efficiency.

Collingwood ironman Jack Crisp attracted votes for a third consecutive game, moving to nineteen for the season in another power-packed display. 27 touches, 16 of those won in contests, eight clearances, five tackles and a goal set the tone for an upset in heavy conditions against a formidable Dockers midfield. Young Oli Henry made the most of his early call up as medical sub replacing Mason Cox to kick four goals, assisting another and capturing 13 possessions. While first-year Freo mi,d Will Brodie stormed onto the Mongrel leader board with his vote-catching performance in the last eight weeks, his game-high 36 touches featured twenty contested possessions, and eleven clearances and he continued to drive his team forward throughout the four quarters.