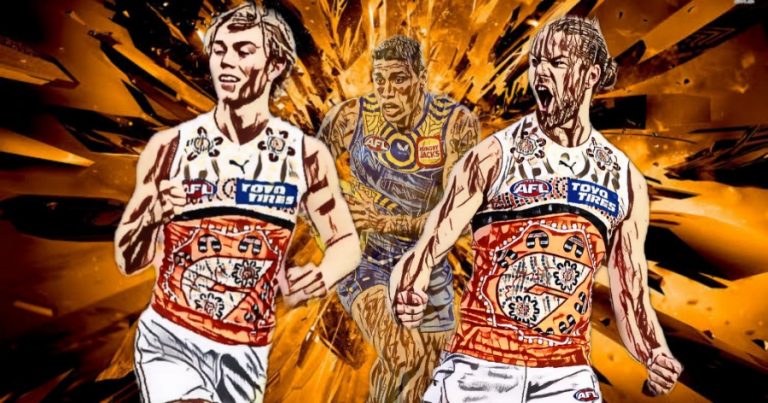 This wasn’t a match with the parity you’d expect from two teams who started it in the bottom four. Rather, it was a game where two teams that seemed to be in some kind of decline saw big performances from their stars and, as often occurs,  the team with more stars won.

It’s not as simple as that, but it’s easy to get caught up in these teams’ early-season forms and forget they’ve both played in Grand Finals in the last five years and contain a reasonable number of players who were present on those days.

The big news was (obviously) Mark McVeigh’s first game in charge of GWS and if this is the brand of footy they can run with they’ll be dangerous. That’s no guarantee, of course, but there’s enough here to make his early reign positive, as the story of the game itself was Mark’s Marginal Changes.

Callan Ward’s play off half-back (despite being listed on the ball) allowed him to make best use of his distribution abilities without forcing him to get more banged up than necessary in the contest. This meant that he showed bursts of the player he has been previously in a slightly lower stress role. That is was a success was less of a surprise than Coniglio playing more around the guts, winning seven clearances, or the two changes that look like they may have season-defining impact.

It was brought up early that Tom Green’s game last week tagging Patrick Cripps gave him a look at a midfielder who got forward relentlessly, and it’s not to say that that’s a complete eye-opener- surely he’s seen midfielders score goals before – but adding yet another trick to an already expansive box is going to make him yet more freakish. The other was moving Himmelberg down back, letting him use his body, size and marking ability to prevent first chance opportunities for Darling and Shuey when he went forward.

GWS started this game like a bullet from a gun, with their 45 point effort nearly matching their first-half effort against Carlton last week. Their pace was something else, as was their conversion rate, scoring from their first seven inside 50s. They weren’t a team there to fuck spiders, pushing the pace of the game through the roof in a way that led to that big first quarter. West Coast benefitted somewhat from the pace as well, with four first-quarter goals, but they weren’t converting like GWS were.

The turning point was maybe halfway through the first quarter, when West Coast scored three goals in as many minutes to cut the lead to five after GWS blew the doors off. The third goal seemed to ignite something in GWS, because in the next quarter and a half of football, GWS kicked ten goals to West Coast’s two, operating on a level of inside 50 conversion that’s likely not tenable over the course of the season remaining.

But what is tenable over the course of the season? Tom Green’s goalscoring ability, sure. The ability to stick your foot on the gas and absolutely blitz through teams, definitely! The pressure they displayed in the forward 50 that was so crucial to that inside 50 efficiency – indeed. They’re all highlights. GWS also had 12 goal scorers, seven of whom kicked two or more, and they did that mostly without Himmelberg there to hoof the ball to – De Boer had two after a quiet season, former midseason draftee James Peatling kicked all three of his career three goals, Zach Sproule and Jesse Hogan did what GWS have needed them to do all season. These are things that feel like they matter in the course of the season.

In West Coast’s otherwise dismal run since their last win, they’ve been at their most competitive in third quarters- beating Sydney by 7, losing to Melbourne by 2, beating GWS by 3 as the standout quarters there – but it’s not clear exactly as to why. Do teams stop the bloodletting for a bit? Is Adam Simpson really good at halftime talks? Do the West Coast Eagles have really good halftime oranges? Impossible to know, but there are positives in the fact that they stayed competitive and won the second half.

These aren’t the West Coast Eagles that won that flag but it’s a shock watching the broadcast and hearing the names get called out. I’ve not deliberately left the West Coast discourse this late for any particularly hater-y reason, neither, just to say that it’s so hard to know what to say about this team. Gaff and Shuey in, Ryan out, a good performance from Redden if not spectacular. Tim Kelly’s doing Tim Kelly things but looks like he’s a second banana in need of a first banana despite all of his underlying physical tools. McGovern almost completely anonymous in the first quarter, when the game was still maybe there to be won. Naish looks the goods but similarly to the Tim Kelly problem, they need someone to be the goods and bring that out of them.

Jamie Cripps’ two goals felt like they could be a similar turning point for West Coast and on another day they might be – two improbable goals can turn the tide, get the team’s heads up, grind out a result in the first half the way they did the second. Unfortunately, Jamie Cripps can’t win a game off his own boot, the West Coast defence, normally so well marshalled, allowed GWS to score from 78% of their inside 50s, and the two of those facets did not bode well for the result.

The inside 50 thing, to the eye test, felt more like GWS slicing through the midfield and scoring once they got it in there, but the more you look at it the more it reflects that West Coast had no reliable ball movers to transition the ball out of defence. For every goal like Toby Greene’s two early ones, where the ball goes in and is between the sticks ten seconds later, there are goals where the ball is locked in and stays in because the GWS midfield imposes themselves around the outside in a way that makes progression unlikely. Not a great look.

It’s the sixth of these in a row for West Coast, which has to be taking a toll on the players, not to mention the fans. They came in with an opportunity to overtake GWS and left it on the end of a thrashing from a team who looked beatable.

GWS leave with the knowledge that this is a game plan that worked, can work again, and is scalable with the inclusion of players like Taranto, Whitfield, and Preuss.

… And the AFL leave this game knowing that the only surefire way to buy a team a win is to give them a new coach. Mostly joking.