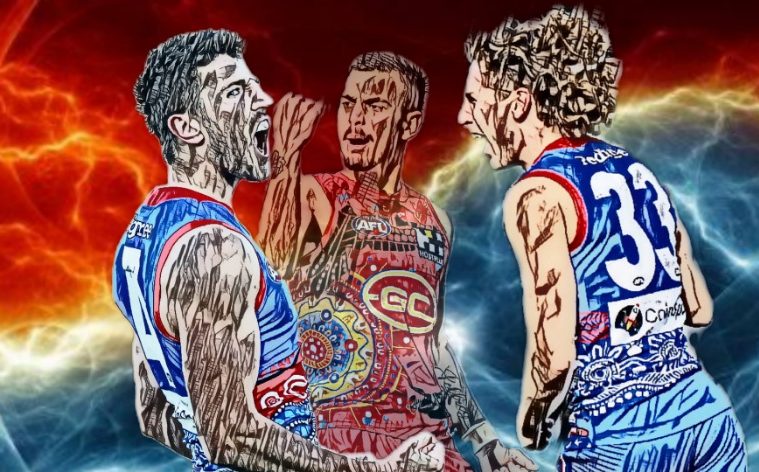 While, in fairness, the Bulldogs’ inaccuracy kept the Suns in the contest – however, the game should not have been close, as the “home side” put on a contested ball masterclass to thwart a spirited Suns fightback.

While Gold Coast had a massive advantage in the ruck, the Bulldogs’ midfield were on top for a large majority of the game, giving them an upper hand, as their opposition took a while to get going

The Bulldogs sliced through the Suns’ midfield pressure by hand, utilising their slick skills to navigate around the best efforts of the opposition. The Gold Coast forward line pressure was lacking for long periods, allowing the rebounding defence of the Bulldogs to exit far too easily. Furthermore, the defensive intent in the coalface was outstanding, closing the door on many forward movements due to crunching tackles. Early on, the Suns reverted to their old strategy of a chip and mark system in defence – this led to some basic skill errors, however, their long bomb approach didn’t pay off until later in the contest.

There was a massive amount of switching in the midfield so it was tough to track, however at stages Liberatore tagged Rowell, while Anderson duked it out with Bailey Smith – more on these later.

Bontempelli played off half-forward but pushed up the field into the stoppages, playing deep late in the game.

Aaron Naughton set the tempo very early on. His presence was absolutely tremendous in the first quarter. Four contested marks in a game of footy is great going, however, Naughton accomplished this in the first quarter alone, and what made it even more impressive was the fact that Sam Collins had the front spot on every marking contest – taking the perfect position on all four contests. Yet that did little to deter the gun Bulldog.

After one quarter, Collins deferred the match up to Rory Thompson, and Naughton responded immediately by taking another contested mark and kicking another goal, before Thompson was subbed out after re-injuring his troublesome left knee that he has previously had twice reconstructed. Collins and the Suns’ defence lifted on Naughton after the matchup was switched back to Collins. Naughton kicked 3.2 from 15 disposals and had five marks, however, his quiet second half was a catalyst for the Suns fightback. He still put forth an absolutely outstanding effort – easily taking the points.

It’s quite fitting that in the Sir Doug Nicholls round another player of Indigenous heritage burst onto the AFL scene. In his sixth AFL game, Joel Jeffrey set the stadium alight with five goals in a dominant performance. His second and third efforts were exemplary, as two of his goals were courtesy of repeat efforts. In a throwback to the legendary call of West Coast premiership player Peter Wilson – “like a cork in the ocean” Jeffrey intercepted a defensive handball in the goalsquare to boot a ball over his head, but also equally impressively followed up a spoiling effort to snap another while having an arm pinned in a Caleb Daniel tackle late in the game. He thrived on the space created by the Suns’ high half forwards and ultimately added another avenue that could keep livewire Alex Sexton sidelined. He possesses an outstanding aerial aspect to his game as well, which was not featured today, however, I expect him to be a regular fixture in the Suns attack.

For all the bad wrap that gingers get, Ed Richards won a battle today for Team Red. Absolutely colossal across half back, he was a thorn in the Suns’ side all day, and a massive reason as to why they were able to get over the line. Taking 11 marks (four contested) he led an astute Bulldogs defence that was reminiscent of their premiership days with their ball use, combined with run and carry. Gold Coast provided hardly any forward pressure early, and Richards made them pay with 20 high-quality disposals and 13 intercepts in a commanding performance. Whether a facilitator or creator, he showed what he was capable of, and hopefully, he can continue his good form later into the season as the Bulldogs continue their push into the finals.

While it may appear disrespectful to talk about the Bulldogs midfield brigade as one unit, I believe it’s a compliment as their unit as a whole put forth a tremendous effort. The pentagon of pain, comprised of Macrae, Smith, Liberatore, Dunkley and Treloar absolutely feasted on the Suns with a combined 138 disposals and 30 clearances between them.

The Bulldogs are incredibly hard to beat when they get to work in close by hand, creating running lanes. They are still the best team in regards to “one disposal back to go forward” in the game, as they pull the pressure in and then open things up. The Suns midfield was closed right up and is a testament to the desire that the Bulldogs mids have rediscovered- after a lean patch of form. A massive shout out to Jordan Sweet, who completely nullified the impact of gun ruckman Jarrod Witts for the majority of the contest. Without Sweet, the midfield would have found the going much tougher. Tom Liberatore put forth a massive effort to keep the clearances going the Dogs’ way.

No disrespect to Touk Miller and his cohorts, however David Swallow for a massive portion of the game WAS the Suns midfield. The former captain once again outlined why he almost HAS to be a part of the Suns midfield rotation once again, as he gave everything he had to get his team across the line. He led the Suns with 25 disposals, five marks, five tackles, 17 contested possessions, three goal assists and ten score involvements. For those that said he is “past his prime” I would strongly urge you to rethink that theory, as he showed he can still impact the game in the right circumstance.

I’ve been a very keen observer of how Rhylee West has gone about his AFL journey, biding his time for a shot. Today he played his best game for the club, and while he is still only very young, the Doggies HAVE to play him. Mostly, West had been somewhat of an instigator, however, he showed today what he is capable of with ball in hand. While some of the readers may not have seen Scott West play a minute of football, rest assured, Rhylee will be a gun – I’m backing him in.

Watching his cleanliness by hand immediately cast memories back to the time his dad was running around for the Bulldogs, and I believe he has inherited his father’s uncanny gift for ball usage in close. Sit back, relax and enjoy his rise… it’s coming

Dominant last meeting, Bontempelli once again was the catalyst late in the game. Playing as a high half-forward, he tore Gold Coast to shreds around the ball early, and then later, once the Suns were able to quell the influence of Naughton, he had a massive final quarter with two goals, two contested marks and two clearances to end the spirited fightback. This structure change could have unlocked something, as it forces a defender to man Bontempelli up around the ball, therefore giving him the edge around the stoppages. This means he is able to not only work over his defender around the ball but also escape a tag. Could a Coleman medal be on the horizon in the future..?

This might be harsh, however quite to the point- I believe Gold Coast have a big issue in the midfield, and my eyes are telling me it’s Noah Anderson. In this contest, he made quite a few errors that simply are unacceptable.

Early in the game he made an ill-advised switch that was chopped off and converted for a Bulldogs goal – admittedly a poor tackling effort from Rory Thompson led to that. Anderson was absolutely roasted by Bailey Smith, in particular, at the stoppages and needs to seriously improve his defensive positioning and intent to be a top-line, or even starting midfielder. Furthermore, he struggled big time with the pressure of the Bulldogs, in picturesque conditions he accumulated 21 disposals at 33% efficiency. While the six tackles were encouraging, the numbers do not dive into how often the Bulldogs were able to work off him.

Perhaps a move back to the outside of the wide-open spaces could work for him? Anderson looks like a wingman with his hard run, and he has made it work as a junior. Might be time to put him there and leave him there for a while?

The unheralded duo of Robbie McComb and Lachie McNeill gave the Gold Coast small defenders fits, with McComb, in particular, showing an outstanding work rate. The way he moves reminds me a bit of Daniel Giansiracusa in how he is unafraid to lead up at the ball, and also does not waste a possession.

I don’t know if I would call it a “cheapshot” however, there was a very ugly spoil attempt from Buku Khamis on Jy Farrar in the first quarter, with the forearm of Khamis collecting the back of Farrar’s head. I don’t think it was unintentional, however, the inexperience of the Dogs forward may have played a part in it. Farrar got up after about 30 seconds and duly converted the goal and played on after that.

Ainsworth and Rankine once again showed outstanding spacing and ability to work off one another, with Ainsworth a key factor in the Gold Coast fightback, while Rankine struggled a little more. However, Rankine once again displayed his rapidly improving decision making.

Once again, full credit to the Bulldogs’ pressure, as six Suns recorded a disposal efficiency of 50% or less.

Expect to see some changes to Gold Coast next week, with the likes of Rosas, Rowell and Fiorini massively struggling to impact the contest.