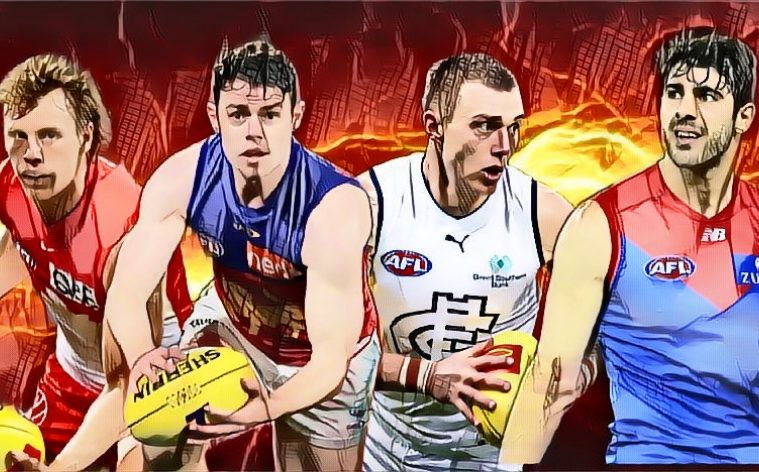 Mongrel Of The Year Votes – Round Eight and Nine Update/Leaders

Note: The news may never sleep, but when your intrepid reporter is currently in a foreign time zone where matches are being played at 2.35am it’s a struggle to deliver the usual in-depth reviews as well as maintain a four-hour per night sleep habit developed since becoming a parent. So apologies in advance for the brief summary of the best performances and leader board changes for the previous two rounds. Normal transmission will resume from round 10, once the jetlag has waned.

Rejuvenated Carlton skipper, Patrick Cripps continues his incredible form claiming the maximum five votes for a now standard 35-possession, two-goal outing to take a stranglehold at the top of the leader board, eight ahead of the chasing pack of three. Joining those in equal second place is 2020 Brownlow Medallist, Lachie Neale who gathered a game-high twenty-nine touches to complement his ten clearances in a four-vote effort.

Other outstanding performances came from ex-Sun Peter Wright whose six majors led his Bombers to a break-through win, fellow ex-Sun Will Brodie who peeled off a career-high 37 touches against the Kangas and current Sun, David Swallow who cashed in during his team’s upset of the Swans with 24 disposals, eight score involvements and a goal of his own.

Further movement on the leader board as Sun defender Sam Collins with votes in a sixth match this season to date, formerly wantaway Dog Josh Dunkley, and Lions skipper Dayne Zorko, who has polled in four of the last five games all moved on to 15 votes and equal 8th position. At the top end things are getting very interesting with Callum Mills and Lachie Neale courtesy of four votes each broke their deadlock with Ben Keays and are now both four votes away from Cripps in the lead. Dynamic Demon Petracca claimed yet another best afield recognition for his 28-possession, 14 score involvement and 2.4 effort and moves into outright third.

Adam Treloar was the Rose-Sutton Medallist on the back of his 35-touch, eight clearance and three goal game. Meanwhile Tiger co-skipper Toby Nankervis obliterated his young Hawk opponents with 20 disposals, 35 hit outs and an equal game-high eight clearances. 2021 Brownlow Medallist, Ollie Wines was back to his best after a heart issue gaining maximum points in their game against the Roos, game-highs with possessions (32), score involvements (12), clearances (8) and 2.4 capped off his first vote attracting performance of the year. Former Tiger, Mabior Chol pushed out by the glut of Richmond big men, continued his encouraging form on the Gold Coast posting a career-high four goals in wet conditions to steer his team to a commanding win over the Dockers.