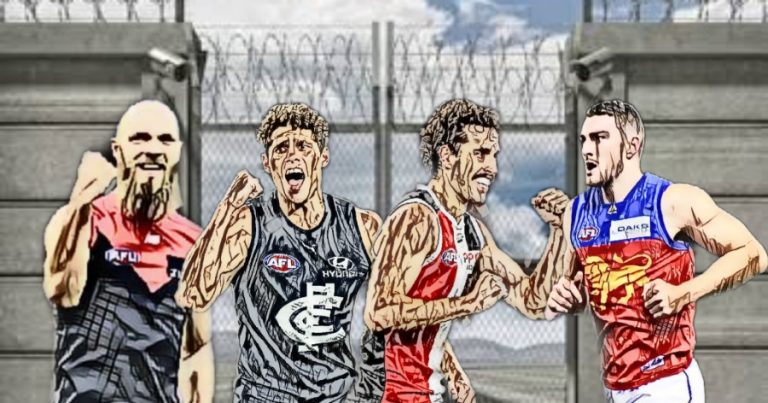 The “Get out of Jail” Marks – Round Nine Update

We have a new outright leader, and he is being pursued by one of the early-season favourites who has finally made his move to the upper echelon of our rankings.

Yep, never a dull moment when it comes to the stat that I kind of, sort of, perhaps made up just for this season – the Get out of Jail marks.

I pictured Max Gawn, who is consistently targeted by the Demons as their ‘get out of jail’ option sitting atop the rankings. I pictured Matt Taberner, with his strong hands right up the top, as well. Only now is Gawn starting to elevate his game, whilst Matt Taberner has been battling injury early in the year. As such, I have been forced to re-evaluate.

It is a mark that can only be taken by a player when his team has the footy. He provides the target to get the team out of jail.

It can only be taken between the fifty-metre arcs. This is an arbitrary decision, as it is meant to highlight the blokes who take grabs when the teams are forced to go down the line or take the only option they can to exit defence..

As such, it is only recorded when a player presents up as the primary target as the team either leaves the defensive fifty, or works down the wing.

I’m adding this one as a quantifier, as I have had a couple of “what about so-and-so?” questions asked already. GooJ marks happen on slow plays. It is no use attempting to justify a mark, or several marks in this category when a team is breaking and moving the ball quickly. If they’re doing that, they’re not really getting out of jail, are they?

Here are the players that took the big “GooJ” marks in Round Nine, and our overall leaderboard.

Paywall… what a pain, right? Well, it is how we survive and keep the page clean of gambling ads. Yeah, that’s right – we don’t just talk about how bad they are, we just don’t accept their coin. This article is the fifthof six… maybe seven members’ articles this week. You can access this, additional exclusive columns, and get the game reviews from HB earlier than everyone else by becoming a Mongrel Member. Plus, you help us grow.