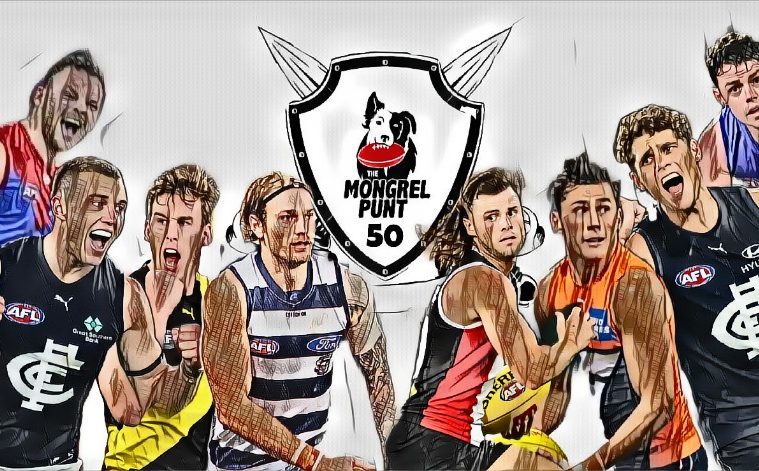 Injuries, suspensions, poor form, your finger poking through the toilet paper… you’d be surprised what can impact the standings in The Mongrel 50 from fortnight to fortnight.

However, the most impact is a big performance in the last four weeks. That’s where this ranking system is different to all others – it captures the players in a purple patch of form and allows for a lot of movement based on their recent work.

Previous weeks are obviously going to be counted, but it is with a bit of a percentage hit.

So, in a nutshell, the last four weeks of footy are scored at 100%, whilst any games before that are hit with a 50% penalty. That allows for us to respect what a player has done, but focus more so on what a player is doing over the last month.

It also allows for quite a bit of fluctuation in The Mongrel 50 from fortnight to fortnight.

So, you’ve heard of The Mongrel 50, right? It’s like Robbo’s Top 50, only I genuinely put thought into it and use a formula to work it out. I mean, sure, I could just knock back eight beers and roll out a list very similar to the one I did last year – that seems to work for him – but I prefer something that is a little more nuanced.

So, how do we assess players?

Players are assessed on both stats and votes throughout each round. Defenders are assessed on stats pertinent to their roles – intercepts, spoils, rebounds, metres gained and disposal efficiency. Forwards have to rate well in score involvements, marks and tackles inside 50, and contested grabs. Mids and rucks have their own criteria to fill, as well.

The theory is, that with each position only being assessed in the aspects of the game that apply to them, we get a great mix of positions all throughout the Mongrel 50. I suppose the test for this is when we start to look at the top ten overall. This season, I made some really minor tweaks to prevent this from becoming just another midfielders’ playground. I reckon I’ve done okay.

So, without further ado, the third instalment of the 2022 Mongrel 50. Previous rank in parenthesis.

Righto, before we get into the “what about…” questions, a quick look at the top ten overall.

No rucks, which is a disappointment, but four defenders, three forwards, and three mids There you go… player ratings diversity… to a point.

After scoring zeroes in rounds four and five, Patrick Cripps hit back hard, with big scores in the next three weeks to regain his hold on the top spot in the 50. He was ranked first in our R4 version, but his injury and absence caused him to fall to number four two weeks ago.

And then there is the second part of the Blues’ quinella at the top – a massive Round Eight from Charlie Curnow boosted him into second spot, as he had close to the complete forward’s game. Sic goals, 21 touches, ten marks, 15 score involvements, seven i50s, and four contested grabs… those who doubted Charlie are starting to look a little foolish.

And yes, I was one of them for a while.

Also using the last couple of weeks to launch into the top ten is Tom Lynch, who has smashed it over the last fortnight, with 13 goals to his name and some dominant performances.

So, why would Curnow rate above Lynch?

Lynch has scored very heavily over the past two weeks, but had only one potent game in the previous six weeks. Curnow has had a pretty damn solid last four weeks, and also has a good week dating back to Round Three. When you apply the formula to all performances, Curnow has a nice combination of points over the last four weeks mixed with some better early-season form.

Jayden Short has been in every ranking for the past year, but this is his first time cracking the top ten. Gives an indication as to where he currently sits at Tigerland.

Righto… this is where people start getting butt-hurt, so I’ll address a few and we can go from there.

Injury obviously plays a huge role, here. George Hewett would be the prime example, with his falling out of the 50 despite stellar form up until then. Sitting in 30th spot two weeks back, he was always going to struggle after missing the last two, and fell to 54th as a result. Same as Joe Daniher, who went from 44 to 74 this fortnight.

And then there is poor form, or form not on par with that which the player displayed early in the season. Given the emphasis on the last four weeks, players like Zac Williams and Jordan de Goey have felt the pinch. They fell to 85th and 58th respectively.

Lastly, if a player was riding on a big four-week period for the last rankings, and then dropped away a bit, at least two weeks of their big totals are hit with a 50% hit, so falling away, though seemingly unfair, is completely justified in this formula. I’d cite Max King as the prime example in this regard.

Ah yes, my favourite part, where I cannot possibly give you an answer you’ll be content with.

What about Will Brodie?

I know… I know… he was massive this past week, wasn’t he?

How about the week before?

Currently, he sits in 72nd, and believe me, I’d love to see him smash it for two weeks in a row and crack the 50 – I love his career resurrection. That said, when you’re alternating good weeks with average ones, it makes that a little more difficult. Playing in a very balanced team kind of works against him, as well.

And what about the rest of the Dockers, damn it?

Brayshaw is the standout – we all agree on that?

And then there are players like Cox, Acres, Serong, Ryan, Aish, Switkowski, Schultz… they all bob up here and there and have good games, but they seem to share the love, which means they have this great balance between them… that simply is not reflected here.

Hell, even with the small bonus awarded to players who accrue points as part if a winning side, Freo are so well spread in terms of points that they’ve made it redundant. If you choose to treat that as a bad thing, I reckon you may be missing something

What about Jack Crisp?

Interesting –   he’s at 62, but has been scoreless in two of the last four weeks. That’s not how you jump into the top 50. Sorry mate.

What about Hugh McCluggage?

Don’t be fooled by one huge week. Has been workmanlike in his new onball role, but has not been dominant by any stretch.

What about Touk Miller?

Real close this week, sitting at 52nd and just marginally behind the 50th ranked player. I think even the most ardent Suns supporter would admit that his year to date is not on par with his 2021 campaign… but he is warming up.

What about Jack Steele?

Missed stat-triggers in each of the last two weeks. Was ranked 36th prior to R7, and with two zeroes in consecutive weeks, falls to 81st. Ouch… but I make no apologies when others are simply performing better.

The Dees have the most, and rightfully so, with six representatives, reflecting their form this year.

Richmond bob up with five, and St Kilda,, Sydney, Adelaide, Geelong, Carlton, and the Dogs all gave four players included.

The only team without a representative, for the second-straight fortnight, is North Melbourne. Their highest-rated player has been injured for three weeks – Aaron Hall. That is pretty sad – he is at 111th. Nick Larkey is next best at 120th.

And that’ll do me – as always, open to questions about players and criticism, but keep it respectful, hey? You could always devise your own crappy formula, right? – HB