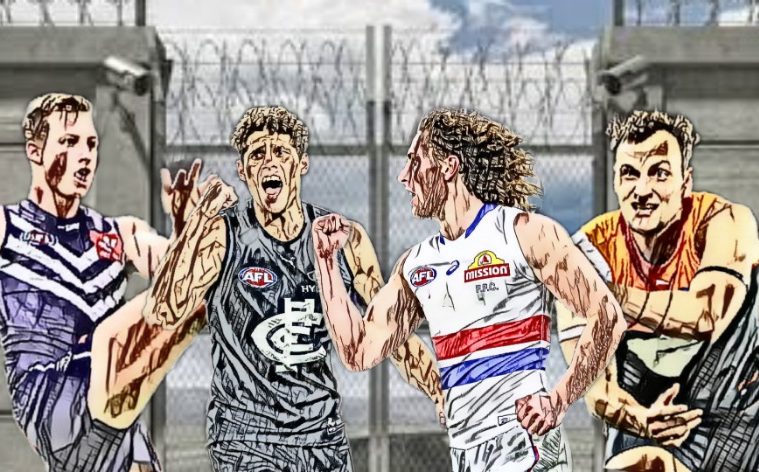 The “Get out of Jail” Marking Leaders – Round Eight

You have to feel for Daniel McStay.

He was having the type of season the Lions both wanted and needed from him and was consistently posting excellent numbers in our Get out of Jail tallies, and then he rolls an ankle in the first quarter…

… and the vultures circled. No Eagles, no Hawks, no Magpies, no Crows, no Swans… just vultures.

You see, McStay was our leader in the GooJ marks coming into this round, sitting outright first with a bunch of players nipping at his heels. Not only has one taken a chunk out of his ankle now – he has joined him at the top of the heap, and with the diagnosis being around three weeks out of action, I expect a few more to leapfrog him.

And that is after Joe Daniher, who was in the top five at the time, went down with injury, as well.

I pictured Max Gawn, who is consistently targeted by the Demons as their ‘get out of jail’ option sitting atop the rankings. I pictured Matt Taberner, with his strong hands right up the top, as well. Only now is Gawn starting to elevate his game, whilst Matt Taberner has been battling injury early in the year. As such, I have been forced to re-evaluate.

This season, we commenced a new stats column at The Mongrel Punt, focusing on the players who take the big relieving grabs. They don’t all have to be contested, but they are the clunks down the line or as a team exits defensive fifty that tend to open the game up. I call them Get out of Jail marks, of ‘GooJ’ marks, for short, and whilst I don’t think it is something that will be widely picked up, it is a stat that is underrated in terms of the value it gives a team.

I gave you the first column for free in Round One. It was met with a rapturous response… or at least a comment or two. From Round Two onwards, this has slotted into our members column rotation every week – The Mongrel does the work for those who support us.

Here are the players that took the big “GooJ” marks in Round Eight, and our overall leaderboard.

Paywall… what a pain, right? Well, it is how we survive and keep the page clean of gambling ads. Yeah, that’s right – we don’t just talk about how bad they are, we just don’t accept their coin. This article is the firstof six… maybe seven members’ articles this week. You can access this, additional exclusive columns, and get the game reviews from HB earlier than everyone else by becoming a Mongrel Member. Plus, you help us grow.