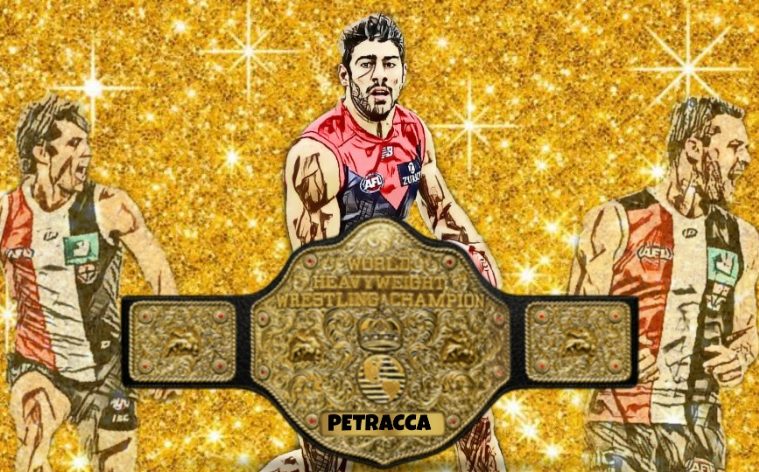 As the Dees roll over all in their path, the Mongrel Punt Midfield Championship Belt remains fastened around the waist of Christian Petracca.

Winning the belt in the 2021 AFL Grand Final, ‘Trac has made seven successful title defences, most recently knocking over Tom Mitchell, Jaeger O’Meara, and emerging star Jai Newcombe. With the fourth-placed Saints on the radar, the challenges don’t stop coming.

Jack Steele, Brad Crouch, Jade Gresham… any of those three men are capable of a match-winning effort, but to be the man, you’ve gotta beat the man. And in a twist that works for the champ, you’ve also gotta be on the winning team to lift the title.

It’s the Dees v the Saints this week and the champ puts the title on the line again.

Each week, the champ defends his title in this system. In order to unseat him, you must do the following.

Note – at the conclusion of the weekly update, a full championship history, spanning from 2017 to the current day is available, including a full history of title reigns and most successful defences, etc… We are now at 8K+ words in this baby, and the history grows every week. Settle in for the long haul…

Paywall… what a pain, right? Well, it is how we survive and keep the page clean of gambling ads. Yeah, that’s right – we don’t just talk about how bad they are, we just don’t accept their coin. This article is the fourth of six… maybe seven members articles this week. You can access this, additional exclusive columns, and get the game reviews from HB earlier than everyone else by becoming a Mongrel Member. Plus, you help us grow.