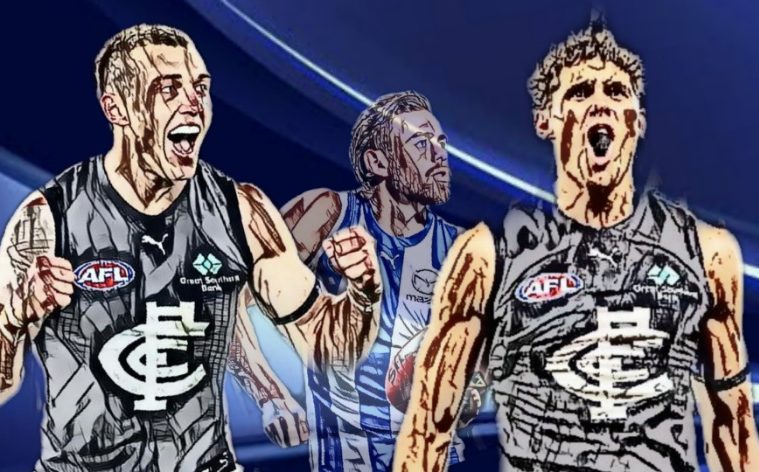 The McKay cup has come and gone again for another year, and once again, the general public was disappointed that the brothers weren’t able to sync up their calendars enough to be able to play on each other. It’s actually to the point of comedy now. I mean, have we ever seen the McKay “brothers” in the same place? Apparently, even their teammates haven’t…

North Melbourne are getting battered from pillar to post. After their good showing against the Swans, the Kangaroos haven’t really played an entire game. They’re patchy. They’re just about the definition of it right now. And this game served as another perfect example.

North Melbourne was in this game for a half of football. They were tough, relentless and looking very much like a chance. Then the Blues flexed their muscles in the third and kicked five straight goals to blow the Kangaroos out of the game.

The last quarter was played by two teams who knew the result and were ultimately playing preservation football.

Well, let’s get into the stuff that mattered…

I have to start with the moment highlighted between Sam Docherty and Ben Cunnington prior to the match. Both men have been absolute warriors for their clubs and faced tremendous obstacles in life. It’s just good to see them getting around each other. We all hope to see Cunnington back running around for North again.

Ivan Drago V Rocky Balboa (How it Should Have Ended)

I don’t know if the comparison has been made before, but Cripps just reminded me of Ivan Drago from Rocky IV, out there. Just a brutal towering specimen who looked at his opponent and simply said “if he dies, he dies”. Cripps had his own version of Rocky accompanying for most of the night in Hugh Greenwood. It wasn’t a tag, but just looked to be North’s best matchup for the Carlton captain in the midfield. Now, most people will be Saying “But Slugger, Rocky won the fight against Drago in Rocky IV”. Yes, in Hollywood the smaller guy won, we’re here in the real world where Rocky got stomped.

Greenwood, himself, has had an interesting year. Effectively stolen by North Melbourne in the dead of night late last year, I feel that North would be wanting a little more from him and that even he would say that his year hasn’t quite been up to his previous standards.

Cripps finished the night with a stuffed stat sheet which even included a goal assist ruck tap. Greenwood was valiant in his efforts, but Cripps is just far too much of a beast for any mere man to bring him down. Maybe if you had a pack of men? And they all took a limb each? Hmmm…. I’m probably still giving it to Cripps.

The Carlton captain just seems unstoppable sometimes and his ability to take tackles and soak up multiple opponents and then feed the ball out is impossible to match.

Harry McKay and Charlie Curnow probably deserve their own special mentions, but I’m lumping them in together, as they are always going to be referenced as a combination. Legitimately, they rival the Cats key forwards as the most dominant attacking duo in the competition. They didn’t quite kick 11 goals on this North defence like the Cats boys, but they kicked seven between them and also kicked 6 behinds. 13 scoring shots from your two big guys is a good return. In fact, let’s look at some of their combined numbers in this game.

McKay and Curnow had a combined 17 marks, of which, seven were contested and eight were inside forward fifty. They had 27 disposals, which included 14 score involvements.

Another fantastic match from the former skipper. Docherty is unflappable across halfback as he continually makes good choices and positions himself in front of the footy and stifles opposition forays forward. Docherty also had a stack of the footy, as he usually does, but people won’t be able to say he got it through cheeky kick-ins, as North only kicked four behinds for the entire match. Which makes it hard to argue that effectively all of Docherty’s disposals were earned in this game and his numbers stack up appropriately.

A bit of Mongrel

Jason Horne-Francis has come into the worst team in the competition, and one thing that young players going as high draft picks are not used to doing, is losing. It’s an adjustment to say the least. Sometimes a player will go into their shell and sometimes they will rise. Horne-Francis is not a superstar yet, but this game had all the hallmarks of a player who is building to that level. His physicality was particularly on show in this one. Sure, he got frustrated and did some stupid things, but he was not going to let anyone walk over him on the field. I’m a fan of targeted aggression, so Horne-Francis still has some work to do, but at least we know it’s there.

Jack Carroll made a very solid debut in this game. After an untimely first possession on the wing where he got crunched over the side-line, Carroll did not put a foot wrong. He kicked the first goal of the match with his first kick in AFL footy.

Probably a bit of a cop-out but North Melbourne really just need to look at the second quarter of this game and try and bottle it. So many of their players were involved. They were daring with the footy and this attacking mindset resulted in creating some easier shots on goal. You only have to look at the second halves of Stephenson, Horne-Francis, Davis-Uniacke, and see that they just couldn’t hold onto the form they had found in the second quarter.

If you don’t mind, Umpire

I am usually not one to mention umpiring but there were a couple of decisions in this game that were genuine head-scratchers. The one I want to highlight was in the first quarter. A young North player, Curtis, was running on the wing when Saad grabbed his jumper and was kind of just being dragged behind him for a metre or so. He wasn’t impeding him in any way, really, just hanging on. Curtis then handballed the ball and was actually pinged for holding the ball. It was a very poor decision.

In terms of the incident where the umpire was run in to by a player which may have contributed to a turnover and North Melbourne goal, I have no issue with that play. The umpire was appropriately positioned. The player made contact with him from behind due to a poor kick to them. Nothing the umpire could do. The game continued. Move on.

A Debut to Forget

You have to feel for Miller Bergman. Given the opportunity late to debut for North, as Corr was a late withdrawal, but then landed awkwardly on his shoulder in the second quarter, which ended his night. Not ideal, but let’s hope he gets another crack at it soon.

Larkey’s decision to tunnel Lewis Young, who had leapt up for a mark, after the whistle had stopped play, was really poor reflection on him. Not just because it cost his team a goal through the ensuing scuffle and resultant multiple 50-metre penalties, but also on what sort of player he wants to be known as. A player in mid-air is as exposed as a player with his head down over the football. Larkey didn’t even just sort of wander under him, he deliberately accelerated and put his shoulder into the bottom half of Lewis with the sole purpose being to affect his ability to land. It really gets worse each time you watch it.

The first goal in 78 games for Jacob Weitering, thanks to the aforementioned consecutive 50-metre penalties which put him in range, along with a 50-metre bomb off his boot.

The Other Young Roo

A lot has been made of Jason Horne-Francis being a ready-made player for the Kangaroos, but I reckon a kid who played just his second game in this match looks an absolute lock for the remainder of the Kangaroos season. It’s Paul Curtis. He just looks like he belongs at the level and doesn’t seem to panic with the footy either. Is very clean for a young player as well. I’m a fan.

The Players I Missed

Carlton Fans will no doubt be getting to this point and thinking “What about Kennedy? What about Saad? What about player X? rest assured I did see them out there, but I’m not old HB and can write for you guys for 4 hours for every game and spin endless stats for you.

Kennedy was right there in the trenches with Cripps in this game. Cripps must be finding it nice to have another big body in there with him, carrying some of that load.

Saad was right there next to Docherty and spring boarding this Carlton team from Defence to attack. Even when getting tripped by the opposition.

Owies and Silvagni also performed strongly. Hitting the scoreboard and with good defensive pressure. Which is what you need from those guys.

The Blues are now sitting nicely at 5-2 and should be looking to hit their bye with a 7-4 record, at least. Once again, their strength was their clearance game, which was the major source of their scoring in the second half. An interesting match against the Crows next week in the Sunday afternoon graveyard slot.

This was a disappointing loss for the Kangaroos. And now they have the ominous-looking trip over to Perth to play a very hot Fremantle side they may just be licking their lips at the fixture. We’ll wait and see if they can pull a performance similar to when they went to Sydney out of their hat.