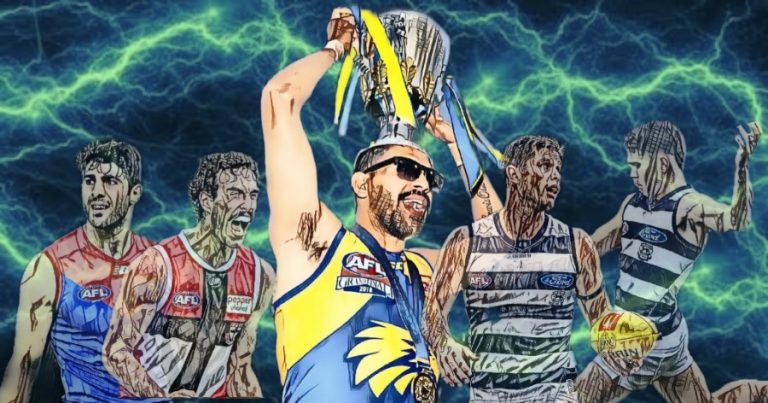 Four Players In Contention For The Jetta Award

But what the hell is The Jetta?

After a big, long weekend of Anzac Day celebrations welcome back to the weekly column that is more unconventional and wackier than a Jack Ginnivan highlights reel but just as spectacular, if I do say so myself. On a side note, it is great to have the opportunity to be able to watch every AFL match live without games overlapping each other, but I digress. In this week’s edition I look at an award I have dubbed The Jetta which is named in honour of former Swan and Eagle Lewis Jetta.

Lewis Jetta famously started his AFL career as a small forward for the Sydney Swans in 2010 where, across the span of the first 15 rounds managed to kick 19 behinds before he slotted his first goal. It was so fascinating at the time that it garnered regular media attention and fan speculation as to when he would slot his first goal. To me, it was so amazing that someone could show so much skill and ability yet continually fail at what is the prime objective of the game that I just had to find an award to name after him. This is when my previously named Dunstall Award (this previous naming will be obvious later) was given a re-brand.

So, what exactly is The Jetta? This is the award given to the player who can last the longest into the season by kicking a behind in each round.

So, we start Round One and any player who kicks a minor score is now in play and can win The Jetta – subsequently, as the rounds progress players either get dropped, injured, suspended, or fail to register a behind and are therefore eliminated. It is sort of the Survivor version of AFL behind kicking. Occasionally, we get to a situation where two or more players remain, and if they all get eliminated in the same time then we go to a countback where the player who has kicked the most behinds wins the award.

It’s worth contemplating just how impressive it is for a player to kick a behind in every game and in doing so you will realise the significance of winning The Jetta. Firstly, the player must remain healthy and, on the field, doing this has only gotten tougher with covid and coaches resting players. Secondly, they must not get suspended and yes, this has cost some players The Jetta. And of course, thirdly they must be able to kick a behind each game. Now some players are regular behind kickers but if your team is having a bad day, you might not even get a shot at goal or as we have seen recently with Matt Taberner you can get a hot boot which means you kick goals only and therefore inadvertently cost yourself a chance at the glory of The Jetta.

Wrapping it all up The Jetta truly is one of the most amazing awards to win. Longevity through a season and the ability to regularly do what you’re not intending to by kicking a minor score – it’s an award only the best names in the AFL have won, so let’s first look at this year’s contenders after Round Six before a roll call of past champions.

Firstly, let’s take a quick look at how the year has progressed.

Round 1 – Congratulations to the 123 players who put themselves in contention by kicking a behind in the opening game of the season. Sadly. we lost our defending 2021 champion Matt Taberner who missed two weeks with a hamstring injury. 2019 winner Jeremy Cameron who had kicked 2.0 in the first quarter was also eliminated when he was subbed out with what was feared internal bleeding but turned out just to be a heavy knock. He has since registered a behind in every match, so that may yet prove very costly.

Round 2 – 75 players were eliminated in this round leaving just 48 in contention. A pre-season favourite and 2016 winner in Joe Daniher kicked 2.0 to rule himself out.

Round 3 – A further 24 players were eliminated this round leaving that same number in contention. Levi Casboult was a player I have always thought capable of contending for The Jetta, but he went out surprisingly kicking 3.0 against the Giants.

Round 4 – 12 players were eliminated as the field was halved once again.

Round 5 – Just four players were eliminated this round. Magpies Jack Ginnivan and Brody Mihocek were ruled out with injury whilst Karl Amon and Connor Rozee had good games but couldn’t register a behind in Port’s massive comeback against Carlton.

Round 6 – Again four players were eliminated. Aaron Naughton was a bit quiet for the Dogs, however, he did kick two goals whilst Nick Larkey was completely shut out by a very strong Cats defence and didn’t register a single shot at goal. Jack Silvagni was ruled out of playing for Carlton with injury, so couldn’t even have a crack at a minor score whilst Tim Membrey also had a quiet one for the Saints while others such as Higgins and King were provided far more opportunities.

Sporting a magnificent moustache in 2022, it was no surprise to see King elevate his game this year. In 2021 he played 20 games and managed a behind in 16 of them which is ideal preparation coming into your third year of trying to win The Jetta. A career-high seven behinds last week saw him take the lead and with the Saints “rampaging” midfielders, we expect he will continue to get plenty of ball. Only bad luck or a seriously hot boot could stop him. Given what he has shown in front of the big sticks, it would appear that it’s only bad luck that’ll stop him. He is nearly odds-on for the award at the moment.

A former winner in 2014, Hawkins is generally good for a behind a game, but with Jeremy Cameron also playing well he has some good competition for shots on goal.

Hawkins has scored a behind in 46 of his last 50 games which is an amazing strike rate demonstrating that he has been getting plenty of chances to continue this streak. I notice that he likes to make a sneaky lead to the pocket which is often rewarded but can easily bring up a major. His other go-to weapon is grabbing the ball out of the ruck with a throw-in close to goal and jamming it on the boot. Sometimes they go through but they can also be rather hit and miss. He provides a worthy adversary to the would-be Jetta King.

The Jetta is rarely claimed by a small forward, but it can be done. Stephen Milne was unlucky not to have claimed The Jetta in 2012 when he had a lapse in Round Seven, kicking 4.0 when he would have otherwise made it to Round 16 and taken the crown from Buddy Franklin that year.

Like the aforementioned Tip Rat Milne, the Cats’ small man in Stengle is always around the place trying to sniff out a shot at goal and seems to have a licence to unload a pot shot when no other obvious options present. He has cemented his spot in the Cats line-up with his third chance at AFL level and it would be great to see him continue this on and challenge the big guns in winning The Jetta.

Even rarer is a win by a midfielder and to have one in contention at this stage of the year is a little surprising. However, if there is one thing I have learnt about Christian Petracca, it’s that this man is capable of anything so we can not rule him out. Melbourne was in great Jetta form on the weekend kicking 9.22 as a combined unit and Petracca is someone they always look for and are often happy to hand off to when just outside the 50m arc. With Melbourne seemingly pencilled in for a win every week, he should continue to get good opportunities, I just worry that he may kick 3.0 instead of 1.2 one day soon.

Now, I have been following the winner of this since 1992 which is perhaps giving away my age a touch, but it was the first time I recognized the significance of how special it was. You see, 1992 was the last time in which a player was able to compete in every home and away match for the season and kick a behind in every game. The man achieving the feat was the Hawks’ champion full-forward, Jason Dunstall, who for the H&A season booted 139 goals and 84 behinds. Whilst he had one poor game in which he only managed 0.1, he also kicked at least one behind in every other game.

The only other player to do this was also a Hawk – Michael Moncrieff all the way back in 1976, who managed to continue the behind kicking streak into the finals for another three games – his 24-game behind kicking effort is an AFL record that may never be broken. Gary Ablett Snr came agonizingly close in 1994 when he had the full season in his grasp only to miss the last game of the year.

Now as we know the history of the AFL does not have a record of behinds kicked by individual players before 1966 so in 55 years just the two players have achieved this amazing feat, albeit a few have gone close with over a dozen other occasions a player has kicked behinds in 21 rounds of the season including recent efforts of Scott Lucas 2006, Matthew Pavlich 2007, Josh Kennedy 2015, and Lance Franklin 2016 & 2017.

In what is now named The Golden Jetta, achieving a behind in every Home and Away match for the season it would be truly amazing if one of the above-mentioned players in contention for the award this season could collect it, or some young forward of the future can put their hand up in coming seasons. I for one will be raising my glass to celebrate the achievement should it ever occur again.

A full history of The Jetta award winners

You can get more from Aaron over at http://www.uselessaflstats.com.au/