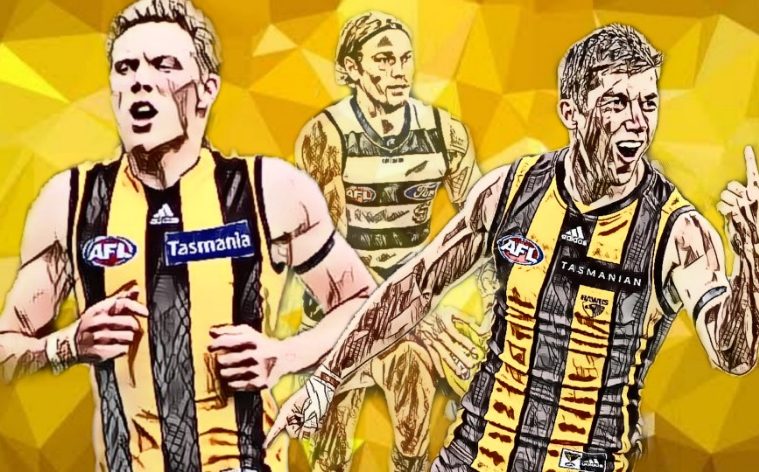 For a game that was controversial long before the bounce, one that was played under the scrutiny of a media public who weren’t sure if these teams should automatically get this Easter Monday game in the first place, and one between two teams fierce enough rivals that they’ve earned a curse named after them – did anyone expect that? Not the umpiring controversy, not the result, but the actual game of football between two teams?

Through the four rounds preceding Monday’s game, Hawthorn had flattered at times as a team who could kill you around the contest and in transition, but looked to run out of steam as games wore on – most notably in their Round Two demolition of Port Adelaide – and you’d be forgiven for seeing a pattern emerging as the second half loomed yesterday. You almost can’t start faster than Hawthorn did yesterday, three goals before Geelong recorded a touch, but the expectation was that Geelong’s nous and experience would win out.

Don’t get me wrong, it’s a big scalp and a big four points gained or lost, depending on your perspective. It was also a disastrous game of football, aesthetically. Not one for the purists.

Not a great day for either Hawkins or Cameron up forward for Geelong, and their combined six goals felt like it could’ve been eight or nine but for some basic skill errors. So too Tyson Stengle, who at one point tore off towards goal from the right forward pocket before kicking it out on the full. This occurred at a point of the game where Geelong needed the goal having conceded those early three or four. It’s a game where it felt like everyone was profligate with the ball – maybe owing to the weather, maybe owing to poor communication. Hard to say.

On that, the AFL recorded that both team’s disposal efficiencies were in the 72% bracket. Still, the AFL also record a kick of 40+ metres to a contest where the team has as many or more players an efficient disposal, so it’s a number you’d take with a grain of salt.

When I mentioned that Hawthorn looked like a team that had a tendency to flag as games wore on, it looked to happen again in the lead-in to halftime. Having spent the first half the better part of four goals in front, they went into the long break up just ten, and were behind just three minutes into the third term – not the ideal start to the half, following an ideal start to the previous half. It didn’t look like either team were doing anything differently, either, just that opportunities that were previously breaking Hawthorn’s way were now breaking Geelong’s, which is where you get to the game’s biggest (so far) talking point.

Up two, Tom Hawkins is fouled in the marking contest by Jiath maybe 45-50m out, and then sent to the goal square on a 50m paid for abuse. Hawkins summarily slotted it home, putting the Cats eight up, having kicked five goals straight, and seemingly on track to put the game away from Hawthorn.

It’s weird in retrospect and it was kinda weird at the time, that Geelong lose from here. They had the momentum, they were getting opportunities breaking (or just going) their way, however dubious they may seem (or have been, given that the free given was touch and go, which would’ve removed the hypothetical 50 from the conversation altogether)- and it just felt like Geelong win this.

It had a particular inevitability about it.

Almost up until the siren did this feel like, inevitably, Geelong would win. I’m not a student of behaviour enough to say that Geelong played like it, but on paper, on form, and on the fact they just kicked five consecutive goals, they’d be forgiven if they were playing like the win was already in the books. Problem is, Hawthorn wouldn’t let them win, and when the game got in the guts, Geelong couldn’t put it upon themselves to win.

In the fourth quarter, to lean on cliché, Hawthorn truly wanted it more. Geelong went fruitlessly forward, Gunston goaled to put the Hawks ahead, Geelong looked for all the world like they wouldn’t lose, Breust goaled, and then Hawthorn broke forward magnificently from a contest for Mitch Lewis to kick the sealer. That’s all she wrote.

In a metaphoric, game management sense. I’ve got more to write. First off, if it wasn’t clear in the above, it didn’t seem like either team won as much as both teams tried to lose and one team decided at the end of the match that this wasn’t, actually, part of their plan. The goals in the fourth quarter to get them back in it, from Mitchell, Gunston, and Breust felt like the team playing their greatest hits, drawing on big moments from players you’d expect to do the same. Mitch Lewis capping the game with his third felt similarly fitting.

Hawthorn’s game of playing fast at the contest is ostensibly possible due to their duo of million-dollar-men Jaeger O’Meara and Tom Mitchell- not the case. Jai Newcombe’s 31 disposals, 19 kicks (on a wet day) and 653m gained were central to all of what Hawthorn did well- while he was second to Mitchell for disposals, he contributed almost 300 more metres gained, for example. It’s a classic “standing up when it counts” type of performance, and one that made him look like a potential Rising Star smokey.

The other Hawks standout was James Sicily, who was everywhere. His defensive performance, reading of the ball in the air and subsequent intercept marking meant that he built the platform for Hawthorn to rebound off. That he had 10 marks by the second quarter meant that the team were able to build that lead while not conceding due to his sheer presence at the back. Given that so much of Geelong’s dominance plays off the success of their two bigs, Sicily’s game stymied much of that – claiming the intercept mark not only hurts Hawkins, but also cuts off supply to players like Stengle and Brad Close.

As briefly mentioned, Cameron, Hawkins, and Stengle combined for nine goals while still feeling like they had minimal impact on the game, itself, and I’m sure they’d each be kicking themselves for not doing more. None of them are going home and bemoaning that the team lost but for them doing their best. Part of that plays into the half-idea of arrogance – this is such a good squad who all had another gear to go up without getting there. 26 disposals for Selwood, 23 for Smith, 22 for Tuohy – three blokes who don’t need first names to describe them, such is their impact- but that’s just an average day out. Dangerfield a quiet 17, but a goal and a behind, meaning that their standout performer was the other ‘name’- Tom Stewart.

In a day where everyone seemed to play to their level and no one more, Stewart delivered a very casual nine intercept, 27 possession game where it seemed like he couldn’t put a foot wrong. He’s great to watch, as a player who is almost aggressively unhurried. Remiss also to not mention Mitch Duncan, who never plays himself off the screen but managed 12 score involvements.

Speaking of, remiss to not mention the man who grabbed the headlines (and wasn’t involved in the Tom Hawkins 50m penalty situation), four-goal man, Dylan Moore. Three goals by quarter time (the second, third and fifth of the game) as he couldn’t miss the big sticks and was a major part of Hawthorn’s early scoreboard dominance, faded away later in the match. Impressive performance on the balance but looked like it could be massive early.

Somehow, Easter Monday served up a game where Hawthorn showcased how they win games but also how they lose them. Geelong played like a team who already had a win secured but forgot to do the most important thing and play to secure it… and it’s impossible to know if anything we saw on Easter Monday actually serves for the rest of the competition. It was a game so rife with basic skill errors, but are there ramifications? Does beating the Cats mean Hawthorn are good, or Geelong bad, or anything at all? There are ramifications insofar as the ladder is concerned, of course, but did we learn anything?

Other than the pre-eminence of Jai Newcombe, maybe we didn’t.