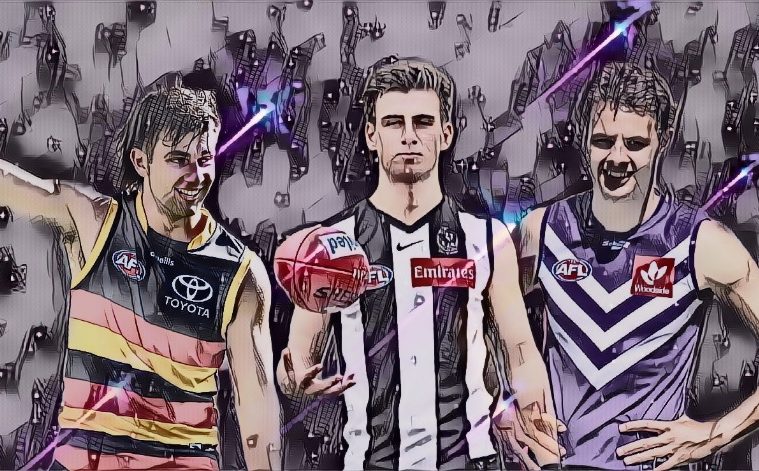 So here at the Mongrel, we’ve taken it upon ourselves to rectify another good AFL idea not quite reaching its potential, this time the Ron Evans Medal for the rising star. Last year we decided to rename it the creative ‘Mongrel Rising Star’ and anointed the Giants Tom Green our inaugural winner, we keep the same eligibility criteria as the official award, players cannot have played more than 10 senior matches or turned 21 before the start of the 2021 season. As always there are a myriad of fine contenders for this award from the highly-rated Jason Horne-Francis, Nick Daicos, Finn Callaghan, Josh’s Rachele, Sinn & Ward, and Tiger Gibcus, along with impressive Bomber Ben Hobbs. These talented kids from the Class of ’21 will have to contend with those still eligible who got a taste last year amongst them Oli Henry, Swans duo Logan McDonald and Braeden Campbell, Hawk bull Jai Newcombe and Demon premiership player Jake Bowey.

As per last year, we are adding our very unique magic mongrel secret herbs and spices formula is to the voting system, which presently involves seven assorted media dinosaurs desperately trying to remember the name of the top five most popular kids that Sportsbet have installed as favourite. Our system will see a 5,4,3,2,1 vote system applied each round and cumulative scoring with the winner crowned by finishing with the most points.

Of course, this doesn’t ensure our methodology is foolproof, but without being arrogant, we think we can do it a little better than the AFL. So, without further adieu (we’re also cultured speaking French, Gil would love that), here is the next instalment of vote-getters in the remarkably catchily named ‘Mongrel Rising Star’ award for 2022:

Players drafted with selections 1, 4, 5, 6 and 14 in their respective years feature in our highlighted players this week, alongside a second-rounder, a mid-season draftee and a player taken in the supplemental selection period. Highly touted and unanimous number 1 pick Jason Horne-Francis polls his first votes after inching closer since debut, a pair of Dockers continue to bring the energy and spark that have delivered their side to the top 4 and a consistent Magpie talent, Nick Daicos who is remarkably only four games into his career the stars in round 4. It is usually around this time the bite of AFL footy starts to catch the rookies and how they are able to fight through this and contribute as the season grows older is always a tantalising prospect, we’ll look on with great interest.

The Collingwood half-back flanker already looks like a 200-gamer, so assured with ball in hand and even more impressive finding the right options under pressure, you’d have sworn he must be of good stock the way he’s got that innate ability to make time slow down when he’s in the area. Despite a shock loss to the undermanned Eagles, Daicos was everywhere, collecting possessions at will (32 for the day) and progressing it forward 490 metres often into dangerous zones as he contributed to ten scoring chains, and was duly recognised with four coaches’ votes. There are a lot of very good players in the 2022 Mongrel Rising Star pool, right now it’s hard to see any of them usurping the son of a gun in this title race.

After saving the game in round 1 Chapman has gone from strength to strength, his ability to read the play and then launch attacks a critical part of coaches Longmuir & Graham’s game plan. 24 disposals delivered at the elite 88% efficiency stood out like a beacon on a night of poor skills, that he did it at both ends, four R50 and 3 I50 and as a result of 11 intercepts kept his team ahead of the ledger before the last quarter onslaught. Pleasingly for his coaches he was also involved in four one-percenters conclusively proving he is far from a one trick pony, this was also noticed by Leon Cameron as he was awarded eight coaches votes on the night. Looking like an absolute steal at pick 14 in 2020.

The second Docker to appear in this week’s list, O’Driscoll also caught the eye of the coaches to be awarded two votes to go along with his three from the Ol’ Mongrel. Having watched the former second-rounder closely this season his ability to handle the ball cleanly in congestion while running at pace has been exceptional and provides a weapon to counter defensive set ups. Twenty disposals achieved 452 metres, incidentally, the same number as Don Bradman’s highest First-class score, am I suggesting O’Driscoll is the next Don? Well, I’m not saying he isn’t, but his running also resulted in two majors from four shots on goal, for all of the mastery by the greatest batsman of all time, he never did that. Six tackles were also a great return as the young Freo players show an enthusiastic capacity to run both ways which will stand them in good stead as they come up against tougher challenges.

Was I a touch hasty proclaiming the SOMM (Son of the Macedonian Marvel) as the Mongrel Rising Star? Well, the kid with the designer Mullete certainly appears so based on the dynamic start to his career. Equal seventh on the Coleman table after another 3-goal game ahead of former winners, McKay, Franklin & Cameron is more than Stevie Nicks could’ve ever dreamed of at this embryonic stage of his development. Nineteen touches, nine marks, a goal assist and seven score involvements shows he is doing everything apart from dragging his team across the line in another heartbreaking loss. Three coaches votes suggests former Crow skipper, Rutten thought so too.

I realise the coach’s name is Matthew, but could you imagine if he was the beguiling wiccan voice of the seminal Fleetwood Mac?

Slowly finding his feet in the big league, JHF has already proven his mettle in the cauldron of centre clearance work, extracting the ball a further four times against a powerful Sydney midfield. His disposal though is holding him back from doing more damage and he’ll improve on the twenty-three touches at 60%efficiency. Five tackles and a goal assist topped off his best game to date in a vastly improved team effort against the Swans.

Jai Newcombe, the Hawks midfield bull was excellent on Sunday, one of the few players not allowing the Saints to have their own way. 23 disposals, six clearances including four from centre bounces, and seven score involvements would have surely had him in the votes again apart from a calamitous 10 turnovers that marked his output down behind a few others this week.

Nick Martin, the Bomber bargain has been listed in the top 8 rookies in all three games he has played in his fledgling career, this one he can count himself as unlucky not to poll again. 22 disposals, with 52% gained in the forward half led to five I50, eight score involvements, two direct goal assists and a 6-pointer himself to be a star in the Dons nail-biting win.

Braeden Campbell, originally bid on by the Hawks last year before the Swans snapped up their academy junior, probably struggled to find his groove straight away but has looked more comfortable in 2022 so far. Nine intercepts as part of his 21 touches, gaining 461m an impressive showing in their come from behind win over the Roos.