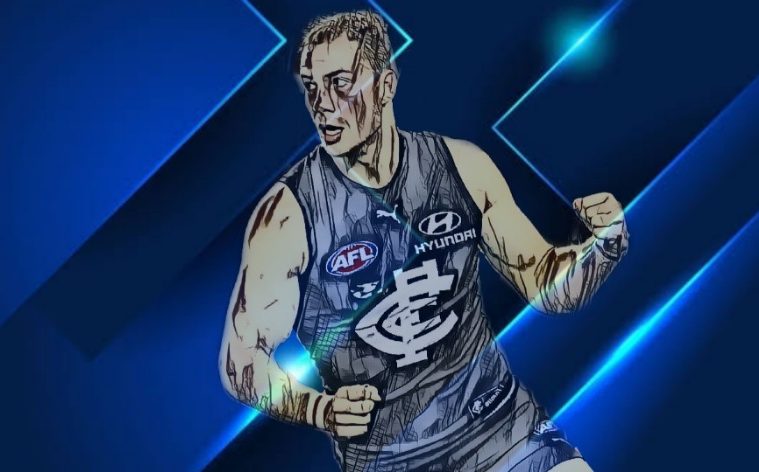 Over the last 15 years, there hasn’t been a less productive Coleman Medal winner than Harry McKay.

That’s not baiting, I promise. It’s measurable, and if he continues playing in the manner he did in 2021, it’ll lead to similar results as last year.

I’ve never found McKay to be a player to pass the eye-test. Part of that is due to the fact he plays like such a throwback. The kind assessment is the current assessment; he plays like a key forward from a foregone era. The less kind one is that he plays full forward like your local big unit, who everyone knows can kick a bag and do very little else. If he’s kicking goals, he’ll win the Coleman, but if he doesn’t do anything else is it possible for the team to win?

In contrast, over the last 15 years, the average Coleman medallist (disregarding McKay) has averaged 14.6, which is a marked difference. Even looking at something as basic as disposals, McKay’s at the bottom of the pack – and if you watch him play, he hates to be at the bottom of a pack.

It begs the question, what stats did he come out on top in?

Harry McKay delivered a historical season when it comes to scoring shots as a percentage of kicks. 81% of McKay’s kicks were scoring shots (not including any potential shots on goal that fell short or missed completely, so the number of attempts at goal may be even higher). This is a number that bears thinking about. 81% is insane.

Sure, kicking for goal that much is great, but the problem arises when you think about what he’s giving up by shooting for goal that much. He’s not doing anything else other than taking marks and kicking for goal. No contribution to build up play, barely any setup work for his teammates (he had 6.32 score involvements in 2021 and 4.8 of them were his own scores), because when Harry McKay gets the ball he is singularly bloody-minded. That ball is going in the goal direction.

The 81% stat is the one I found myself fixated on the most because it’s such an outlier. The next highest percentage was Buddy in 2008, with 65%. However, you’d think that was justified because he kicked 113 goals – more than double McKay – and still found a way to contribute in other ways. McKay averaged 9.74 disposals? Franklin averaged 9.57 scoring shots, six of which were in live-ball play.

Hawthorn, it’s worth noting, finished second that season. Franklin’s season is also an outlier because of course he kicked for goal that much, the formula worked and he kicked 113 goals. McKay’s 58 goals would’ve seen him ranked tenth that year, parked between Steven Milne and Daniel Motlop. To put it into context, it isn’t a particularly impressive goalscoring haul, yet it was accomplished by someone who was singularly focused on kicking the ball towards the goal and offering little to nothing else. For someone so one-dimensional, that dimension should have been better.

Generally speaking, the winner of the Coleman is on a team that’s successful. The team of the Coleman winner averages a sixth-place finish over the last 15 years, which includes a wooden spoon season for Fevola in 2006 and a 15th place for Jack Riewoldt in 2010. The average Coleman Medallist on a finals team, which amounts to 11 of the 15 years, resides in a top 4 team. Why is that?

There are three options I’ve come up with.

Option One – They’re surrounded by better talent than McKay. It’s easier to kick towards non-goal targets if those targets will kick goals, as well. Ostensibly, but if that was the case, then Fev and Riewoldt’s seasons would have similar numbers to McKay’s. This was not the case.

Option Two – This may be more Option 1A. Gravity – the player is good enough that it draws more opponents towards him, leaving other teammates open and allowing them to score due to the immense scoring threat posed by the Coleman Medallist. It’s harder to prove, but juicier.

Option Three – Players who are involved more in general play generally win more, which is the option that the numbers seem to favour.

Buddy, as he so often is, is the outlier here. That 2008 season destroys all numbers forever, because some of it was pure stat-padding and pieces of it can be used to credit each of those options. I try to not refer to it, just in the interest of parity.

The biggest team contributor on this list is Jarryd Roughead’s 2013 season. Of course, he’s still playing with Buddy at the time, and there’s nobody on Carlton’s roster with anywhere close to that one/two punch dynamism, but only 26% of his disposals and 41% of his kicks were scoring shots. His statistics are a tale of high disposals, not one of high goalscoring, and he still managed to bag 72 goals. Hawthorn also won the minor premiership. The two things feel related.

The other seasons where the Coleman Medalist also won the minor premiership – Buddy in ’14, Riewoldt in ’18 – tell similar stories. Riewoldt’s numbers are second on my list for scoring shots as percentages, behind Roughead’s, while Buddy’s are 5th. They speak to players who, in addition to kicking goals, did literally everything else, and their teams were better off for it.

What does this mean for Carlton’s season? In Charlie Curnow they have a second option – he might currently be in the middle of a purple patch, or this might be the player he now is – who looks to be able to shoulder some of McKay’s load. If McKay shares it, that is. Or decides he’ll kick to him at all, even a little bit. Maybe he tries a handpass once in a while? He does manage two per game when things get desperate.

I’m not attempting to say that the blueprint for Carlton making the finals is that McKay needs to kick for goal less, but to say that, historically, teams are better when their leading goalscorer involves themselves in general play more than McKay did when he picked up the Coleman last season. The numbers speak for themselves – he kicked for goal, relative to any other course of action, more than most players do any one thing in a game of AFL. He hasn’t taken a bounce since 2020. He’s never been a part of a team with a winning record. That 81% is such an outlier because the average is just over 50% and that’s only among players who also led the league in goalscoring, and they collectively averaged more goals and behinds than McKay did. With two exceptions, they were on better teams.

Can the Blues win with 2021 Harry McKay as their main weapon? Or do they need him to be more team-oriented to play finals in 2022? The data is there. Maybe Harry is the next statistical outlier, but those who ignore history and often doomed to repeat it.