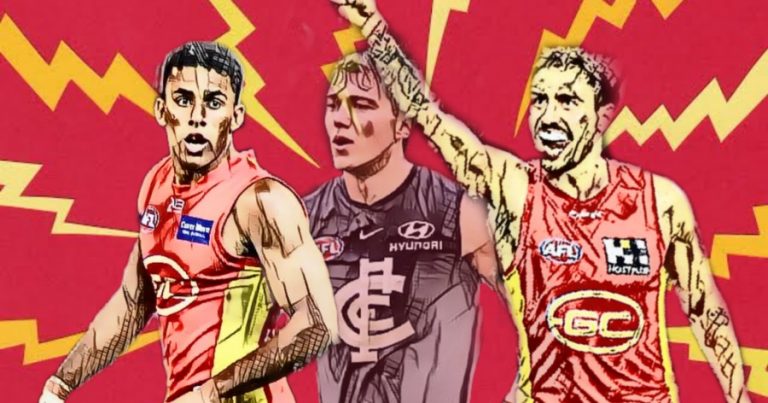 There were two very different stories coming into this game.

The Gold Coast Suns were smarting after a very disappointing showing against the GWS Giants last week. The Suns had started the season well with a win against the undermanned Eagles before having a really good crack at the reigning premiers. The loss to GWS caused a lot of people to reassess the Suns. Was it just a dirty day? Is this the start of the usual drop in form other than the odd competitive game, moving forward? If this is the drop-off, how long will Stuart Dew last?

Carlton, on the other hand, was walking on air. Three-zip to start the season including impressive wins over Richmond and the Western Bulldogs. They continued that form in the first half against Hawthorn, but then only just hung on for the win as the Hawks steamrolled back into the contest. The talk around Carlton had been around being a premiership fancy. “I think we can” was quickly becoming the most common phrase being uttered by Blues fans.

So, the storylines were written and it seemed that a lot of people had this game’s result pencilled in. However, as my tipping will tell you, not enough people recognise that interstate trips early in the year take a lot to win. And despite what you may think, a trip up to Metricon is no walk in the park. The Suns have really made a point about how they play at home and I would say they are at least a three-to-four goal better side up there.

But enough preamble. Let’s get into the stuff that mattered. And a quick warning to Carlton fans, this is very much all about Gold Coast, as no one else seems to like talking them up. If you want to hear about the Blues read the Herald Sun, they probably reported more on the Cripps injury than the actual game.

Carlton started this game hot. I’m not sure what the disposal count was, but it must’ve been something like 15-3 in the first few minutes.  Before the Suns knew what happened the Blues had two quick goals. Things did not look good for the Suns. Carlton has the propensity to roll momentum like an avalanche in a quarter of footy and kick long stretches of consecutive goals. But the ball went back to the middle and it was Witts, Rowell, Miller and Anderson in there for the Suns. I don’t know about Suns fans but I get some tingles in some familiar places seeing those four combine.

Witts will get his mention but I wanted to focus on Anderson. A quick look at the stats will tell you he had a lot of turnovers. But that’s what happens when you’re the guy digging in at the bottom of every stoppage and fighting through tackles to win the footy for your team. Particularly in the first few minutes, Anderson was the one driving the Suns. I feel Anderson has been somewhat forgotten by a lot of pundits with the focus on Rowell and Miller early in the season. But he put a few really good games together and has absolutely stamped himself as the fourth leg in the starting quartet for the Suns.

His name is Collins. Sam Collins. And if he played for almost any other club he would currently be put in the same category as the likes of Harris Andrews, Jeremy McGovern and Steven May.

Collins rotated pretty regularly with Charlie Ballard and swapped between the match-ups on Harry McKay and Charlie Curnow. Ballard played on the higher forward and Collins played on the deepest. Whoever Collins was on, was not given a sniff anywhere near their forward fifty.  I don’t believe either of the two key forwards kicked a goal while matched up on him. It was clear to see how effective Collins was with a perfect example of an elite defender at the other end in Jacob Weitering. If you check their numbers they are very similar in disposals, intercepts, spoils. The only significant difference between the two of them? Collins didn’t concede any goals. It’s a perfect comparison.

Collins has now done this consistently over the first month of the season and if he isn’t in contention for a Key Defender position post in your All-Australian team, then you’re not watching enough footy.

Docherty just keeps on keeping on. On a down day where plenty of his teammates were searching for touch and a bit of feeling for this game, Docherty continued to display the reasons why he was made captain before being cruelly cut down by injury. I would hate to think how this game would have gone if he wasn’t out there. Whether it was working hard with eh footy or rolling off his man to support, Docherty played like he was in a winning team when his teammates seemed to forget that they were meant to be good this year.

Jarrod Witts must’ve felt like a very expensive butler at halftime walking around in the changerooms in an expensive tuxedo asking his midfielders if the service was sufficient. Not since Alfred in Batman has a man so dutifully provided such service. Although if the Suns had put up a bat signal at Metricon, it would be interesting to see which player would emerge as the caped crusader, as I think Witts would give it a fair shake.

At halftime he already had 15 hit outs to advantage. Not to mention the times he had simply grabbed the ball out of the ruck and fed a handball to teammate, with complete disdain for whoever happened to be opposed to him.The late withdrawal of Pittonet severely hampered Carlton’s ability to compete in the midfield. Witts did exactly what you want your big ruckman to do. He saw the opposition’s best wasn’t out there and duly dominated this game and gave control of it to his team. It was clinical.

This kid can play. Whether it’s the miraculous shots at goal that somehow go through the big sticks, or some fancy footwork on the flank to get around a couple of opponents, Rosas was doing a hell of a lot right out there.  I also thought some of his defensive efforts were really telling. Considering he is likely to keep Alex Sexton out of the team, which I understand Suns fans have mixed feelings about, he’s going to have to ensure he keeps performing. However, I wouldn’t be looking for anything different than what he just delivered.

Williams had the ball on the string in Carltons defensive fifty. Yes, he did take a few kick-ins, but someone has to do it. Williams was very good. Eight intercepts, 11 rebound 50’s and 800 metres gained. The guy kicked the footy 31 times in a game of football. That is no mean feat. It’s not Bob Skilton’s record 44 against St Kilda in 1967 and I am absolutely no stats expert, but I’ve found only Gary Ablett and Dane Swan have matched this output in recent years, and they had 53 and 49 disposals respectively on those days.

A man that can divide opinions. That is Marbior Chol. However, Chol is comfortably delivering everything the Suns would’ve wanted if you asked them at the beginning of the season. He is leading the Suns’ goal kicking in 2022. He’s averaging 10 hit-outs per game, and generally seems to bob up for at least one quarter in each game and have a purple patch where he takes some big grabs and kicks a couple of goals.

In this game, it was in the third quarter. It was early in the quarter I know, but the second effort to take the mark that led to his second goal of the match was great. The ball is skied by a blues defender and there are a couple players under it. Chol immediately realises he can get there and works the required 15 or so metres and launches. He comes down with it. He tries to be unselfish but gets the reward from a 50-metre penalty off the ball. I just thought it was good to see Chol looking a little low on energy after his first couple of efforts in that original contest, and then being able to push across for the next one. It’s a sign Suns fans will love to see.

When Life Gives you Lemmens

Sean Lemmens had a moment to forget in the first quarter. Lemmens performed the definition of a coach killing play when he one-step kicked a short pass in defence, directly in front of goal. He completely missed the target and handed the blues an easy goal on turnover. This was particularly disappointing for this Mongrel as I had just finished writing a wrap of his previously play, where he exited the footy out of defensive fifty and followed up for another kick, which was the best skills that had been on display so far in the game.

Will Powell had one hell of a minute late in the third quarter. First, he rolled his ankle as he contested a long ball on the wing, which always is a bit of stinger in the moment. He gets attended to by the trainer as the ball is contested nearby. The ball spills wide and he decides to intervene and leaps up and smashes the ball over the boundary and away from his opponent. A job well done. Now he can rest? Nope. The umpire calls it deliberate (which it technically was) and he stands the mark as Carlton goes long inside fifty.Then the ball comes back out, back to Powell’s wing. He gathers the ball and drives it deep inside the Suns forward fifty, out in front of Izak Rankine who runs on and kicks a goal. So, he went from being seen by the trainer to a goal assist, which was against the run of play at that time. I thought it was noteworthy.

A lot of credit can be given to Carlton for their defensive pressure in this game. They were beaten around the ball but refused to let the Suns get away easily. However, they didn’t take their chances, particularly a couple in the third quarter and the Suns steadied to hold on for a very good win.Both of the discussions around these team will flip this week. The Blues now sit 3-1 look a little wounded with Cripps being subbed out and a lack of competitive ruck depth without Pittonet to carry the load. Top that off with facing off against the desperate Port Adelaide, who I think would just about run over their grandma to get a win at the moment.

It will be very telling if the Blues can’t steady the ship this week.Gold Coast move to 2-2 with a strong showing against the undefeated Demons. They travel to Marvel to face against a rampaging St. Kilda who has shown themselves to be a very fun team to watch with their daring and attacking style of footy. It will be a tough one.