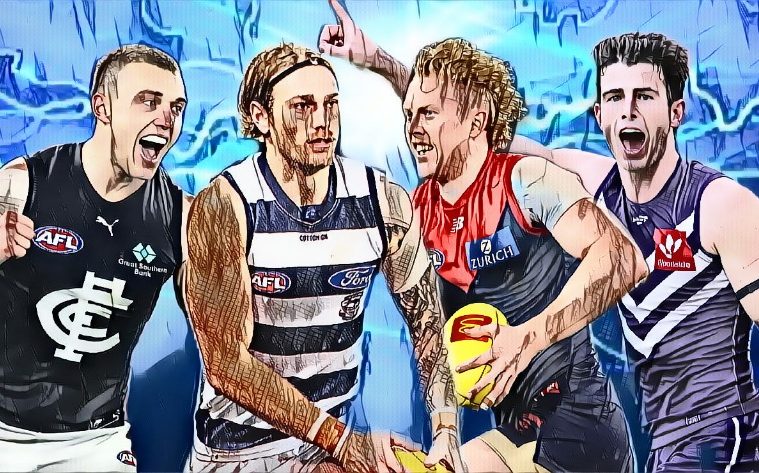 Mongrel of the Year – Round Three Results

Throwing its black hat into the ring alongside the Brownlow, Leigh Matthews Trophy and AFLCA Award as the most prestigious individual award in the game. The Mongrel of the Year award is back bigger than ever with a regular Thursday slot to recognise last week’s heroes.

Using the superior 5-4-3-2-1 configuration to recognise the most important and best player each game, the Mongrel will keep a running tally through the year as well tip its aforementioned lid to the stars each round. Round 1 started with a bang as some of the biggest names in the game, Petracca, Dangerfield, Cripps and Rowell flexed their considerable muscle on the competition, the race is on in earnest to the crown.

Back to his zippy best after a tumultuous start to the season Lachie Hunter was best afield in the round opener, collecting his 28 disposals at will, a huge improvement on 18 and 13 in this previous two outings. What impressed most was his ability to influence in all areas of the ground, whether it was his four clearances or three each I50s and R50s he was a constant thorn in the side of a Sydney side who just couldn’t get going. Maligned Bulldogs ruckman, Tim English also played his best game of the season, and potentially of his career as he led the game with 28 hit outs, 12 score involvements and eight clearances. All career-highs apart from taps. A mature and imposing English could be the missing link of another fairytale September for the Dogs.

There used to be an ancient proverb, first muttered by Confucius in the 1970’s “If Lillee don’t get you, Thommo must”, the modern adaptation could very well replace the Demons superstar midfield pairing with the tearaway Aussie quicks. Petracca was unusually quiet in this one, perhaps slowed down by a knee issue but Clarry put in a monster performance to drive his team to victory. Leading all-comers on the ground in possessions (38), contested possessions (18), Metres gained (666), Inside 50s (15), Score involvements (9), clearances (8) and direct goal assists (3), this was as close to the perfect game as you’ll witness. Angus Brayshaw also sprung to life recording 20 marks as he roamed unmarked up and down the MCG wings all night, recording the highest tally in that category since 2016, he is proving a man of many talents in this all-conquering Melbourne side, revigorated after a down 2020 but concerningly out of contract.

You could make a compelling argument that former Swan Jordan Dawson deserved five votes just for his match winning goal after the siren, in a showdown no less. However, that would be underrating his performance across four quarters, as he displayed a harder edge to compliment his gut running and long kicking to win 24 touches, making great use of that fearsome left boot to kick two long goals, including the matchwinner and having another controversially disallowed with plenty of doubt as to whether the correct call was made. In a week of maligned big men, both Todd Marshall and Elliot Himmelberg stood tall for their respective teams with five and four goals straight. With plenty of questions about key spearheads Dixon and Walker missing, the coaches deserve some praise for persisting with these talented talls.

With Josh Kelly and Toby Greene added to the Giants captaincy in the off-season many predicted the continued demise of the incumbent, Stephen Coniglio, but instead, a renewed Cogs has benefitted from an uninterrupted pre-season and hit the ground running. Solid outings in rounds 1 & 2 indicated his best wasn’t far away and it was unleashed on the lowly Suns, ten clearances and 32 disposals monstering the overwhelmed Gold Coast mids and with some slightly greater accuracy at goal his match might be described as a masterpiece. The inaugural Mongrel Rising Star Tom Green has picked up where he left off last year with three stunning games to date culminating in a massive twenty-nine touches and two goals, displaying his full toolkit as a double threat up forward as well.

What Chris Scott wouldn’t have given to have his defensive cornerstone available last September, but while that was not to be, season 2022 looks again like an AA calibre one for Tom Stewart. Integral in their first half form and then in the last quarter comeback, Stewart patrolled the backline intercepting the ball 13 times, his metres gained tally more than 50% higher than anyone else on the ground as his relentless forward pursuit drove his team to victory. Jeremy Cameron scored a timely six goals, three in a withering final term as his Cats came storming over the top of a Collingwood side that felt they had done enough to three-quarter time. If Geelong are to get over that final hurdle in the last weeks of the season, they’ll need Cameron fit and firing, because at his best he is probably the most potent goal scorer in the game.

You could have summarised Brisbane’s 22-player output with the old little league reporting, “good team effort” – but we’ve got a prestigious medal to award here, and so further investigation was required, and while plenty of maroon and blue hands went up, the player most influential when the game was still a contest was their superstar in waiting, Zac Bailey. The livewire forward tore up the Woolloongabba turf, with eleven of his seventeen disposals resulting in a score involvement among four goals he kicked himself on the night. Former bulldog, Marcus Adams polled in his third game of the year and is a tremendous foil to Harris Andrews in the key defensive post. Five intercept marks, three of which were contested highlighted his evening, but the seventeen disposals at 94% efficiency led to numerous goal scoring opportunities further afield.

The Blues skipper has been officially unleashed, streaking to a perfect 15 votes after three games, his presence and brutal attack too much for the young Hawk mids early on as Carlton compiled a match-winning lead. 31 touches, 11 tackles and again hitting the scoreboard had him a standout in the thrilling one-point win. Equally impressive was injury-riddled Charlie Curnow’s continued form, his five contested marks giving the Hawks defence nightmares and he converted neatly to score three goals. For the Hawks budding superstar Jiath was breathtaking in the air and spellbinding on the ground as his athleticism turned the Blues attacks into lightning counters in the blink of an eye. 27 touches and ten intercepts in a typically eye-catching performance.

The former crow Brad Crouch was tenacious against a willing Tiger opposition, scrapping for 11 clearances and nine tackles to go alongside his goal and twenty-nine disposals in a fine outing for his club. Ben King rocketed up the Coleman leader board with another four goals, all in the final stanza as he displayed all of his footballing gifts, rendering the Richmond defence helpless as he plucked the ball from high in the air, gathered the ball on the ground and outran his opponents to find space through work ethic and desire. Nathan Broad would’ve put a smile on his coaches face in the review, polling votes for the second successive game and perhaps leading the Jack Dyer medal at this early stage of the year.

Despite another heavy defeat, Eagles champion Jeremy McGovern stood resolute in defence as he has done many times before. His fifteen intercept disposals including four contested marks as he and past skipper Hurn did their best to limit the damage. Lachie Schultz’s star continues to rise as he adds class to his fierce determination. Three tackles inside forward fifty resulted in two goals and three goal assists for the fleet of foot Docker forward.  It was also pleasing to see Will Brodie amongst the votes, another ex-Sun seemingly destined for bigger things after leaving the Gold Coast, his big body responsible for eight clearances and five tackles as the Dockers controlled the stoppages and doubled their opponent’s score.