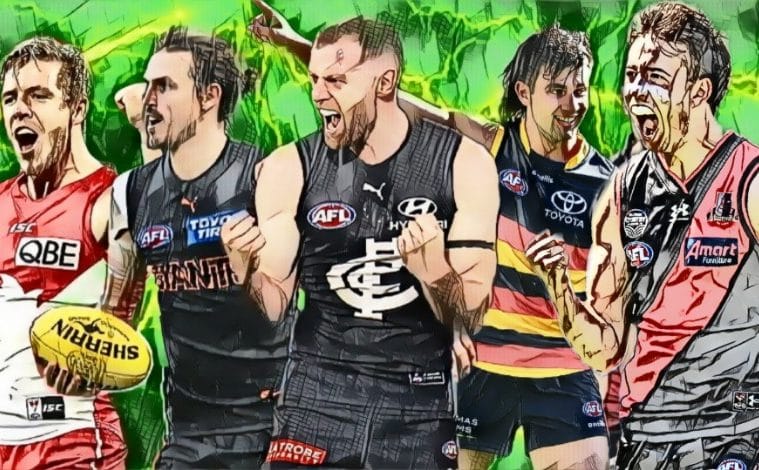 The Heroes and Zeroes of Round One

If I told you I’d been looking forward to writing this since last Wednesday, would you call me a liar?

Would you call me crazy?

Look, I don’t care, just as long as you call me.

Every week during last season, I found myself sitting back in the afterglow, thinking about which players, or sometimes others, won the round of footy. I mean, it would be easy to look at the scoreline and ladder and name whichever team won as the winners… but that’s a but too simple for an old bloke like me. I like to explore, to hunt around a little, to find something a little extra in the weekend’s round of footy to sink my teeth into.

And thus, the Heroes and Zeroes of Round One column is ready to go.

Each week, The Mongrel will have his eye out for which players, coaches, or AFL personalities benefited most from the round of footy we just concluded. Which players performed above expectation, or did something special to capture the imagination of the footy public?

Aaaand then there’s the flip side. Which players failed to impress? Who couldn’t get the job done or disappointed on the big stage?

Ten of the best, five of the worst,  but feel free to add your own.

Personally, he could have come out, fell over his own feet at the first bounce, did the involuntary splits and tore his pants and I would still be proclaiming the return to footy from Sam Docherty as the biggest win of Round One.

It turns out there was way more to it than that, with the former skipper of the Blues embracing a signature moment (with a great 50 metre assist from Tom Lynch) to slot through a long goal and have the entire Carlton team come to celebrate with him.

I don’t care who you support, how much you hate Carton, or whether you are an unfeeling jerk, everyone who loves the game should have been watching Sam Docherty’s return to footy with a massive smile on their faces. Congrats, Doc.

Now… let’s get Ben Cunnington back out there, too.

Couldn’t get a run in the Bulldogs midfield, and I guess that is understandable considering the vast array of talent the Dogs have in the roles, but given the opportunity at Collingwood, Patrick Lipinski grabbed it with both hands and shook the life out of it.

He carried his preseason form into the real stuff, notching 30 touches and slotting a goal as the new-look Magpies fired a warning shot over the bow of the competition. Reports of their demise may have been premature, and with additions like Pat Lipinski, Collingwood is far from a team that many thought would contend for a bottom four spot.

Another notch on the belt when it comes to lining up on the greatest forward of his generation.

No, that doesn’t mean he had sex with Lance Franklin (I hope) – it means that Phil Davis played the Glenn Jakovich role to Buddy’s Wayne Carey. People, if you can find some of their previous encounters, go back and have a look. Their 2018 Elimination Final encounter was similar to this one… and Davis whacked him in that game, too.

Time to give Davis the respect he deserves – many wrote him off last year, but he was fan-bloody-tastic in this game. You’d think the boys from On the Couch could have given him ten seconds of their time to acknowledge his performance

With Franklin down and beaten by Davis, the Swans needed someone to step up, and once again it was Luke Parker putting the team on his back and kicking five huge goals to get his Swans over the line.

Parker is one of the more underrated mids in the game when it comes to his work up forward. Hell, we hear all this talk about Nat Fyfe going forward and kicking goals – Parker has slotted 20+ goals in a season four times. Fyfe has done it once.

With the Sydney midfield growing and blossoming before our eyes, there is a second career awaiting Parker up forward and he might just surprise some teams with just how potent he is in front of the big sticks. He shouldn’t – they should know – but he will, because their attention is on blokes like Fyfe who have promised it but never actually delivered.

Welcome to the big league, Nic… this is pretty easy, isn’t it?

Five goals on debut in a side that was pummeled… it deserves some love, and Martin got it with the Round One Rising Star nod. I watched him in the preseason games, including the Bombers intraclub clash, and he looked wonderful. I am genuinely pleased that he was a) able to pick up a list spot, b) make the team for Round One, and c) fly like an eagle whilst being surrounded by a bunch of turkeys.

Guys, it wasn’t just that Rachele got out to kick five goals, although that would be impressive in and of itself. No, it was how dangerous he was around the footy at all times. He continually managed to find space inside 50, lost his man in traffic, looked dangerous at stoppages and probably could have kicked seven with the opportunities afforded him.

There was a buzz around this kid before the season. He looked polished in the practice games and some were already predicting he’d be the Rising Star before he played a game. Makes those people look like geniuses right about now…

Can we say his performance was Patrick Cripps-like?

I’ll say it – it definitely was. From the way he stood in tackles, to the way he burrowed in and won contested footy, to the way he picked up nine clearances, everything about the game of Matt Rowell told us that he had well and truly put the last season and a half behind him.

He looks trimmer, better-defined, and seemed bloody powerful in the contest. He had the most contested possessions of the week (22) and continuously fed his fellow mids after doing the tough stuff. I know he was never really gone, but welcome back anyway, Matt.

Are we making too much of one spoil late in the game?

I don’t think so. If it were a shot at goal that won the game for a team, we’d be leaving puddles in our chairs with excitement, but because it was a spoil, people aren;t that into it?

Get into it, people – it was a ripper!

There was so much that could have gone wrong had Heath Chapman not been perfect in that moment. Had he been knocked, he could have missed the footy, entirely. Had he not connected sweetly, it could have skimmed off his fist, traveled through the goals and tied the game up, and had he not landed well and followed up, the Crows may have still been in with a chance.

But he did do everything perfectly, including the follow up. It was fitting that he was tearing out of defence as the siren rang to declare his team the winners, but the real winner on the day was Heath Chapman.

So, the Saints were looking for a lift in their game against the Pies.They had plenty who COULD provide it, but it took a bloke in his first game to actually do it.

That’s both great and a real worry from where I sit, but the positive was how well Hayes took to the big stage of Friday night footy, attacked the contest, took marks, kicked goals and was the catalyst for the Saints getting close to the Pies.

Not Membrey, not Marshall, not Hill, not King… Jack F’n Hayes! 18 touches and three goals from a big fella on debut… not sure you could ask for much more.

I tossed a few names around for this last spot – Gunston, Sicily, Daniher, Petracca… I settled on Patrick Cripps.

There was a point last season where Cripps looked shot. There were no second efforts, there was no defensive run, and when he hit the deck in a pack, he was always the last to get up, as though the effort was almost too much.

However, whatever he has done this offseason has seen Cripps hit the ground running in Round One. He smashed the Tigers in tight, picking up eight clearances and dragging players along with him as they tried to bring him down. I know one game does not make a season, but if you’re anything but excited about about what you saw from the Carlton champ in Round One, I think you may be beyond help.

Made some pretty significant errors in the Grand Final rematch. Dropped marks and made an unbelievably poor decision to play on (even worse than Joe Daniher’s) to cost the Dogs two goals. If he had his head screwed on right and started attacking the contests with intent, the result in this game may have been a bit closer.

Looked great in the preseason, racking up touches with aplomb, but once the real stuff commenced, his hamstring lasted a quarter and a half.

Prestia is the engine room of the Tigers. What he provides cannot be duplicated by anyone else on the team. My hope is that once he works back, he gets a clear run at it, because without him, I am not sure the Tigers have the consistent midfield grunt required.

You reckon the Pies regret trading him yet? That’s what he wanted, right – to make them sorry they traded him?

He has fallen so far from the level he was at in his 38-goal rookie season and looks tentative whenever he approaches the footy. The talent is there – it has been obvious since day one – but talent alone is not enough. When was the last time you saw him use that blistering pace to get out the back? Remember when he used to do that?

To be completely honest, I am not sure I’ve seen it since he landed at North, and I am pretty sure I didn’t see much of it in 2020, either.

I don’t know about you guys, but when I watch a game of footy, I don’t want to hear the play-by-play bloke barracking for something just so he can have his voice on the call when something special happens. Russell was painful in his efforts to call the Sydney versus GWS game, almost pleading for free kicks for Franklin.

Sorry Dwayne… looks like the A-team get the shot at calling Buddy’s 1000th goal… but you did all you could to make it happen.

People in glass houses should not throw stones.

Let’s leave it at that.