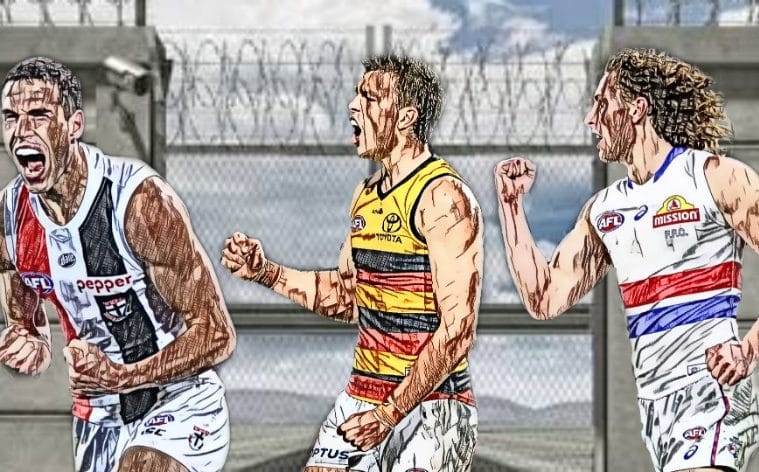 The “Get Out Of Jail” Mark – Round One

Of course, marks inside 50 reign supreme. They result in a shot at goal and can inflict maximum damage on an opposition, but there is another type of mark that often goes unheralded that I rate pretty highly. I call it the “ Get out of Jail” mark, or “GooJ”  mark for short.

Sounds dumb, right? Well, the other option was to call it the “Bail Out” mark… or the “BO” mark. But that makes it sound like it stinks, so GooJ mark it is.

Firstly, a little description as to what constitutes a GooJ mark.

Why is the GooJ mark so important?

I’m glad I asked. You see, this is the mark that breaks the game open. How many times have you seen a team trapped inside their defensive fifty, hammering the ball out, only for the defensive press of the opposition to build the wall, intercept, and pump it back inside the attacking zone with interest?

Repeat inside fifties kill defences, but one GooJ mark not only releases the pressure, but can get the team up and running, changing momentum as the entire group of mids, half-backs, and half-forwards all have to get on the move. It gives a team under fire a chance to go on the offence.

My plan is to chart the best exponents of this aspect of the game all season, with the intention of identifying the players that give their teams the best possible avenue to exit defensive fifty, clunk grabs to relieve the pressure, and work the ball down the wing when short passing avenues are closed off.

Note – This will be a members column ongoing, but for the first one, to give you guys a bit of a taster, I am opening up the Round One results to all.

Here are the players that took the big “GooJ” marks in Round One. These will go into a table for you guys over the next week.

Over the next few weeks, I expect the big men to really start standing up and putting some distance between themselves and the smaller guys. It is easy to take one here and there, but to provide a marking target as the GooJ option is not something little blokes will do all that often.

Interestingly, of the seven players that managed to drag in two GooJ marks this week, all but one were rucks or key position players. Tim Taranto is the outlier. Let’s see how he goes in Round Two.

This will become more expansive as the season progresses, with Round-by-Round updates highlighting which players made a difference and who couldn’t get it done.

As an aside, Aaron Naughton could have probably been out in the lead by himself, but had a third GooJ mark taken off him due to his teammate attempting a block in the marking contest. Hell, I would have backed Naughton to take the grab regardless, given the way he was attacking the footy. And yes, I watched every game to compile these – I have no life.