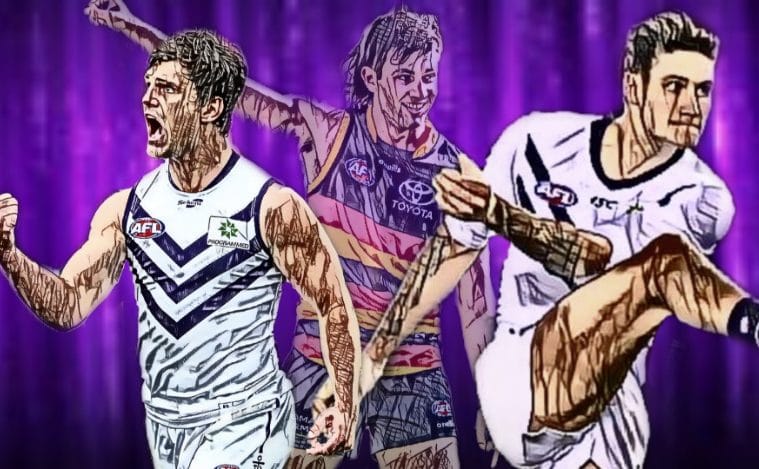 In a game largely overlooked by the wider football public in this opening round bonanza, the Adelaide Crows hosted the Fremantle Dockers in a Sunday afternoon fixture at the Adelaide Oval, the day after the South Australian State Election where the state welcomed a new government.

This game was really only mentioned when commentators were discussing the players that wouldn’t be playing. Whether it was Fyfe, Darcy, Taberner and Wilson for Fremantle, or Walker, Laird and Seedsman for Adelaide. Not much was made of the players actually participating in the match. So, the remaining players arrived at Adelaide Oval to start their respective season on a hot and sunny (31 bloody degrees Celsius) day in the South Australian capital, the day after it delivered a landslide loss to its previous government in its state election.

Both teams also had some new players they were looking to flaunt. The Crows had Josh Rachele, the number six pick from last year’s draft, Jordan Dawson who crossed from the Sydney Swans (highly underrated) and Jake Soligo (The Crows second Pick from the 2021 draft) was also making his debut. They also had a pretty handy player returning from an extended injury break, in Matt Crouch.

Fremantle, well they had Jordan Clark come across from the Cats after deciding he wanted to play back home in WA. The Dockers also had former Gold Coast Suns player Will Brodie lining up after joining the club.

Let’s get stuck into this match and the stuff that mattered.

Let’s start with the biggest moment of the match. Ben Keays snaps the ball at goal in the dying seconds of the match. The ball is on target and heading to a contest on the goal line, oh yeah, the score is 82-83 in the Dockers’ favour. I’m not overly familiar with Heath Chapman, but in that moment he might as well have been Matthew Scarlett, such was his composure and ability to win the most critical of contests. Sure, it’s easy to sit back on our lounge room couches and say “of course you punch the ball back into play and clear it”, it’s not so easy after you’ve busted your gut for a few hours and are being pushed across the goal line by your opponent.

It was great control by the Dockers defender and then to also have the awareness to also follow up his good spoil, by getting back into the field of play and getting that ball the hell out of there. Quality defending that saved the win for the Dockers in this match.

Do you think Ben Keays got a little bit triggered by all the talk around players missing from this game? In my mind he did. Keays dominated this game in a way that, if someone like Fyfe had’ve had his numbers, the AFL media would be swooning over his performance the whole week.

Keays looked like he was operating with more time than other players out on the ground, which is the hallmark of a player operating at a higher level. When Adelaide were searching for a hero coming out after halftime, Keays was the instigator in the middle. He had a stack of the footy and was the one delivering it inside 50 to will his team back into the contest.

And then, in the dying seconds of the match, it was Keays with ball in hand throwing the ball on his left boot for a last gasp shot at goal from a forward 50 stoppage. A shot that was on target and had the distance, if not for Chapman’s spoil. Keays was that close to being the hero of the round…

Gee, there have been some big debuts this week.

Jack Hayes, Nick Daicos and Nic Martin are a few notable ones. However, Josh Rachele may have eclipsed them all with his stirring five-goal performance in this match. It’s not often a player comes in for his first game and instantly becomes his team’s most important player inside forward 50 (for this match anyway). If you watch the replay of this game you will find that there was actually a couple more times, particularly in the last quarter, where his teammates simply missed him wide open in the attacking 50, instead opting to bomb it longer.

And it isn’t just about the numbers either. His goals had serious impact. He kicked one early against the flow in the first quarter. He kicked his second in the shadows of the halftime siren to try and keep the Crows in touching distance. He then kicked two in a purple patch in the third, including a steady set shot to put his team in front for the first time in the match. He then kicked the Crows only goal for the last quarter. Impact. Yes, the others played seriously good games, but in terms of impact on his team’s fortunes and the result, I’ve got Rachele in front. It was a special debut to witness.

Brayshaw was the bull of this game. It’s hard to believe he is only 22, when he plays like a 28-year-old. Brayshaw was comfortably the Dockers’ best player. He led the Dockers in the disposals and score involvements and led the match in centre clearances, tackles and inside 50’s. Brayshaw connected well with Serong and Mundy as the headline of what ended up being a thin midfield rotation.

Seven minutes left in third quarter. Scores level. Adelaide had kicked the first five goals of the quarter. Fremantle’s Michael Frederick stepped around one player inside forward 50 and looked set to steady up and snap a comfortable goal from 15-meters out on a 45-degree angle. This would put the Dockers back in front and potentially steady the ship.

Enter Brodie Smith, with an inspirational smother.  Sure, the Crows may not have won the game, but Smith’s efforts deserve recognition. That’s the sort of stuff that lifts every teammate around you.

Speaking of lifting people around you. I grimaced as if I had been hit myself when McHenry found himself at the front and then bottom of a pack being split by Darcy Fogarty early in the first quarter. Not to be defeated, McHenry gathered himself on the ground and shot straight back up in what can only be described as significant pain. Not only did his teammates lift, but the entire outer wing of the crowd did also, in their show of support for his courage.

No Fyfe and no Cerra, Serong still delivers. He needed to perform in this game if the Dockers were going to cover the gaping holes left by two of the best midfielders, and he did just that.

Don’t sleep on this guy. Showed some signs of becoming a serious key position defender with some powerful impacts on important contests in this match. Yes, it wasn’t as if he was matched up Tom Hawkins or Jeremy Cameron, but this is AFL footy and he still had plenty to contend with in Treacy and Lobb, and more than held his own. And don’t forget that large parts of this match (particularly the first half) were played on Fremantle’s terms before Adelaide found their mojo.

An interesting game from Lobb. Some poor moments and some inaccurate kicking, but he also played his role in getting the Dockers over the line. Did give some scoring opportunities away as well and still finished with two goals.

Looked to be one of the few Crows players who turned up to this game at the start of it, instead of after halftime with everyone else. Perfect game from a small forward in this one.

Mixed bag form Clark in this one. Kicked a goal, ran hard and had some really good patches. However, he countered that with some poor dropped marks, some errant bounces and getting pushed off the footy far too easily a couple of times.

I liked Switkowski in this game. Much like Rowe for the Crows, he was a real livewire for the Dockers. He had some crucial efforts in the last quarter which ended up being a huge part of the Dockers’ ability to kick enough goals to snatch the victory. That effort on the wing, where he managed to pull off a couple sidesteps and a spin to draw in three Adelaide opponents in very little space was special. Talk about creating space out of nothing.

Quiet game from Ryan in this one, in a game where the Dockers needed leadership from their best players. This was exacerbated by the fact that the Crows small forwards in Rachele and Rowe were the ones doing the damage.

Really expected more from O’Brien in this game. Coming up against an inexperienced ruck duo, I was looking for him to really exert his influence. He benefited from a few free kicks, but overall I thought he was capable of much more.

This game was absolutely fantastic! A game where both teams looked to score and attack the footy aggressively. Fremantle held sway early and the game was played other terms, but Adelaide hung around long enough that when they fixed a few things up after halftime they were within striking distance. I must say it was a refreshing interview with Crows coach Matthew Nicks at halftime. I think he described their disposal as “putrid” or something similar. It was a very apt assessment. But that’s also round one. Teams can be a bit sloppy in their first genuine match in six months. Crows’ fans should be buoyed by the way their team rallied.

Both teams really deserved a win, but you have to give credit to Fremantle. They’re one of my two tips to rise this year, and this was simply a game they had to win, regardless of injuries, if they were planning on not booking a late August holiday.