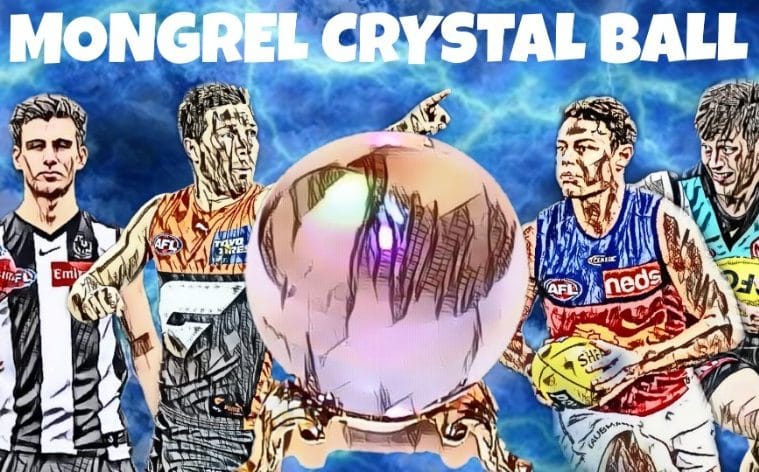 We’ve read the predictions of the best – now it’s time to read those of the rest!

As we like to poke fun at the experts (some of who are highly-paid) who trot out wild predictions, what type of hypocrites would we be if we didn’t do the same and wear the criticism?

Personally, I thought we’d be the coolest type, but the other blokes disagreed. And so, here we are, ready to put our collective knowledge (and wild guessing ability) to the test.

Here are The Mongrel team predictions for 2022… which may or may not be edited at some point during the season to save face. Just kidding – I had someone send me screenshots last year… can’t get away with that stuff, anymore.

Wow… I wasn’t the only one thinking the Lions are cherry ripe this season, huh? Equal top with the Dees to repeat.

Bloody Geelong tragic, The Slugger, is still holding out for the Cats to make one last run.

The Lions very popular again, with five people selecting them as the runner-up team. That makes nine in total out of 11 that think Brisbane will make the Grand Final.

Eight of the 11 think the Dees will be in the last game of the season, as well. Hodgey likes the Swans after what they showed in 2021 – can’t say I blame him.

How the mighty have fallen…

The Hawks are in rebuild mode, with six of the 11 writers selecting them to bottom out in 2022. Interestingly, no one has selected last year’s cellar dwellers to go back-to-back.

THE DOC – RICHMOND (12th to outside top four)

It appears as though The Mongrel Team believe the Tigers needed a bit of a rest after their extended run at the top. Finishing 12th last season, most of us think Richmond will be making some noise in 2022.

JB Eddy loves his Kangaroos, whilst HB and Tim Hunt like what they see at Freo, and The Slugger has jumped on the Blues. He loves taking a risk.

The Eagles are the popular pick here, with seven selections as the biggest drop-off in 2022. Their off-season injury list, compounded by a horrible first practice match against the Dockers, has seen faith slip.

I do love that Dan couldn’t bring himself to state the Eagles are going to fall heavily. Loyalty…

Who will finish top-three in the Brownlow?

LOL – just about all midfielders, with Hodgey thinking the hybrid forward/mid role of Heeney might be enough to win the umps over.

And, of course, Matt O has continued his one-sided love affair with Zak Butters. On preseason form, he may not be far wrong.

Glad to see I (HB) wasn’t the only one thinking Joe Daniher could be set for a big one.

Tom Hawkins leads with three selections, but Jeremy Cameron rounds the Cats selections out to four. A couple each for Tom Lynch and Daniher.

Jordan Dawson saw his star rise in 2021 and his move to Adelaide will see him assume even more responsibility. He had three selections. A couple like the look of Jordan Clark off half-back for the Dockers, whilst George Hewett’s understated efficiency was enough to win me over.

Look at these dirtbags with multiple picks. I ask them to pick one and get answers back with two, or even three selections. That’s it – I am doing that in the next section, as well!

JHF seems to be the one everyone is keen to get on, Nick Daicos is not far behind. Both had really impressive preseason outings.

It’s going to be a breakout year for…?

Wow… this is all over the place. You can tell there was no collusion here. Matt Rowell is the only player to have two selections, and you can really see a case for everyone else nominated. If they all have a good run at 2022, it’ll be a fantastic year to be a footy fan.

Biggest story of the year?

HB MEYERS – Midseason draft becomes pivotal in setting up the finals run for one team, as they capitalise on players delisted or “retired” due to vaccine mandates being rolled back.

JB EDDY – Alastair Clarkson officially announced as the inaugural coach of Tasmanian tea, entering the VFL in 2024 and AFL in 2026.

THE DOC – The media will give us repetitive updates on what Alastair Clarkson is doing – after 20 rounds, Stuart Dew is sacked and it leads us to Clarko coaching the Gold Coast Suns in 2023.

HODGEY- The very real possibility of deregistration is discussed, as Toby Greene incurs yet another suspension. Having already exceeded the amount to justify de-registering, an ongoing legal battle ensues.

MATT O – Alastair Clarkson is back as senior coach, but it won’t be with Gold Coast, or a new Tasmanian team. In 2023, Clarko coaches the GWS Giants.

SLUGGER – Remarkable year as no senior coach is sacked.

TRENT – League and club bosses will be scrambling to minimise the blow from crowds not returning in anywhere near the expected numbers. Memberships and attendance decrease dramatically compared to pre-Covid figures as a combination of societal reasons are blamed.

JIMMY – I have very similar feelings to what Matt O shared about Clarko, but for the sake of some variety I’ll say: A player (probably Toby Greene or Devon Smith) is benched by the coach in the third quarter and doesn’t return to the field after breaking the all-time record for 50 metre penalties conceded by a single player in a game.

The announcement from the AFL and Tasmanian State Government when they reach their decision on a Tasmanian expansion club will be one of the biggest news stories of the year.

What’s your one terrible take?

HB MEYERS – The AFL moves to have Toby Greene charged with attempted murder after he brushes past a boundary umpire and says he drinks soy. The umpire goes off injured, with hurt feelings, and the league issues an apology to soy drinkers.

JB EDDY – The crackdown on umpire abuse will actually lead to an uptick in umpire recruitment, causing the afl to take it even further and penalise any form of dissension, including head shakes. Several games are decided from contentious 50s due to eye rolls.

THE DOC – Jack Darling attempts to get back into the AFL as Mr. Gnilrad, a lad who comes from some place far away… yes that will do, and he comes complete with a bushy mustache and a mother-in-law that likes the way he thinks.

When asked about it, Luke Beveridge comments “I thought the umpires did a great job throughout the year and I agree with the decisions they made”

MATT O – With Jeff Browne in charge, Collingwood backflips, and grants Port Adelaide the use of the prison bars whenever it chooses.

SLUGGER – Scoring records! Not only are scores higher because of new rules, teams are kicking more accurate than ever. AFL commission hailed as revolutionaries.

FRANK NGUYEN – Keen to make amends on the final year of his contract, bad boy Jordan de Goey lives up to the Dusty comparisons and claims an unlikely Brownlow medal

DAN – Jack Petruccelle becomes a cult hero after a kicking a goal after the siren in the derby. He then goes on to become West Coast’s best goal scorer for the year.

There we go – who is closest to the mark and what would you have different. Feel free to copy and past the criteria in the comments or respond on our socials. Hey, if we’re sticking our big, fat necks out, you should as well.