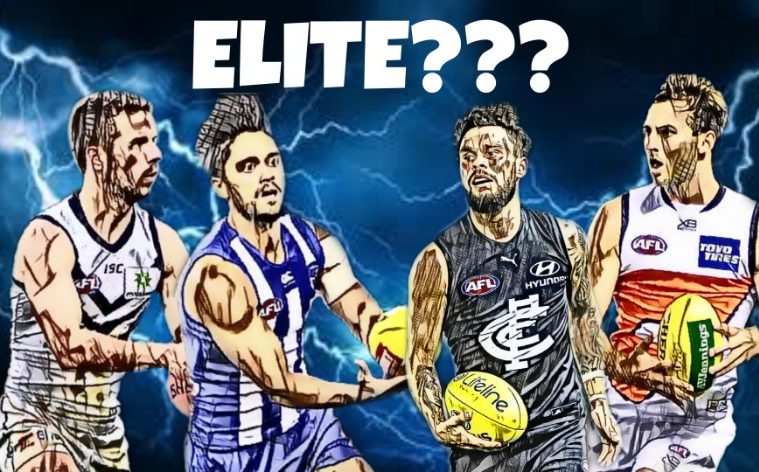 Like many of you, I love looking at the stats pertaining to our game. Different combinations, different triggers, who’s the best at this or that… I genuinely like it and find it an interesting way to assess which players have an impact, and who can do the same with less time and use of the footy.

They often provide the basis for our own little articles about unique combinations of stats that few have ever accomplished. If you hit this LINK you’ll find a whole list of them

These stats are provided, for the most part, by Champion Data. However, every year around this time, my love for stats fades just a little. You see, about a month before the season, this mob releases their list of “elite” players in their positions.

And every year, they seem to find a way to cock it up!

I initially started writing about this with the intent to defend what they do – they are contracted to manage the official AFL stats, and given the nature of or game, it cannot be an easy gig. However, once the numbers are all there, I am not really sure they are using them to the best of their ability. Have they simply dug their heels in and said “this is the way we do it”, or are they genuinely on the lookout for ways to tweak what they do and make it more accurate?

The thing is, if this is the list of elite players they’re coming up with, and they end up rating players who are fringe Best-22 as some of the elite of the competition in their position, then what does it say about the system they’re using to evaluate players?

I know what it says to me.

Having known someone who worked for the company, I’ve had plenty of doubts about Champion Data over the years. The husband of my colleague doesn’t watch football – doesn’t like it, yet there he is (or was… I don’t know if he still works for this mob) doing the work that could feed the public perception of a player. I’m not really sure I trust Champion Data at all, and I damn sure am not going to shell out big bucks to access their work when the eye-test often tells a very different story.

As part of their 2022 Elite Players list, we had household names such as Jeremy Finlayson, Sam Switkowski, Lincoln McCarthy, and Zac Williams. You remember Williams, right? Showed up to Carlton out of shape, tried to run through the midfield and couldn’t keep up, so went back to the half-back line to do what he did best? Yeah, you remember him.

For the record, I like what Williams has to offer and think he is set for a huge season with the Blues, but rating him as elite after what was a very disappointing season in 2021 is simply taking the piss. This is where stats well and truly do not matter and extracts just a small amount of joy from my overall love of them – the eye-test told us that Williams was not up to scratch in 2021, stats be damned.

Finlayson? He had an ordinary 2021. 10 touches and 1.77 goals per game… yet Harry McKay, after wining the Coleman and averaging over three goals per contest doesn’t get a look in? Spare me…

How about Sam Menegola on the wing? Hell, in 2021 he was probably Geelong’s third-best wingman, often overshadowed by Isaac Smith, and the impact of Zach Tuohy when he had a run further up the ground. In his defence, he did have a ripping 2020 season, and won our Mongrel Wingman of the Year award that season, as a result. And in that system, we rank wingmen on the areas of the game that genuinely pertain to their roles.

Aaron Hall was rated as elite despite the fact he seemed to be predisposed to kicking the ball out on the full in the last quarter of close games. That is a hard one to assess, as during the game, he may pick up 20 easy kicks, but when the pressure came in 2021, he faltered. It’s something I have to address in my own player rating system, as it got me, as well. Zak Butters, as much as I love him, only played 12 games for the season, yet still got a run.

Of course, additions only draw attention to those who completely missed out. Max Gawn is not an elite ruckman, apparently. Jack Steele is not an elite mid, and neither is Sam Walsh.

The list comprises 53 places this year, yet some of the best-performed players of 2021 missed the boat. Ollie Wines and Trav Boak didn’t make the cut, for crying out loud! The reason for Wines’ omission was that he didn’t hit enough targets with the footy, apparently. But Adam Treloar gets a guernsey, as does Aliir Aliir, and Aaron Hall. Sometimes, those blokes couldn’t hit the ocean from the beach despite getting a heap of footy uncontested. Do you think that may have something to do with their inflated disposal efficiency? Maybe the same way that Wines has to win the hard, contested footy to get a kick away?

But it is not all negative – a large part, yes, is negative, but not all. Tom Hickey made the cut after a really strong 2021 season, and CD did a good job in recognising what Dylan Moore provided the Hawks, as well. Paul Seedsman’s inclusion made me smile – he was our Wingman of the Year in 2021.

That said, the sour taste the Champion Data “Elite” list leaves in my mouth every season overshadows any of the above sweeteners. Whilst they have managed to create a very successful company dealing with sports statistics, the more I look at the result, the more I come to the conclusion that their formula needs a bit of a tweak.

And while I am out here having a crack at those blokes, I’d be a pretty weak type of bloke if I didn’t put my money where my mouth is and present my own findings.

Using a variety of stats, but also incorporating coaches votes and our own Mongrel Votes on a weekly basis, we have our own rating system that culminates in The Mongrel 50. I’ve linked it for you below so you can compare the 53 players Champion Data have as elite, and the 50 players we rated as the best from 2021. It’s not perfect, but I reckon it stacks up.

Make sure you let me know what you think.