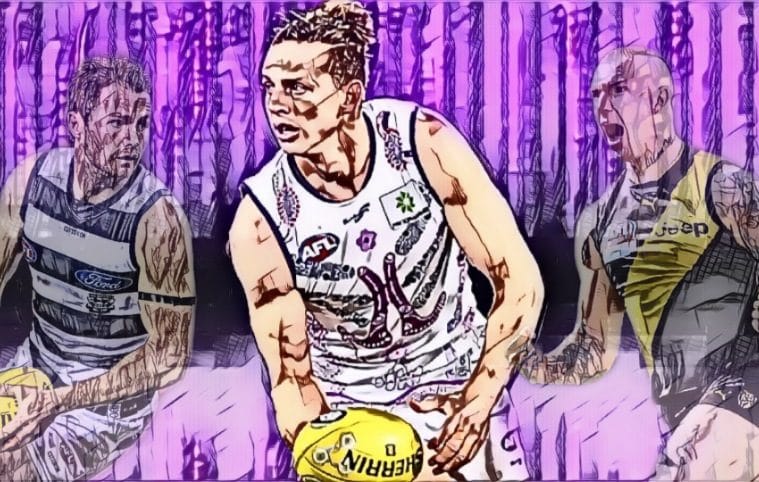 We all have a shelf life.

How’s that for a cheery start to an article?

As negative as it may sound, the sad fact is we are slowly coming to an end of an era in the AFL midfield, with three of the best mids of their generation ticking over 30 years of age. Dustin Martin, Patrick Dangerfield and Nat Fyfe share four Brownlow Medals, three Norm Smith Medals (thanks Dusty), four MVP awards, and 14 All-Australian selections between them, but with their twenties now in the rearview mirror for all three stars, there is a chance the memory of their midfield dominance is now greater than the expectation going forward.

That’s not to say we should be chipping in to purchase walking sticks for any of them just yet – we’re still pooling money to get one for David Mundy – but we’re at the stage where, in fairness, their best footy is most likely behind them.

And with that sad fact comes the inevitable speculation – what positions will these guns play in 2022? Where can they best be used?

The transition from a midfield role to more time in the forward 50 seems elementary for both Martin and Dangerfield – they have exposed form to indicate that their move into attack could reap substantial rewards. Both have taken games over as targets inside 50, with Martin collecting games of 5+ goals on four occasions, and retaining an average of over a goal per game over the course of his career.

Dangerfield averages over a goal per game, as well. His ability to clunk an overhead mark and convert on the scoreboard has seen him become an excellent second or third option working in unison with his key forwards; even overshadowing them on occasion. He too has four games where he’s snagged 5+ goals.

And then we get to Fyfe.

This content is for our paid members. During the off-season, you get 2-3 like this every week. Sometimes four is the mood takes me. Or you can journey over to Fox Footy and read about how every team in the draft deserves an A-Grade rating – they were handing them out like an overexcited Oprah Winfrey after cutting a deal with a Honda dealer. We don’t take a holiday in the off-season – The Mongrel does the work… always.