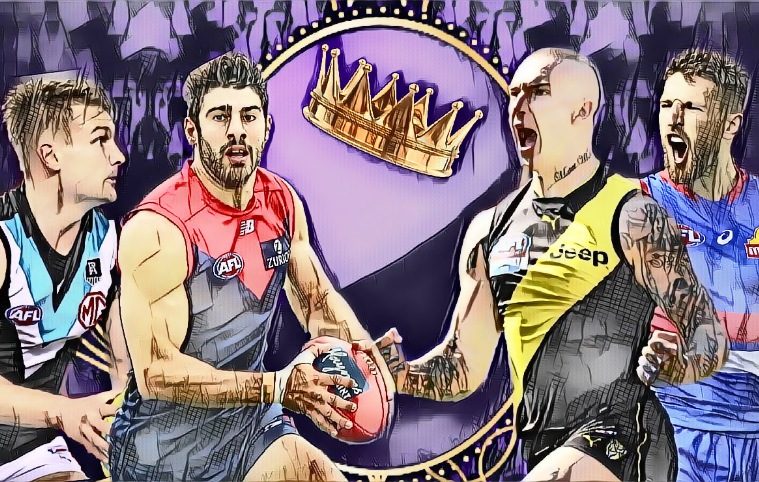 At the conclusion of the 2020 AFL season, there was simply no debate in terms of who the best player in the game was. None.

Dustin Martin had been the standout performer in his third Grand Final, catapulting his name into the rare air as one of the greatest finals players of all – perhaps THE greatest finals player of all time. His third Norm Smith Medal from as many attempts established a record that may stand for a long time, leaving behind him a list of names that rank as some of the best big-game players the game has seen. Luke Hodge, Andrew McLeod, and Gary Ayres had all secured two Norm Smith Medals. None had enough in the tank for three.

Only Dusty was able to. And there was the feeling that 2021 could have provided more glory.

You cannot blame Tiger fans for expecting more. Given the way they brushed aside the Cats to secure the 2020 flag, many were predicting Richmond would ride that wave of momentum to a third straight premiership, and a fourth in five seasons.

Of course, we know how that played out.

The Tigers ceased roaring in 2021. Instead, they offered a yelp here and there, but as the season wound down, they struggled to win games against clearly inferior competition. They looked tired – beaten down by the four previous seasons of intense competition and deep finals runs. Coach, Damien Hardwick admitted as much, stating the players needed a rest. They played like men who wanted to give a little more, but had nothing left in the tank.

And those they had previously vanquished started licking their chops at the thought of exacting revenge.

Dustin Martin started the season out like a man with something to prove, however, by the time the wheels started falling off, he too was in dire straits. He and his brothers in arms (see what I did there?) had lost four on the trot, and were looking down the barrel of missing the finals. Despite a win on the scoreboard in Round 18 against the Brisbane Lions, it was a physical clash between Martin and Brisbane hard man, Mitch Robinson, that left the star Tiger clutching at his midsection, and left the Tigers clutching at a season that was fast slipping away.

A lacerated kidney ended his year on the spot, and with it went the chances of a Richmond title defence. The team that was struggling to recapture the form that carried them to three flags was suddenly without the one player that could spark them. The Tigers were more vulnerable than they’d been in a long time. Geelong, Fremantle and GWS would all capitalise to pick up wins against them in the next four weeks before the Tigers eked out a draw in the dying seconds of the final round. Against the Hawks

Their season was over. The aura had diminished. The sense of the inevitable was gone, and for the first time in a long while, the crown on the head of Dustin Martin just started to slip a little. It hadn’t fallen off, but there were quite a few ready to catch it if it did.

They are still waiting as we prepare for 2022.

There are usurpers to the throne of Dustin Martin who were waiting to sense just a small amount of weakness, looking for the tiniest chink in the armour of a man who, until 2021, had become somewhat of an iron man when it came to injury. However, you cannot fight through a lacerated kidney and when Martin went down, others took their opportunities. There was a slight weakness. There was an opening.

Despite the slaps on the back, the handshakes and the smiles post-game, make no mistake – AFL football is a ruthless profession. All it takes is one misstep to see a player slip quite a way down the mountain. Hark back to the final goal of the 2020 Grand Final. Martin snapped from the boundary to cap off his Norm Smith-winning performance, and in the process, slapped away both the tackling attempt and challenge of Patrick Dangerfield to his throne. That was not just a football play – not just an action as part of a game. That was a statement that left no doubt as to who the number one man in the game was right there and then. That was Dusty letting the world know that Dangerfield was no longer his peer. Dusty had moved past him. Dusty had moved above him.

Not to compare Martin with a player clearly his lesser, but the fall from grace of Stephen Coniglio over the past two years has been eye-opening. In 2019, despite no All-Australian selections to speak of, his reputation as one of the best mids in the game seem secure, and it was rewarded with a long-term deal and the captaincy at GWS.

And where has he been since?

One slip up – one injury, and Cogs tumbled down the mountain as others leapt past him. None stopped to offer him a hand up. He was hurt. He was lesser. And as a result, his weakness was preyed upon by his rivals. They stepped past or over him as they continued to climb the mountain, themselves. Not only did he fall back to the pack, but he also fell behind the pack. It can happen that quickly.

Martin’s injury is not the type that should prevent him from getting back to his best. It was serious, but it will not hamper his running this coming year the way recovery from a knee injury could. His injury was freakish in nature, but it is something he should manage to overcome.

As we head to 2022, Dustin Martin finds himself in unfamiliar territory. Having sat atop the AFL mountain, and having worn the crown as the best player in the game, his 2021 season, largely through no fault of his own, brought him back to the pack a little. Players like Marcus Bontempelli, Christian Petracca, Clayton Oliver and Ollie Wines started eyeing off the position held by Martin with hungry eyes. At 30 years of age, the challenge has been thrown at his feet. The younger blokes have got better. They look and act like the stars of the game right now, and Martin… well, believe it or not, the challenge to elevate his game is now before him.

He’s done it before, and has emerged as the man when the Patrick Dangerfields and Nat Fyfes of the world have staked their claims.

Can Dusty stave off these new challengers?

Can he once again stamp his authority on a league that quickly moves on to the next set of champions? And for how long can he hold them at bay?

Despite the 2021 set of individual player honours going to Petracca, Oliver, Wines and Bontempelli, the crown still sits on the head of Dustin Martin. Sure, it is not as secure as it was 12 months ago when it was good to be the king, but it remains there as we head into a new season.

Will Martin be wearing it after the 2022 season? And if not, who will finally snatch it away for good?