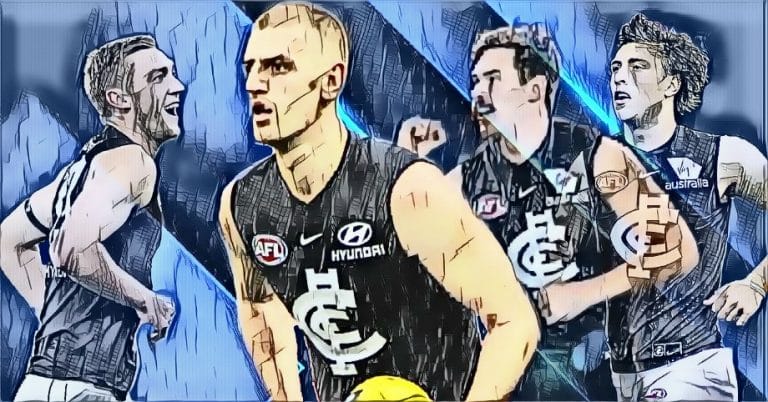 Keeping Up Without Jones

After Liam Jones was named as the Carlton player hesitant to receive the Covid vaccine over the last week, it should have come as less than a shock when he pulled the pin on his career.

With 2022 to run on his current contract, the 30-year-old opted to retire early and leave the game behind, but what has his departure done to the Carlton defence?

Whilst I am sure everyone has an opinion on Jones’ decision and the reasons surrounding it, we’re going to concentrate on footy and leave the moralising to others. If you’d like to chime in on that stuff, head over to Fox Footy… they love that crap.

We’re a footy site – I want to know how this impacts Carlton and their chances next season. Who has the potential to step up? Who will be forced into a role they’re not quite ready for? And how will this effect Carlton’s immediate goal of making the finals in 2022?

The Blues have been threatening for a while. With over 700 games of experience in their players aged 23 or under, they are ready to take the next step, but Jones played the role of a pillar in their defence, enabling some of the younger defenders to learn and develop without the pressure of playing in a key defensive post. In a nutshell, his presence will be sorely missed.

Jones ranked fifth in the league in intercepts in 2021 on averages, with 8.42 per game. He coupled that with a seventh-overall ranking in one-percenters, notching 8.26 per game. For those mathemagicians amongst us, that is 16.68 contests per game that Jones either won, or halved. He was a tough man to beat.

The only other men to rank in the top ten in both those categories were Harris Andrews, Jacob Weitering, and Sam Taylor. When you consider how highly we speak of those three, Jones, if anything, was likely vastly underrated in his role.

So, how do the Blues go about replacing someone that was arguably a top-ten defender in the competition? Who are the contenders to step into the role?

I’ve heard his name thrown around a bit, and there was a time a couple of years back where he, Jones and Weitering started looking like a pretty potent trio in defence.

Alas, injury has not been kind of Marchbank, and coming back from a knee reconstruction, it is a huge ask to ask him to suit up and take on the responsibility of a key position immediately.

To begin, Marchbank is listed at 193 cm and 93 kgs. That is shorter than Jack Silvagni, which makes me question the suggestions of him slotting into a key defensive role. If the Blues are hell-bent on fitting him in there, they could be well-served in allowing him time to regain confidence in his body.

As a knee injury veteran, myself, I am always looking 12 months down the track from an official return before expecting too much from someone on the comeback trail from an ACL injury. I don’t think we’ll see what he is capable of in that capacity until 2023, sadly. Sticking him in the role early may do more harm than good, particularly when it comes to his confidence.

Talk about landing in the right spot at the right time…

Lewis Young opted to leave the Dogs and head to the Blues with the knowledge he’d have a few players ahead of him. At 197 cm and 96 kgs, Young has the physical attributes that match the absent Jones well, but his 24 games, with just nine in 2021, speak of a player who is yet to find his place in the league. He may well surprise, but it is a huge ask to go from being a fringe player to filling a best 23 position at another club, whilst learning their systems and adapting to new surroundings. It is something that is often disregarded when a player switches clubs.

Young will no doubt give it a red-hot go, however, he was playing backup ruck at the Dogs and really is unproven as a defender at AFL level.

If he gets a run in the role, I would expect an up and down season. He may have moments where he is solid and holds his own, but I would also expect more seasoned forwards to get hold of him at points. That said, someone like Harrison Petty at Melbourne had an opportunity present when Adam Tomlinson was injured, and he became a premiership defender as a result.

Has shown plenty, but is too young and too light just yet. Weighed in at just 82 kgs last season, so even with a good pre-season in the gym, you’d think 4-5 kgs would be all he could muster without losing aerobic fitness.

Kemp may very well turn into a very good key defender at some point, but to ask this of him at such a tender age (he will turn 21 in May) is the type of thing that can ruin the confidence of a young kid (I think of both Ryan Schoenmakers and Zac Dawson in their younger years – they were both thrown to the wolves, asked to play on blokes with 10-15 kilograms advantage on them).

If possible, Kemp should be brought along slowly.

He is my pick to start the season in the role until Marchbank gets some game time under his belt.

At one of three Blues to weigh in at over 100 kgs to commence the 2021 season, McDonald has the size to match-up on the power forwards of the competition and isn’t the lumbering type of player that usually comes with that type of body weight. Whilst I do not believe he is the long term answer, plonking him in the defensive fifty and having him carry a heavy load for the first half of the season could be the best option for the Blues.

And if he falls over in the role, it’s not like they were prepping him for a major role somewhere down the track, right?

Is this the redemption arc for Mitch McGovern? Is this what we’ve been waiting for?

Pretty sure the answer is no, but I am not ruling it out. McGovern has been a disaster in navy blue, failing to have any impact over the course of his three seasons at Ikon Park. Restricted to just five games in 2021, there are those that believe that Gov’s time to shine is now. To me, that sounds more like hope than belief, as Carlton have given the 27-year-old ample opportunity to break into their side and make meaningful contributions. He has squandered them all, making an art form out of being exactly where the ball isn’t.

To make matters a little more difficult, McGovern is no tower of strength. He is 191 cm, and 93 kgs. Smaller and lighter than Jones, and to be fair, not in the same physical condition over the past few seasons, he has a mountain to climb if he is to take up the mantle of key defender.

Look, maybe a move to defence will be great for him, but can you see him repelling attacks like Jones did? I see him more as the third defender than the key defender, just as I saw him more as a third forward than one of the main two avenues to attack.

The Blues have been patient with McGovern, but eventually, patience wears thin. This has to be his year, or you wonder why they have him on their list at all?

The loss of Jones is a big one. As mentioned at the start, replacing a player who is top ten in the league in the two major defensive categories is no easy task, but should the Blues find someone who fits their style, he is not uncoverable. Maybe someone a little more selfless could provide them with a more balanced unit down back? I know one of our more esteemed readers believes that to be the case.

Sure, it would have been nicer had Jones been on board, but players are injured early in the season often. This is akin to one of those cases, only the Blues now get a chance to experiment with their line-ups through the preseason.

How do you see the Blues covering this loss? As always, hit me up in the comments, or on our socials.