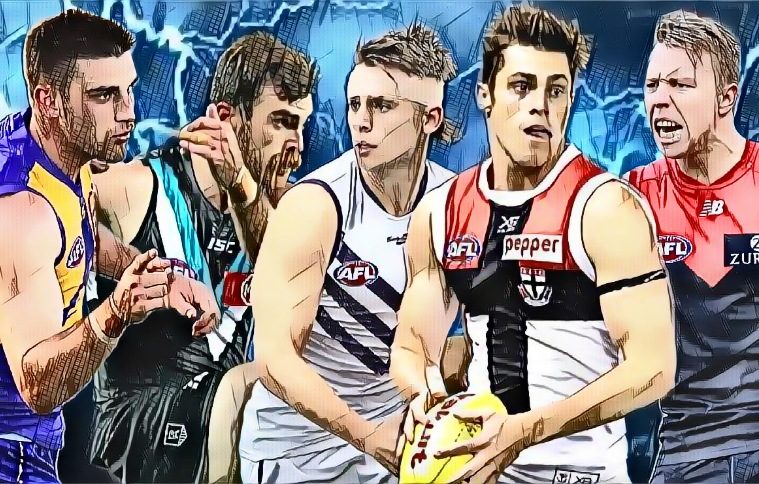 We all love a bit of mongrel in our teams, don’t we? When the chips are down and someone needs to make a stand, inevitably, it is the player that just wants it more that makes a difference.

But how do we define this mystical “mongrel” attribute? It kind of means different things to different people. To some, it may be the player who shows enormous courage, putting his body on the line in contests – someone like Glenn Archer, for example. To others, it could be someone who walks a fine line between what is acceptable in the game, and what is not… someone like Glenn Archer, for example.

I kid… Arch was a warrior and had a huge dose of Mongrel in him whichever way you look at it.

Others, still, would define it as a player who will make an impact on the game physically, or someone who can get under the skin of the opposition. Do any of these interpretations carry more weight than the others?

It’s all rather subjective.

And lucky for me that is is, because really, I’ve had a gutful of being objective and I want to be as subjective as I damn well please in this column.

And so it is that we continue on our journey of the top thirty mongrel players in the AFL. Here are numbers 20-11. Giddy up.

Outside of Carlton, Ed Curnow may have had one of the more underrated careers in recent memory.

I reckon he should have started a “Hire-A-Hubby” kind of business, because no matter what the Blues needed done, Curnow was the man they’d turn to. Need a contested footy win at a stoppage? Ed would be in there. Need the brakes put on an opposition midfielder that was having just a little too much of a good time? Curnow was the man.

Despite consecutive top-three finishes in the Jon Nicholls Medal, Curnow rarely got plaudits in the press, often getting his name thrown in at the tail end of the “Best” section, yet never genuinely praised for what he brought to this Carlton team. The hard work of Curnow has been integral to the Blues covering for the game style of Patrick Cripps in recent seasons, as their superstar clearance winner doesn’t have the best defensive side to his game. Luckily, where Cripps falls down, Curnow stands up, time and time again.

I get the feeling that Fog would have fit in well in the eighties and that the rules and regs of the current game impede his physical nature. Still, he does love to run into people, and doesn’t hesitate to put someone on their backside if the opportunity arises.

I see a lot of potential in Fogarty, but he simply doesn’t get enough of the footy. I often wonder whether this leads to frustration and the temptation to step outside the rules. He is a lump of man and at 22, could still become the most hated man in the game due to his ability to lay people out.

On a personal note, I’d love to see him be a little MORE physical – it is an aspect that has been umpired out of the game to an extent, and as long as he does it fairly… or at least as close to fairly as he can without being suspended multiple times, he could become a game-changer.

Maynard’s mongrel comes in the contest. Please don’t attempt to read it any way other.

He is a genuine combative defender who will take on his opponent on his merits, not rely on help defence and wear the results. One of the great one-on-one duels in recent history saw Maynard take on Toby Greene, and though Maynard had his colours lowered, you have to respect what Maynard was able to do, and also how he reacted after being beaten in one contest, actually applauding the work of his opponent as he was outbodied and had a contested mark taken against him.

Just because you have a bit of mongrel in you doesn’t mean you’re a bad sport, right?

The future of the Fremantle midfield is in good hands, with Caleb Serong providing the grunt to power the Dockers toward finals.

Still just a baby by AFL standards, Serong has been given a crash course in contested midfield work and he has relished the responsibility. With Nat Fyfe banged up like Joe Ganino in prison during the last couple of years, the development of Serong has been fast-tracked and he has responded beautifully.

A 2020 Rising Star award was followed up with a stellar 2021 season that saw Serong’s combative nature elevate him into the top tier of Freo mids, alongside Andrew Brayshaw. It is no coincidence that the majority of Serong’s highlights include him breaking tackles, or being physical – the kid has all the tools to be one of the best mids in the game.

I like Lycett. I like a big, strong ruck that uses his size to his advantage, even when it is against blokes his own size.

Lycett and Port Adelaide sent a message to the competition when they took on the Demons in 2019 and “beat up” Max Gawn at every opportunity. Lycett was teamed with Paddy Ryder at the time, but it was the “ruck bully” role that Lycett embraced that day has seen him become one of the more physical ruckmen in the game.

In 2021, his aggression saw him suspended for four weeks for a dangerous tackle (I hate that rule – I reckon he got screwed considering what some players were allowed to get away with), so it is clear Lycett is willing to throw his weight around whenever he gets the opportunity.

Controversial, I know, but I am not sure there’d be many opposition fans that wouldn’t label him a mongrel in the most derogatory sense of the term.

Weightman earned the ire of footy fans with both his penchant for milking free kicks, with Essendon supporters particularly feeling outraged by his flopping, but for me it wasn’t so much the free kicks – it was the little smile he’d have after the whistle blew, as though he knew he’d just put one over the umpire.

There may be some that argue Weightman shouldn’t be on this list with the blokes who have genuine aggression in their game and a reputation of putting their body on the line, but as I stated in the opener, “mongrel” means different things to different people, and the way Weightman plays really hits a nerve with plenty of AFL supporters.

I guess the last word on him goes to our resident Dogs supporter, Alex Docherty – “If he wasn’t playing at my club, I would probably hate him.”

Where would St Kilda be without this bloke? A certain creek without a paddle is the answer you’re looking for.

And he has an ample supply of mongrel to do it.

Steele is the type of player that can turn a disadvantage into an advantage on sheer will alone, and while the Saints were struggling in 2021, there was one bloke who grabbed them by the scruff of the neck and said “follow me, boys”.

That man was their biggest mongrel and their best leader – Jack Steele.

Butters throws himself into contests with the aggression of a bloke that weighs far more than the 75 kilograms he is listed as.

He is up for the contest, does not back down, despite his diminutive size (at the moment) and will willingly put his body on the line if it means his teammate gets a clear run at the ball. When you watch footy, you are often drawn to the bloke on the move at stoppages – the player darting through to rove the footy and kick the winning goal – Butters has been this player. However, he has also been the player doing the hard stuff, the unsung stuff, that creates the opportunity for others to be the hero.

I love what Butters brings to Port. Injury robbed him of the chance to demonstrate his full potential in 2021, but the cheeky half-forward should be ready to hit 2022 hard.

There is plenty of mongrel in this Melbourne team, but James Harmes would be in strong consideration.

He is the designated stopper. When someone is presenting the Dees with an issue, Harmes is deployed to put a stop to it. However, Harmes is more than just a tagger – he can branch out and hurt running the other way, as evidenced at times throughout 2021 where he topped 20 touches (10x).

However, it is the defensive side of Harmes’ game that is his strength and when the Dees need someone to step up and shut someone down. In consecutive weeks in 2021, Harmes made life miserable for Tom Liberatore and Lachie Neale, effectively shutting two of the more prolific mids out of the game at points where their team needed them most.

The job on Neale was spectacular, with Harmes restricting Neale to two effective touches for the quarter as the Dees overran the Lions. That type of mongrel changes games and in a premiership team, having a player like Harmes at your disposal means that when the going gets tough, you can get Harmes going.

Over the last couple of months, I have been working on a list of players called the IGAS list. It stands for “I Give A Shit”. It was initially called the IGAF list, but you know… I try to be only a little bit offensive.

Anyway, after watching Yeo in 2021, I find it hard to look at anyone else in the league as the worthy number one player. Every action, every moment, every play… Yeo looks as though he cares more than anyone else on the ground. Whether it is covering space, chase, blocking, tackling… everything he does, he looks as though it is the most important action in the world right then and there.

Is he the best two-way midfielder in the league? When fit, it’s hard to argue against him. He delights in dragging down his direct opponent and when given an assignment, there are few better at limiting the influence of their target.

Yeo has been slowed in the last two seasons by injury, but a fit version of him for 22 games makes the Eagles a very different-looking outfit.