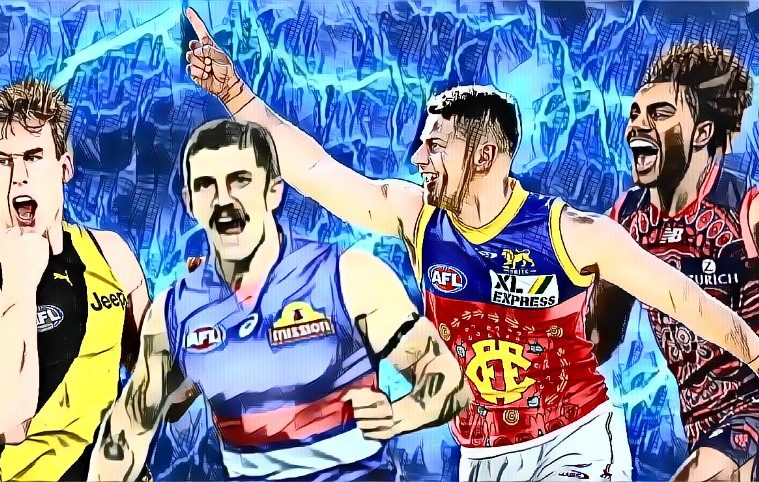 We all love a bit of mongrel in our teams, don’t we? When the chips are down and someone needs to make a stand, inevitably, it is the player that just wants it more that makes a difference.

But how do we define this mystical “mongrel” attribute? It kind of means different things to different people. To some, it may be the player who shows enormous courage, putting his body on the line in contests – someone like Glenn Archer, for example. To others, it could be someone who walks a fine line between what is acceptable in the game, and what is not… someone like Glenn Archer, for example.

I kid… Arch was a warrior and had a huge dose of Mongrel in him whichever way you look at it.

Others, still, would define it as a player who will physically impact the game or someone who can get under the skin of the opposition. Do any of these interpretations carry more weight than the others?

It’s all rather subjective.

And lucky for me that it is, because really, I’ve had a gutful of being objective and I want to be as subjective as I damn well please in this column.

And so it is that we embark on the list of top Mongrel players in the league at the moment. How do they stack up? Who is rated too high, too low, or forgotten completely? Well, there is only one way to find out. Giddy up.

I went back and forth on this selection. As you’ll see below, there are a couple of dozen who are very unlucky to miss out on selection, but the angry ant from Essendon just could not be one of them.

When Smith is on his game, he is a pressure machine, looking at both attacking the man with the footy and getting under his skin when he doesn’t have it. He’s a yapper, an antagonist, and simply… a bit of a pain in the arse at times, but then he has a game like Round 23 against the Pies where he not only was a thorn in their side, but several other places as well as he was the standout player on the ground.

We are now three years removed from Smith’s best footy. In 2018, he won the Crichton Medal in his first year as a Bomber, but he still has plenty to offer when he gets the balance of “goal kicking forward” and “annoying as hell forward” correct.

Mongrel can also be about toughness – both physical and mental.

Remember when Sydney Stack obliterated Jack Viney and sat him down a couple of years back? Did Viney complain? Nope. Did he get up and remonstrate? Nope again. He just continued playing good, hard footy.

There was a point where I kind of got sick of the commentators telling me how tough Jack Viney was, but since that moment with Stack, I have watched him take several bit hits, including a knee right to the face in a marking contest, and Jack Viney just continues to get up.

No posturing, no posing, no bullshit about Jack Viney – he is what my old man would have called a footballer’s footballer.

He sure knows how to make people dislike him, doesn’t he?

Many had a bit of a dislike for Lynch after his move from the Gold Coast to the then-powerhouse Richmond team. Hindsight tells us that it was the right move – an intelligent move – that reaped two flags for the former-Sun.

But Lynch enhanced his mongrel-ness…. which is now a word, with some cheap incidents on the field that, ultimately, worked in his favour. Call it sneakiness, call it cunning, of=r call it being a mongrel, the way Lynch was able to bait defenders into being overly physical by giving them a bit of a love tap in the guts… it bloody worked for him.

He is no longer the mongrel he was, but he is still way more mongrel than most. Does that make sense? It does to me.

I’ve written this before, but I sincerely believe it – Cotchin is now a “moments” player. He is the one throwing his body at the contest at certain points of the game to wield influence over the course of the match. He does the little things – burrowing in to get the ball free, crashing into an opponent in order to create a 50/50 where it was closer to a 70/30 against him, and giving just that little bit extra in a tackle to make sure the opponent knows it was him.

We are in the twilight of a remarkable career from Cotchin, but there may be just a few moments in 2022 that will remind you of what a genuine mongrel the former captain is.

This was a difficult one. Not a mongrel in the dirty sense of the word at all, I liken Oliver’s game to that of a junkyard dog.

If there were a group of growling, hungry dogs and you only had one bone to offer, I reckon Oliver emerges with the bone.

The thing about Oliver is that he is completely unafraid to take a hit if it means he’ll get a touch of the footy. Head over it, crashing into contests, extracting the footy and doing something with it more often than not, he is a mongrel in every sense of the word EXCEPT when it comes to knocking people on their backsides. He has “people” for those duties.

Would have been rated a bit higher had he punched Tom Lynch instead of punching the padded pillars in the dressing rooms, but I guess restraint is an admirable quality.

Collins is an old-school defender who makes opponents pay more often than not and genuinely looks like he gives a damn when things do not go his way – believe it or not, there are not too many of these players in the league.

As the key man in the Suns defence, Collins brings a hard edge to the back six – I do not know where they’d be without him.

I had Dev Smith rated at 30, but Dayne Zorko is like Smith on steroids.

Not that I think Zorko is abusing substances, but it would explain his sudden outbursts and peculiar behaviour at times.

Zorko is the ultimate pest that can back up his shenanigans. He is often either trying to milk a fifty-metre penalty with some overly exaggerated flop, only to give one away, himself, for something far sillier.

Luckily, the positives from Zorko far outweigh the negatives and though he is a cheeky bugger, he is also one of the best players in the league, as evidenced by five, count ‘em – FIVE Brisbane Best and Fairest awards.

Similar to Clayton Oliver, Taylor Adams is a see-ball/get-ball type of player but there is an underlying sense of anger about him. It’s as though he plays on the edge and could tip over it at any moment. He looks like he is teetering at times, but he never quite falls afoul of the rules.

He too is a tackling machine, and flat-out refuses to allow an easy passage out of the guts, often finding himself at the bottom of a pack, scrapping for the footy as a result.

If you’re guaranteed one thing from Adams, it is that he will crack in make an opponent earn every touch. When not battling injuries, he is one of the most underrated mids in the caper, and might very well be the next leader of the Magpies due to his unwavering commitment.

Not really. You see, there are players that do the flashy stuff well and get lauded for it – you could be forgiven for assuming that Pickett is one of these characters, given the way the commentators seem to wet their pants whenever he goes near the footy, but I reckon it is the little things that make him special – the things that make a difference without you even knowing they do.

Pickett is a master of bodywork and clearing a path for his teammates. It is almost a forgotten art in modern footy, but Pickett is so adept at it that people just miss it until you slow things down and see what he does.

He looks for contact. If he is out of the contest, he makes damn sure he prevents an opponent from being involved, either. If you get the chance to go back and watch the Grand Final again (like Melbourne supporters won’t do just that dozens of times), check out the way he positions himself, blocks and then applies pressure. I hate to make this comparison, but there is a shitload of what Cyril Rioli used to do on quiet days about what Kysaiah Pickett does on quiet days for the Demons.

Credit for the below video goes to Reddit user r/The_Frig

If you lined up the Western Bulldogs midfield and compared them to vehicles, you would probably picture a bunch of high-end sports cars. Bont… he’s the Ferrari, right? Macrae… he’s like a Porsche, and so on…

And then, on the end would be Libba – a beaten up old ute that looks like it’s been decorated by a blind man.

But the work of Tom Liberatore in that Dogs’ midfield should not be discounted because he is not as flashy as his onball teammates. He is the grunt you need when the going gets tough. Early in the 2021 season, he dominated the clearances, and at one point, he was on track to break the record for the season. He tapered off, but whenever the Dogs needed someone to put their head over the footy, it was Libba who answered the call…

… except in the Grand Final, but that was hardly his fault – the Dees were close to unstoppable for the last quarter and a bit.