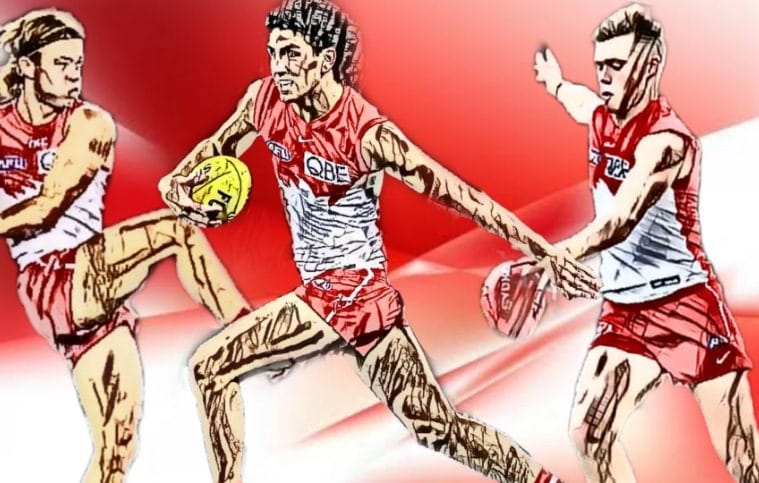 The Sydney Swans lost two important pieces to a puzzle where things just started to fit together beautifully in 2021.

And with that, people have foolishly started dismissing them.

Whilst the departure of emerging star, Jordan Dawson, is a kick in the teeth, and the free-agent signing of George Hewett by Carlton leaves their midfield slightly undermanned, anyone who chooses to disregard Sydney in the race for top four in 2022 obviously did not watch the team play this season, or has failed to recognise the depth of the team that looked for a fair while as the team that may just cause a bit of havoc in the finals.

In the end, the Swans fell by a solitary point to a gutsy GWS side, but coming from 16th in the 2020 season, the Sydney rebuild hit high gear in 2021. Their rise was sudden and took many by surprise.

But should it have?

The return to the team of Lance Franklin, an injury-free run for Isaac Heeney, and both the intelligent recruiting (Tom Hickey) and the development of those in the 22-26 year old age group (Papley, Florent, Mills, Hayward, and yes – Hewett and Dawson) gave Sydney a lift that was complemented by the injection of youth, particularly early in the season.

THE LOSS OF DAWSON

It feels nice to get something right once in a while. Looking back at some of the predictions I made to start to the 2021 season… well, to say I was a little off the mark would be like Lady Godiva claiming she had nothing to wear for a trip through Coventry. However, one I did get right was the rise of Jordan Dawson.

The half-back improved to the level where he became one of the more potent weapons in the game, able to play either wing or half-back, and hit the scoreboard in the process. His penetrating kicking, and strong hands on intercepts made him a vital piece of the Sydney rebound.

But so vital that he is irreplaceable?

Not as prolific as Dawson, McInerney is a couple of years younger, and already looks to have the goods to grow into the role that Dawson was making his own. At 18 touches and three inside 50 deliveries per game, the hard run of McInerney will undoubtedly reap rewards in 2022. Whether he is able to immediately replicate the form of Dawson is unlikely, but he has already demonstrated the aptitude to play multiple positions and play them well. His speed across half-back and surprisingly hard attack on the loose footy provided Sydney with a different look in defence, and the team lost little when McInerney moved to the wing.

So, how do they measure up at the same point in their careers?

As you can see, the numbers for these players are similar, and whilst Dawson’s kicking is better currently for distance, he went at 72.3% by foot in 2019. McInerney is at 76.0%.

If this loss hurts, it hurts for a season. McInerney is a player that can continue to improve and a ready-made replacement for Dawson.

You have to wonder – did Longmire see Dawson’s departure on the horizon mid-season, grooming McInerney to replace him? If so, it is a brilliant move and one that should be acknowledged.

… what if Longmire opts to keep McInerney on the wing and not use him as he used Dawson? What else can the Swans conjure?

They can conjure Braeden Campbell.

With just eight games to his name in 2021, Campbell struggled to get back in the swing of things after returning from a lengthy stint on the sidelines. However, we saw what he was capable of early in the season, as Longmire used him from half-back, and the rookie showed he was not at all fazed with taking what could have been risky kicks.

Trusting his left boot, Campbell let rip a couple of sizzling passes early in the season that made it impossible to ignore his kicking skills. A fully fit version of the number five pick last year with another pre-season behind him will be encouraged to trust his skills, as Dawson was, as he learns his craft from half-back.

How can we be certain he’ll play off half-back?

Well, the Swans did exactly that with Callum Mills as he refined his game, before giving him the chance to excel in a midfield role this season. Sydney do not operate on the timeline of others, and rarely rush a player who is not ready for a role. Campbell will be a midfielder in due course, but for the next 12 months, I would wager his best position would be a half-back flank as he learns his craft. This could release McInerney to the wing more often. Either way, the loss of Dawson is nowhere near as bad as it may have seemed, or as bad as some have made out…

… but yes, a little bit of a better deal would have been preferable for him.

THE LOSS OF HEWETT

This is a tricky one.

I really rate the game of George Hewett – unsung, not playing for personal stats… he is exactly the type of player Carlton needed. Sadly, he was exactly the kind of player Sydney needed as well.

Luckily, however, Sydney have something up their sleeve in the form of James Rowbottom.

The re-emergence of Hewett after a nagging back injury that cost him most of his 2020 season saw Rowbottom sit on the periphery of the Sydney list. Basically, anything Rowbottom could do, Hewett could do a little better. That’s not to say Hewett will be remembered as a better player – but in 2021, we were talking about the difference between a 20-year-old, and a 25-year-old. Hewett had the mature body, and that was what was required by the Swans.

But Rowbottom is a competitive beast, and the nudge down the pecking order should become a driver for him. With Hewett out of the picture, a window of opportunity opens up for him, and he needs to prop it open early, and keep it that way.

Though his disposal can let him down, he is a fierce tackler and will happily mix it up on the inside. Given a negating role to play, much like those carried out by Hewett at points in 2021, Rowbottom could be the player to make a real impression for the Swans in 2022.

Seven of his 17 games in 2021 saw Rowbottom register 8+ tackles – he will niggle and scrap all day if permitted.

It must also be mentioned that Hewett’s back was a real worry, and despite the Swans not wanting to lose him, the Blues are taking a calculated risk. As a neutral supporter, you’d wish Hewett all the luck in the world and hope his injury worries are behind him.

So, what are the Swans losing in the Hewett/Rowbottom picture. Let’s take a look.

Whilst the Dawson move garnered all the attention, this one may hurt a little more. Rowbottom’s defensive skills are excellent, but he will need to find more of the footy. Hewett jumped to a career-best 21.86 touches in Year Four, and that is the same year Rowbottom now enters. He will need a big lift in output to counter the loss of Hewett.

Whilst the losses of both Hewett and Dawson garnered plenty of interest from those looking for the negative side of the story for Sydney (basically the entire AFL Media), the net result could be good in the long run. Yes, there will be moments where Dawson’s run from half-back and a long goal on the run are missed, but will people look at Braeden Campbell stream off half-back and make the connection that is was Dawson’s departure that allowed him that freedom? Will they equate McInerney’s dash through the middle of the ground to Dawson no longer being the preferred option, or will they just lament his absence when things go awry?

Will they play the “what if…” game when a midfielder gets a hold of the Swans and ponder what would have happened had Hewett still been there, or will they acknowledge the departure was not so bad when Rowbottom, another year older, fitter, and stringer, puts the clamps on the opposition’s best mid and stops him?

It is never pleasant when a player you’ve put time into leaves the club, but in the case of the Swans, what they have coming through is enough to make these losses bearable. And come the 2022 season, the development of the three young players detailed in this article may well be cause for celebration.

Sometimes, all that is required is an opportunity. Braeden Campbell, Justin McInerney, and James Rowbottom now have just that.

Time to make the most of it.