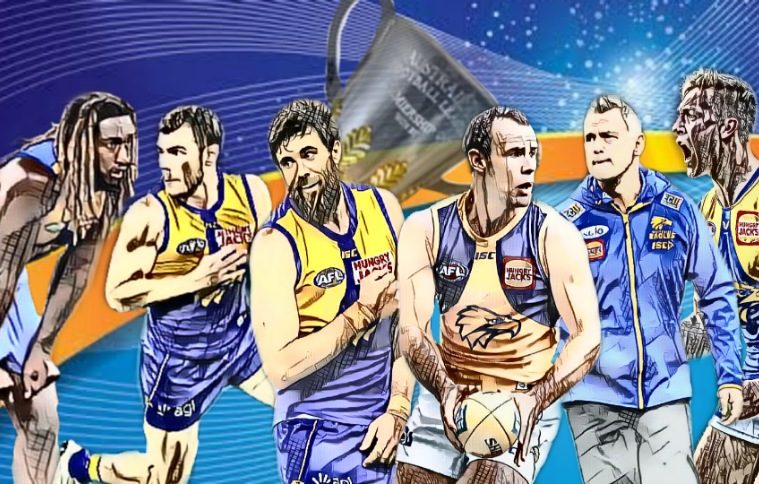 There were some raised eyebrows in relation to the West Coast Eagles in 2021, and definitely not in the manner of someone impressed with what was happening.

The Eagles had an up-and-down season that mimicked a ride on a pretty tame rollercoaster – the lows were very low, and the highs, well… they just weren’t that high. Smashed by injuries to key midfielders, the Eagles were forced to play the majority of the season without their preferred on-ball unit intact.

Their captain, Luke Shuey, was almost the forgotten man. As a matter of fact, it took a case of foot-in-mouth from a paid professional, Matt Rendell on Trade Radio, to emphasise just how forgotten he was. In assessing the Eagles’ captaincy situation, Rendell recently remarked this week that West Coast should move the captaincy from Shannon Hurn to Shuey for a year, before handing it to Elliot Yeo.

After being informed that Shuey was already captain of the team, Rendell then changed tack to state the captaincy should be moved from Shuey to Yeo right now.

All jokes aside, West Coast got bugger all from Shuey this season. His hamstrings betrayed him, and like so many of his high profile teammates, he was unable to have an impact on this team.

Finishing in the dreaded ninth position, after threatening to make a run at the top four at one stage, West Coast found themselves without Yeo, Shuey, Barrass, McGovern, Allen, Hurn, Rioli, Ryan, and Witherden for extended periods of time throughout the season, forcing them to field young players who weren’t quite ready to cut it in the big time. Oh, they will be ready, eventually – but Adam Simpson would not have been planning on introducing them gradually. Instead, players like Harry and Luke Edwards, as well as Luke Foley were probably a fair bit removed from the best-22 of the Eagles in 2021, yet there they were, holding down positions in the starting 18.

Of course, in an ideal world, the experienced heads at West Coast would have guided them through the low points and dragged the team back into contention. A fit and firing midfield consisting of Elliot Yeo, Luke Shuey, Tim Kelly, Dom Sheed, and Jack Redden being hand-fed by the dominant Nic Naitanui would give any opposition fits. But it was not often we saw that combination on the park. Not all together. Not all healthy.

2021 provided West Coast with a world that was far less than ideal, and though injury played a big part in their tumble from contention, there were some overall efforts that were just insipid.

Their 97-point thrashing at the hands of Geelong at Kardinia Park was the type of black eye there was simply no hiding from. Rewatching that game, simply put, the Eagles did not have a crack and found themselves on the end of a ten goal to none run in the second quarter. The Geelong home ground has not been a happy hunting ground for West Coast, but they played that game like a team that didn’t want to be there, and had already conceded the loss. And they were treated as such by a Geelong team that sensed weakness and fed on it like a frenzy of sharks.

At the same venue later in the season, the Eagles ran the white flag up the pole again. This time, it wasn’t even against the home team. Due to the dire covid situation in Sydney, the Swans travelled to Geelong to take on the Eagles at the Cattery. West Coast fared five points better in terms of the margin against the Swans, going down by 92 points. Sydney pummeled West Coast, with an 11 goal first half. In that time, the Eagles managed just one major. And just three for the game.

Any way you slice it, the efforts of this proud club in those two outings in Geelong were abysmal and embarrassing. West Coast supporters knew what was up immediately after those capitulations – good teams don’t lay down like that. Even average teams showing a bit of heart don’t lay down like that. In two games at Kardinia Park in 2021, West Coast had managed a total of 66 points.

Against them, teams scored 254.

Efforts like those would usually result in some soul searching at the club – at any club – but as we look forward to the 2022 season, it seems as though no one is really being held accountable for these performances. There is no push to invest in the draft, no push to make significant trades, and no moves to tap some of the veterans on the shoulder and look to those who would replace them as the next star. Was 2021 viewed as a blip on the radar for the Eagles? And if so, is that view somewhat overly optimistic?

Josh Kennedy has become a legend of the club. The all-time record-holder for goals kicked in a West Coast jumper, Adam Simpson described him as a “legacy player” late in the 2021 season when asked about his full forward’s playing future. He basically said Kennedy has earned the right to make the call on his future, which, in and of itself, is a wonderful gesture.

Kennedy will run around again in 2022.

However, waiting in the wings for the opportunity to become one of the top two forward options on the team is Oscar Allen. The retention of Kennedy means that he will be once again relegated to the third tall position most of the time – a handy third tall, but basically living off the scraps of Kennedy and Jack Darling.

Allen has displayed a brilliant pair of hands, and attacks the ball ferociously. Coming into the 2021 season, our resident Eagles and Dogs supporters on the Mongrel team would often argue as to which young forward would be the one to take the big step – Allen or Naughton.

It seems that argument has been won… for the time being. However, having Allen playing as the third option whilst Naughton continues to become the man in the Bulldogs’ forward half will not see the young Eagle bridging that gap. Particularly so if he is deployed as a stop-gap whenever McGovern or Barrass pull up sore.

The question here is – does allowing Josh Kennedy to make his own call stifle the development of Oscar Allen? The follow-up question is – does it also do what is best for the team?

Shannon Hurn was another whose future was up in the air. His massive legs have been like pillars for the Eagles to build around for the past however-many years, but those pillars have been a little shaky when it comes to injury over the past couple of seasons. You cannot help but like Bunga, but at the same time, you cannot help but wonder whether he needs someone to tell him his time is up?

Whilst you simply cannot replace the experience of Hurn, to say he is not the player he was a couple of years ago would be an understatement, and whilst nobody expects Alex Witherden to step into his role and fill his shoes, he really isn’t being given the opportunity to do so. The Eagles will always fault to Hurn – he is their premiership captain.

In light of these retentions, it appears the West Coast hierarchy is convinced this team has what it takes to contend again in 2022. Truth be told, I have believed that they could contend in 2019, 2020, and 2021… but I also believe they are nowhere near as strong as they were in those seasons.

All going well, and injuries kept in check, could this Eagles team surprise in 2022? Could they recapture the form that saw them as the only team with a game plan that looked like upsetting the Richmond wagon that rolled on through 2019?

Or is the kick-mark, precision game style now something that teams have covered off?

A lot has to go right for West Coast to be the team they hope to be in 2022. A team with the majority of its stars aged 29 or over is a team that is no longer performing at its optimum. This is the age where those years of little niggles and aches become two or three-week injuries. McGovern, Sheppard, Shuey, Redden, Naitanui, Cripps, Darling, Gaff… they’re all 29 or over – there are not many players who actually improve after turning 30.

The 2022 season looks to be an all-or-nothing endeavour for the West Coast Eagles. Since surprising to win the 2018 flag, even the most one-eyed supporter would have to agree that this team has underperformed. They’ve played three finals since – they’ve won just one of them.

With a top-heavy list, you would be a little comforted if you looked at the names of players and saw some genuine stars in the making in their 23-and-unders, however, it is difficult to look at those blokes and, outside Oscar Allen, point to anyone you’d bank on as a future top 20 player in the league.

That last point emphasises that this is a make-or-break season for the Eagles. The talent is there at the top end, but the drop off is significant. They are in a similar boat to Geelong in many respects, only without the consistency of the last couple of seasons.

Can West Coast rally and have one last shot with this list of players that’ll see several sit amongst the greatest Eagles to pull on a jumper? Can they stay healthy long enough to capitalise on the dominance of Nic Naitanui, the forward class of Kennedy and Darling, and the stoic defence of Barrass, Hurn and McGovern?

At their best, these Eagles could really give it a shake, but if the hunger is not there… if the will to go the extra mile is not there, it will all be for naught.

So, it’s easy to criticise and offer no solutions, right? Of course it is. So, what do the Eagles do to turn things around in 2022? What are their markers for success?

Statistically, we should look for the following indicators.

Finally, there can be no Kardinia Park-like blowouts in 2022. At the first sign of one, you can stick a fork in the West Coast Eagles – this era will be done. The 2018 premiers have to find a way to work through bad days and start winning ugly if they’re to have this one last shot at glory.

Where do you see West Coast finishing in 2022? Is there enough in the tank to have one last shot at making this era special? Or has their ship sailed?