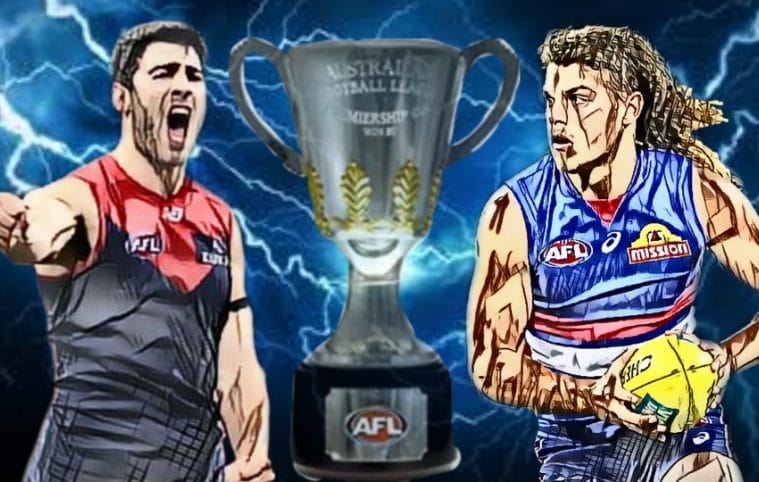 Hours away, people… here’s what the Mongrels think. Make sure you add your predictions in our Facebook comments. If you’re closest to the pin with winner and margin, I’ll throw a yearly membership your way. First in with the margin will get the chocolates if two people predict the same thing – HB

Margin: 38 points in a late blowout.

Best Moment: Ben Brown fkn launches one for a 60m goal after the siren at the end of one of the quarters.

Perth streets run red with spilled cab sav as a riot of Demons fans conduct smash-and-grab raids on boutique fromageries. Three people are caught, and are now being represented by 327 lawyers who were also present at the event.

Best Moment: Jack Viney changes the momentum of the game with a bone crunching tackle on Marcus Bontempelli

Break out the Gouda as Demons break the dry spell with a win in the West.

Best Moment: Crossing to Neale Daniher post game with past players and commentators alike are in tears.

Melbourne will be lauded as a rising superpower as their speed and strength around the ball proves too much for a weary Dogs outfit.

Best Moment: Aaron Naughton, well-held for most of the night, comes through with an enormous leap over both Steven May and Jake Lever midway through in the last quarter to give the Dogs back the lead.

We will be treated to the best Grand Final in the history of Australian Rules Football. Close in tight, bodies on the line, with consistent patches of free-flowing football. This is a game that will go down to the last minute.

Best Moment: Cody Weightman, after flying for everything that comes near him through the first three quarters, finally gets a launch and plucks a screamer 45 metres out halfway through the last to give the Dogs the lead, which they don’t relinquish

A true beauty for the neutrals, this one. If only we hadn’t had to wait two weeks for it. These two clubs go hammer and tong at one another setting up a rivalry that will last well into future generations

Norm Smith Medal: Aaron Naughton (to kick 6 in a losing side and be the best forward on the park)

Best Moment: Max Gawn repeats his heroics with another 60-metre centre square bomb for goal in the second half to put the Demons in front.

Another classic Grand Final in store (we hope). With no players over 200 games for either side, is a long-term rivalry brewing?

Best Moment: Ed Langdon goes for a run down the wing, pursued by Bailey Dale, and hits Ben Brown lace out after a 5 bounce sprint.

This should be a Grand Final for the ages, but don’t be surprised if it isn’t. Both sides are capable of blowing teams away, so don’t be shocked if the margin is 40+ either way.

Best Moment: Cody Weightman draws two too-high free kicks in five minutes and the AFL public collectively lose their shit. Except for Bulldogs supporters… who love will it.

Build up for this has been insane. Two weeks to wait… I hope this game is worth it. Two best sides of the year, big crowd, no bloody masks… bring it on.