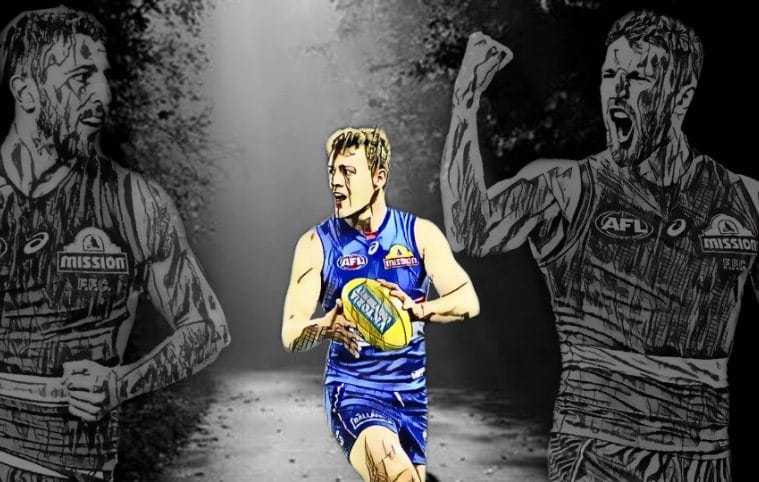 Out Of The Shadows – Jack Macrae

Gary Ablett Senior and Gordon Coventry share the record for most goals kicked in a V/AFL Grand Final, with nine. It’s the type of record you can see standing for a long time – it has been 24 years since a player even snagged six goals in a season-decider – that was the incredible Darren Jarman way back in 1997.

Since then, a few bags of five is as good as we’ve got, which would lead you to believe that the record of Coventry and Ablett is pretty safe.

I’m a big fan of little things in the game we love.

There’s nothing I like better than finding a little tidbit to focus on during a game that adds to the overall enjoyment of the AFL Grand Final. Some get their kicks via a wager or two and that’s fine. Me… I like to look at records and who has the best shot at breaking one.

As we head into the 2021 decider, one stat that jumped out at me as strange is that no player had ever hit the 40-disposal mark in a game. Sounds crazy, huh? In the modern game, where midfielders rack up touches like Joe Ganino standing at the MCG urinal, you’d think at least one of the elite mids would have broken out for a monster game, possession-wise, right?

Simon Black currently holds the record for the most disposals in a Grand Final, with 39 touches back in 2003 as part of the all-conquering Brisbane Lions. Since then, we have had players go through seasons averaging 37 touches per game, but none have ever been able to crack 40 on the biggest stage of them all.

I have a sneaking feeling that this may be about to change, and should the Western Bulldogs topple the Dees on Saturday, we could be seeing the game that finally allows Jack Macrae to emerge from the shadow of Marcus Bontempelli.

Oh, he has already emerged, right? I heard you thinking that. How so?

Sure, he has three All-Australian selections to his name, and that is impressive in and of itself. However, in terms of Best and Fairest awards… Macrae has none. Even earlier this week, despite having an incredible season, Macrae found himself with just 14 votes – the lazy 19 behind his captain, and beaten by players such as Ben Cunnington and Tim Taranto. Don’t get me wrong – these blokes are both fantastic players, but their seasons waned in comparison to that of Macrae, who dipped below 30 touches per game just twice in 25 games. A return of 14 votes in a season like the one Macrae has just produced is almost insulting.

Such is life in the shadows.

Macrae’s run in 2021 has been incredible – unlike Touk Miller at Gold Coast, who had 17 games in excess of 30 disposals, Macrae actually has genuine competition within his own team when finding the footy. Bont, Libba, Dunkley, Treloar… they all have the ability to register 30+ disposals on a consistent basis as part of the Dogs’ midfield, but it is Macrae compiling the consistent numbers week-in and week out.

The question to me is not whether Macrae tops 30 disposals in the Grand Final this week, but what number he ends up on when the siren sounds? Players like him simply do not shrink in these moments – he knows no other way but to hunt the footy and find it successfully.

Here’s some food for thought.

According to our old pal, Wikipedia (yes, I donate $2.50 to them here and there… but I have noticed they are now asking for $2.75… cheeky buggers!), nine players have registered 35+ disposals in a Grand Final. Five of those have been in a winning team, and two of those five have gone on to win the Norm Smith Medal – Black in ’03, and Luke Hodge in 2014. With 37 touches in the 2014 side, Jordan Lewis must think himself a little hard-done-by.

Perhaps we are poised to add Macrae’s name to the list of worthy Norm Smith recipients?

Of course, a lot of water has to go under the bridge for this to occur. To begin, gathering big midfield numbers in a losing team seldom sees your game celebrated. Kane Cornes and Matt Crouch had 37 touches apiece in 2007 and 2017, respectively, but no one ever speaks of their efforts. Simply put – you don’t remember much about the team that runs second. Winning the damn game comes first.

Secondly, he almost has to Out-Bont his captain. By saying that, I mean he has to make his disposals count. There are none better in the game at grabbing the footy and heading inside 50 than the Bulldogs skipper. He is an offensive juggernaut when allowed space anywhere near the centre of the ground, and those long left foot bombs he unleashes inside 50 make for some very nervous opposition defenders.

Finally, he needs to hit the scoreboard. Not heavily, but a goal or two to punctuate the hard run and creativity – again, a strong suit of his captain, and the man who blocks out the sun in terms of recognition at the Dogs.

Whilst yes, this remains a team game, and the glory of the unit as a whole remains paramount, the game of Jack Macrae on the weekend will go a long way to establishing whether he is ever able to step out of the shadow of the man who has captured the imagination of the football world for years. Can Macrae make the next step and play his best game on the biggest stage in footy?

Or does he slot into the support role once again?

We won’t see a bag of nine kicked this week. We won’t see a five-goal quarter as we saw from Darren Jarman in 1997 to power the Crows home, but we could see Jack Macrae do what he does best, find the footy and crack 40 touches in a game.

And if he walks away with an extra bit of silverware around his neck, it will be well-earned.

Nobody Cheers For Goliath – The 2021 Western Bulldogs