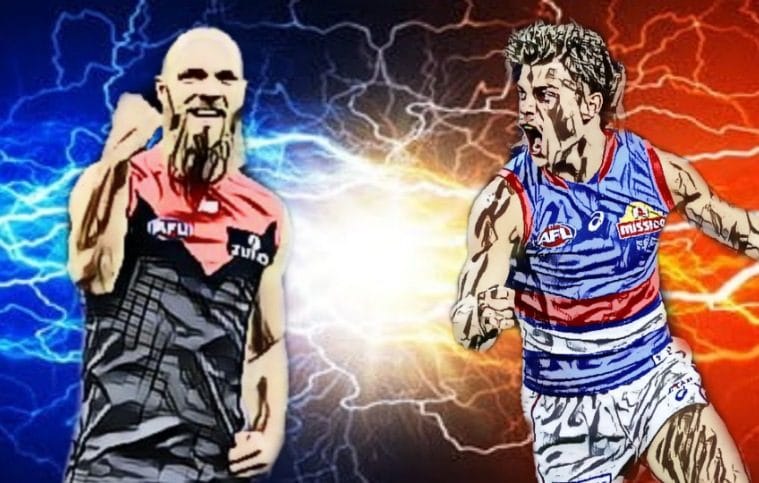 The Double Thumpings… And What Happens The Week After?

After the Bulldogs and Demons dispatched the Power and Cats respectively last week- and maybe even by half time in those respective games- eyes were looking towards this Saturday’s Grand Final.

What I wanted to know was whether or not there’s anything to be learned from history. You hear often about how teams rebound after a bad loss, but how do teams press on after a big win? That’s something that you hear less about.

The last time two teams faced each other where both were coming off 60+ point wins was round 23, 2019, which might as well be forever ago. West Coast had beaten GWS by 61, whilst Hawthorn had beaten the Gold Coast by 70. The teams were fifth and (equal) first at the time, the game was in Perth… need I say more?

Anyway, it’s going to happen again next weekend for just the 25th time in the last 20 years. Games where teams win by 60+ points aren’t rare, per se- 17% of the 3840 games in that time frame have had that kind of margin, but games between those teams… not so much. It’s just a bit more than half a percent, give or take, but is there anything that you can learn by analysing the results of how teams play after they’ve just thumped someone? What about when the team they’re about to face has done the same?

As for methodology- and for the sake of transparency- this is the result of looking back over the results of every game since Round 2 2002, when the longest serving AFL player (Shaun Burgoyne, albeit only technically) made his debut. All the 60+ point wins were charted, as were the results the following weeks, with allowances made for byes – either in the season or in the finals. I chose 60+ because 10 goals felt like a good low end for a thumping.

For any interested parties, the AFL’s biggest year for thumpings was 2012, where just under a quarter of every game played was 60+ points – which might be a result of it being GWS’ debut, and Gold Coast’s second season. There aren’t many quirks in the data, but that’s one of them.

The standout stat is that over the last 20 years, the average margin in those 24 games coming off a thumping is 41.4 points. The biggest win in those 24 games is 70 points (Sydney over St. Kilda, Round 21 2016) and the smallest is 1 (Sydney over West Coast in the 2006 qualifying final). The biggest margin overturned from the previous week was in R18 2006 – St. Kilda coming off 103-point win and losing to West Coast by 39.

What this means for the upcoming Grand Final is that literally any result is still in play, which feels like (and would be) shithouse statistical analysis, so here are the most interesting insights once you’ve got the basics down.

In two of the games between Hawthorn and Geelong in 2014, both teams were coming off 60+ point wins. In Round 4, Geelong had beaten West Coast by 75, Geelong had beaten Gold Coast by 99, and in their Round 5 match up Geelong prevailed by 19. In their Qualifying Final game, Geelong coming off a 65 point win over Collingwood, Hawthorn coming off a 62 point win over Brisbane, this time Hawthorn got up by 36 – then, they played a Sydney team who’d won THEIR prelim by 71 points, and beat them by 63. What does that say? Hawthorn stood up when it counted, and did so against an (at the time) white-hot Sydney team.

The average margin in these 10+ goal win games is 80 points, but the average margin the following week is a 13 point win – which would suggest that teams, maybe, take their foot off the pedal the following week. However, it is important to remember that the margin in games where both teams won by 10+ goals is 41. Does that mean that we’re looking at an irresistible force versus immovable object situation? If so, this might be an extremely combustible game ahead of us.

I’d be remiss to not mention the scenario both teams are dreading – and, as a neutral, it’s not a jinx to bring it up- 2007. For those who don’t remember, or, to bring it up for the hell of it, Port won their Prelim by 87 and lost the Grand Final by 119. If you don’t have a calculator handy, that’s a 206-point difference between the win and the loss. No games, in fact, have even come close to that swing in the last 20 years, only West Coast’s 180-point swing gets near it- and that was in 2003. The biggest swing since then was in 2015, when the Bulldogs (huh…) beat the Demons (HUH!!!) by 98, and then lost to West Coast by 77 – in Perth, of all places.

To zero in on the upcoming game, in the last five years Melbourne’s average result after a thumping is a 40 point win, including a run where they won by 69, 109 and 91 in successive weeks back in 2018. The Bulldogs average a 23 point win after a thumping, but just this season they beat St. Kilda by 111 and followed it up with a 28 point loss to Melbourne.

In summary, such as it is, games like this are a coin toss. It’s clear that games between teams who’ve both thumped someone have a higher margin than teams who’ve thumped someone and go onto play someone who hasn’t just done the same. There’s historical precedent that it could get a bit weird, and just this season the Bulldogs have thumped someone, played Melbourne, and lost. There’s a bit of weird juju in the numbers, and I think it leaves the game as a coin toss at the start, but whoever gets an early run on is likely to hold on to it and pile some points on.

FULL TABLE OF THE DOUBLE THUMPINGS