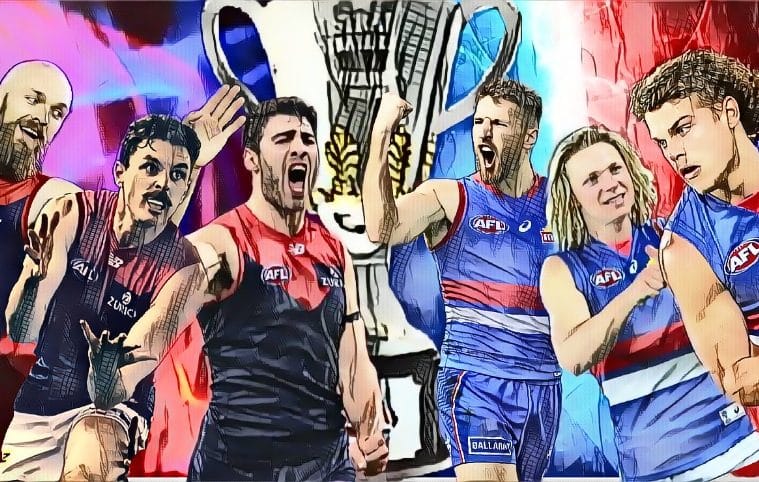 In a week’s time, we’ll all be settling back into life after another AFL season impacted by Covid comes to a close. Either the Western Bulldogs or Melbourne Demons will reign supreme and claim the flag. Either result will provide a mountain of stories, both bad and good.

For the Dogs, it will be a great redemption story after falling away following the fairy tale 2016 triumph. For the Dees, we’re looking at a drought-breaking chance that will enshrine these players in blue and red immortality.

However, as the attention of footy fans slowly shifts from the events of the last game of the season to free agency, trades and the draft, there will be stories within the story to tell and retell, all stemming from the game that will define the 2021 season.

Be they of the Demon or Bulldog variety, there are simply too many great stories to ignore coming into this game. Let’s get to the bottom of just a dozen or so of them.

Before I break down individual team and player stories, one story that is applicable to both teams across the board is the maturation of the players at the top of the tree.

The Dees were deers in the headlights in 2018 when they were walloped by West Coast in the Preliminary Final. It was a measured, calculated and disciplined unit that went back to the same venue and erased all thoughts of that reoccurring against the Cats this season. So impressive were the Demons that Geelong looked inept, beaten to the footy, beaten on the inside, and beaten on the outside.

The Dees showed a maturity that was lacking three seasons ago, and in a definite case of boys becoming men, it was the kids of 2018 that led the way. Oliver, Petracca… even Max Gawn were unprepared for what the Eagles dished up to them in 2018. They, in turn, gave the Cats a mighty helping of the same stuff in 2021.

And the Dogs… successful before their time, and very similar to the 2008 Hawks, inasmuch as they won a flag years before they were due with the list they had. Some have moved on, others have retired, but the nucleus of that premiership in 2016 is alive and well. Bontempelli, Macrae, and Dunkley are now in their primes. Lachie Hunter is providing the outside run, Caleb Daniel has continued to blossom, Bailey Williams and Bailey Dale have grown into their role, Libba is still an inside beast.

The Dogs’ flag champs of 2016 have grown into leaders, and they provide a fantastic example to those like Bailey Smith, Aaron Naughton and Cody Weightman coming through.

Rest assured, neither of these teams is a bunch of upstarts looking to surprise the world. These are now seasoned, professional teams. In short, both teams belong on this stage. Both are worthy.

This remainder of this content is for our paid members. Each week, the entry-level membership at The Mongrel gets at least two standalone articles, early access to Good, Bad, and Ugly game reviews of each final, and The Mongrel Punt Midfield Championship Belt update. Want to join them?