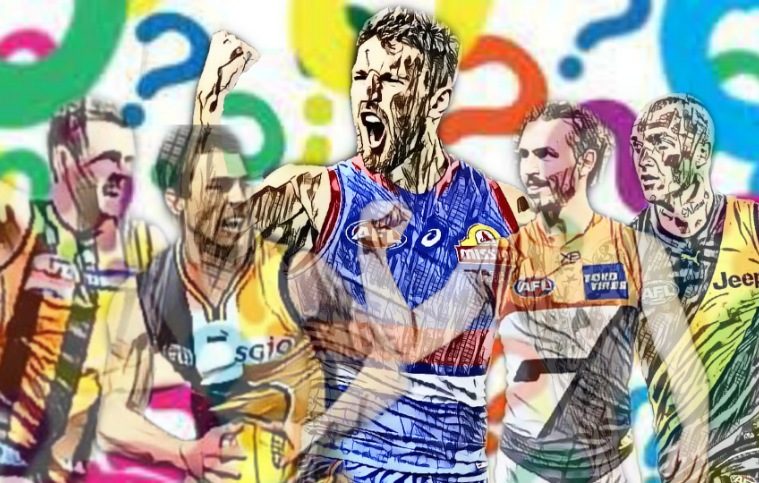 A thrilling finals series so far has been jam-packed with highlights, surprise results and heroes putting up their hand to grab that elusive premiership cup. However, it’s also been clouded by injuries to some of the biggest names in the game at a time when coaches can least afford the interruption.

Tom Stewart the perpetual All-Australian half-back flanker suffered a debilitating Lisfranc fracture in mid-August and has been a hot topic at every Chris Scott press conference since. No doubt if the Cats had managed to win against the Dees, the story would have been a big one with the unexplainable bye round scheduled for next weekend.

Similarly Bulldog champion and their highly influential captain, Marcus Bontempelli has been front and centre in all discussion around this week’s matchup against the Power. Appearing to have suffered a significant knee injury in the dying moments of their last gasp victory over the Lions, the talismanic Dog was at pains in the post-game interview to downplay the obvious pain he was in. Subsequently diagnosed as bone bruising, this will absolutely affect his preparation, both mental and physical, this week. This is not to say he won’t find a way through the discomfort as many have done before, but it is far from an ideal lead-in for this club’s most important player.

The question is often asked, and only answered with hindsight as to whether the risk in playing an important cog under the fierce spotlight of finals pressure is worth the potential reward. It often comes down to a simplified equation of whether Player A at 75% is better value than Player B at 100%. The public perception is it’s usually wise to err on the side of caution, however,  there are many examples of when the risk paid off, and below we’ll explore some of the more famous instances of when a coach rolled the dice. Sometimes it resulted in ultimate success, but also at times with devastating outcomes.

As for our two current day case studies, it is almost certain that Bontempelli will play this weekend, and his fate will depend almost solely on his pain threshold, along with a likely hard tag by Willem Drew, Stewart’s situation is now put to bed, and his unlikely Grand Final return was crushed by the Dees in the Prelim.

The greatest goal kicker in the game’s history had his only taste of that one day in September on the back of an incredible run in 1996. Lockett injured his groin kicking the winning behind from inside the centre square after the final siren in the Preliminary Final against Essendon the week prior, but nothing was going to stop him running out onto the MCG against the Kangaroos in the centenary decider.

Early on the Swans had all the play with Lockett well on top of his opponent Mick Martyn, kicking five first-half goals as North took a two-point lead into halftime. Unfortunately, the opportunities dried up in the second half and Lockett was only able to add one more goal to his final tally of six goals, one behind from eight disposals and four marks. With a season average of 5.5 goals, the risk was more definitely worth running by rookie coach Rodney Eade, however, wasn’t enough to halt the exuberant North from breaking their own premiership drought.

The enigmatic Steve Johnson already had a Norm Smith Medal in his kitbag from a five-goal haul in the history-making 2007 triumph, but as 2011 rolled around he was waylaid with a knee complaint. Facing an impressive Collingwood aiming for back-to-back premierships, first-year coach, Chris Scott threw caution to the wind and backed in his man, who returned the faith in spades as he ran riot booting four goals in a more forward-centric role. A seven-point three-quarter time lead was extended to a comfortable 38-point victory as Stevie J twisted and turned Magpie hearts inside out to finish with 4.2 and five tackles in a brave performance that could have conceivably resulted in a second Normie.

Probably the least feted but integral member of the famous Lions Fab 4, Lappin endured broken ribs in the lead up to the 2003 Grand Final against the Magpies. With expectation high that the 2002 result would be reversed, coach Leigh Matthews trusted his player who repaid him in kind as the Lions flipped the script to physically intimidate their fancied opponents running out winners by 55 points.

While ultimately Lappin recorded 19 disposals and seven marks, admittedly well down on his season averages, the mental toughness to front up was indicative of the Brisbane three-peat era and would have boosted the morale of his teammates on the ground.

With a club so bereft of success it was always going to require sacrifices of superhuman level to again reach the summit, and in a match of incredible feats perhaps none exceeded those of hard-nosed defender, Dale Morris. Later discovered to have been playing with a fracture in his spine, Morris manfully took on the biggest task in football by standing the imposing Lance Franklin in what was supposed to be the Swan’s greatest moment and stared him down. The fairy-tale 22-point victory would not have been possible without the lion-hearted efforts of the Bulldog favourite who recorded 15 disposals, above his season average, ten intercepts, six one-percenters and a desperate tackle on Franklin in that frenetic last term that spilled the ball loose for Tom Boyd to put an emphatic exclamation point on the flag.

The Hawk dynamo suffered a horrible run with hamstring injuries during the 2014 season, his third strain leaving him on the sidelines for eight weeks and completely destroying his finals lead up. For such an explosive athlete the chances were high he would be a liability on the hottest stage of all, but the Hawthorn coaching group alongside their medical team were confident if he could get through a half of the Box Hill Grand Final on the Sunday prior he would be right to go.

As it turned out Rioli was selected and not as the sub as assumed, but in a reflection of underdog Hawthorn’s intent, inside the centre square for the opening bounce. While he didn’t hit the scoreboard or collect a stack of disposals, the deft touches, tackles and goal assists set the tone for what was probably the greatest single team performance in the game’s rich history.

By this stage of his Eagles career much of the lustre had already worn off, as fans and officials alike had grown tired of the off-field controversy. With a 13-game suspension for his bridge-gate incident and an increasingly fragile body belying his ability to still contribute at the highest level as his season average of 25-disposals would attest, he was selected for an Elimination Final at Football Park against the Grand Final bound Power.

He started well with 11 early disposals, but the strain of pushing to his regular standards on limited preparation proved too much and his hamstring gave way, torn from the bone in a sorry final act as a West Coast Eagle. This match was also noteworthy for the first appearance of his iconic Ned Kelly inspired ‘Such if Life’ tattoo.

The Giant co-captain can be forgiven for doing everything possible to lead his team out on their debut Grand Final appearance against a vengeful Richmond, but the sight of the key defender completing a fitness test on the ground prior to the game can’t have been good for the confidence of his teammates. So it proved as the young GWS side was comprehensively jumped after scoring the first goal of the game with the result all but finalised by halftime.

Davis, himself, was able to collect a commendable 15 disposals and nine marks, but not a single tackle and most of these were collected in the somewhat meaningless second half as the Tigers cruised to a monster win.

Will rightly go down in history as one of the best big game players of all time as his two Norm Smith Medals and further two GFs were he received votes can attest, but the cliff hanger 2012 finale will not be remembered as fondly. A late withdrawal from the heart-stopping Preliminary Final the weekend prior nominally with a virus (the injury turned out to be a torn PCL), Hodge was definitely underdone when he was selected to lead his side against the upstart Swans.

Only contributing 17 disposals at a lowly 64% efficiency, three marks and one tackle, with no scoreboard impact down from career averages in Grand Finals of 28 possessions, eight marks and almost four tackles could certainly have been the difference in a ten-point game.

After sweeping the AFL world before him in 2017 winning the Brownlow, ALFCA and Leigh Matthews Trophies, along with the Norm Smith and Gary Ayres Medals, Dusty was the biggest name in the game and continued to run roughshod over the competition. Entering the Preliminary Final against Collingwood considered a fait accompli for the Minor Premier Tigers on the way to steamrolling another flag, Martin averaged over 26 disposals, almost five marks and 1.4 goals per game.

A knee injury hampered him in the lead up and once the game started it was immediately apparent that this would severely hamper both he and his side’s hopes of success. Unable to generate his usual power in the contest and well held by Levi Greenwood, Martin succumbed to only nineteen touches with five clangers and couldn’t deliver his usual goals in forays forward.

This one is more a throwback to a forgotten era when Tiger coach Francis Bourke physically challenged Malthouse on the eve of their blockbuster playoff against sworn enemy, the Blues. Malthouse, recovering from a dislocated shoulder was desperate to play, Bourke desperate to prove him fallible assaulted him time and again in a post-training workout more commonly seen inside an octagonal cage these days, until the brittle joint again popped out of its socket.

Malthouse was left in agony and the Tigers, despite favouritism, were overrun in the second half by the Carlton mosquito fleet of which Malthouse would have been equipped to prevent and Bourke was subsequently fired sending the Tigers into an abyss for 35 years.