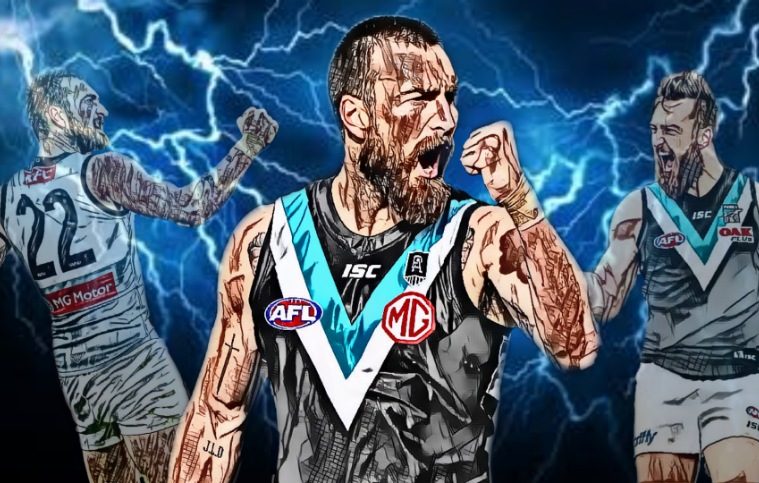 What If… Charlie Dixon

Yes, yes, hold the pitchforks, I know I’m comparing the now 30-year-old Dixon with a bunch of (relative) kids. However, as the adage goes, however, you just can’t teach size.

That’s what makes watching Charlie Dixon such an experience. You watch him and you know intuitively that if he could just put it together, he’s either unstoppable or someone’s going to need to do some serious work to plan to stop him.

That’s the problem that a, suddenly Alex Keath-less, Western Bulldogs have for their upcoming win-or-go-home preliminary final clash against the Power, and if you’ll forgive the cross-sports analogy, there are worse blokes for Bevo to emulate than Toronto Raptors coach, Nick Nurse.

That’s because the closest basketball analogue to Charlie Dixon is recent NBA champion and Finals MVP Giannis Antetokounmpo, who’s 211cm and 110kg. He’s also got a 220cm wingspan, which is a stat the AFL doesn’t record (that I can find) but it’s helpful in this regard. If Dixon’s big, Giannis is huge. Similar to Dixon, he’s made a career out of being the most dominant player on the court, and recently he’s leaned into that to great success.

By which I mean, of course, if you’re that much of a walking mismatch, why not make the most of it? If no one can stop you, why not just let that happen?

AFL and basketball manifest themselves differently, but there are a few parallels. You could argue that the rules are slanted in favour of the team attacking, so a planted Dixon contesting for a mark is more likely to get a free than the man contesting with him just in the same way Antetokounmpo will draw a foul for running someone over driving to the rim rather than the player being run over. You can’t even double him up, as Port have a two-man ruck set-up that they cycle through the forward line, both of whom are taller than Dixon.

There isn’t really an analogue for true bully ball, a basketball-style typified by the ‘grit and grind’ Memphis team of the early 2010s, in the AFL. The oval is simply too big for that to work all over the field, but in a one-on-one contest, it’s more than possible for Dixon to use his body to position himself as either taller or stronger than the player trying to outmark him. In contrast to Shane Mumford, who throws players around for fun as detailed last week, Dixon playing physically with his direct opponent would be entirely within the rules and ‘fair’ inasmuch as it can be.

It doesn’t hurt that, in Keath’s absence, the task of reigning in Dixon might fall to Zaine Cordy. Cordy might be the highest-drafted father-son pick of all time, but he surrenders five centimetres and 15kg to Dixon. If it’s Lewis Young, he’s a bit taller but 5kg lighter, and if it’s Schache he’s 13kg lighter. That’s where Nick Nurse (from above) comes in.

En route to winning the NBA Championships in 2019, Nick Nurse wrote up a whole new set of rules in order to stop Giannis. First and foremost was setting up a ‘wall’ of defenders to slow him down when he moves from defence to attack, limiting his options going either side of the defence to create a proverbial runway. Primarily, it’s in order to slow him down or stop him from using these physical tools that stand him above the rest of the players on the court. The same can be said for Dixon- keep in front, or keep him ‘contained’, don’t give him room to get a run on, or a run at the contest.

Where this doesn’t work in AFL is that, while Giannis is one of five players on the basketball court, Dixon is one of six forwards. If you block Dixon, you likely open up one of Ladhams or Lycett, Todd Marshall, Robbie Gray, what feels like any number of small forwards. The ‘Giannis rules’, however, are provable as Eric Spoelstra did it again the next year to stop Giannis getting past Miami.

In short, it’s not as simple as being bigger = win. At times, however, it feels like it can be, and that’s what makes Charlie Dixon such an important player. Maybe Bevo overcommits to stopping Dixon and leaves space open for someone else. Maybe he tries a loose man and under-commits going forward. I think Dixon has an impact beyond the immediate contest, and that’s something you can see but is otherwise intangible because it’s not like you can prove that by doing x, he causes y to happen.

In any case, as the biggest true key position player in the AFL, if Dixon can put together the tools he’s been gifted, plays with a bit of menace and uses that size to his full ability to ‘grit and grind’ his way to four or five marks inside 50, you’d back him to make the most of those opportunities. He’s averaging two goals a game for the year, but playing with some more aggression to really make the use of those gifts? Could be five. Could be more. Could be the difference, if it all comes together.